Scotty's Sharin':.....it still does not compare with the timeless beauty and elegance of Dean's former home. Hey pallies, likes today we are goin' to take 'nother  bit of a break from our centennial celebration of The Day That Coolness Came To Earth that keeps fabulously featurin' the hugest of huge homage of our most beloved Dino on the 100th anniversary of his descent to our planet for a immensely important reason.  Our deepest of deeply devoted to Dino pallie, Scotty has shared his first Dino-centric post in nine months over at his beautiful blog "BlueisKewl" and we wouldn't think of waitin' 'nother day to share it with all youse Dino-holics.

Our pallie of pallies Scotty-o is one of a select few cooler then cool commentators postin' potent patter on many many of our ilovedinomartin offerin's for which we are greatly greatly grateful, and we completely cherish his stellar support of our eager efforts in lovin'ly liftin' up the name of our one and only Dino.  So when we happened 'pon his recent Dino-offerin' we simply had to stop the presses to share it with youse Dino-philes.

Likes we gotta 'fess up that the ol' net has been sharin' post after post on the remake of our Dino's last estate tagged "Trousdale" and we have completely resisted postin' any of 'em 'cause of our on goin' celebration of our Dino's beloved birthday...and truth be told, we ain't appreciate of or impressed by the dismantlin' of our King of Cool's last residence.....to our way of Dino-thinkin' it's a desecration of our Dino's legacy...but, then, we ain't in the position of havin' the bread to have saved it from the wreckin' ball either.

So, likes in absolute appreciato of our Scotty-o's super support of ilovedinomartin, we share with you 16 images that Scotty has assembled of the new mansion followed by a powerful pix of the original Dino-mansion and of course we absolutely 'gree with these thoughts that Scotty's has valiantly voiced..."While the new home is very ritzy and is sure to have every single bell and whistle, it still does not compare with the timeless beauty and elegance of Dean's former home."

Hats off to our Dino-devoted pallie Scotty for this Dino-gram with the hugest of hope that this will be the return of many many marvelously delightful Dino-grams to come soon from his pen.  To checks this out in it's original source, simply clicks on the tag of this here Dino-gram. 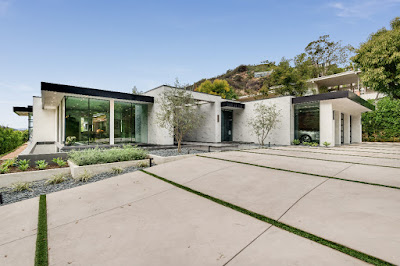 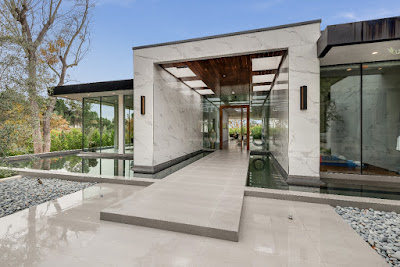 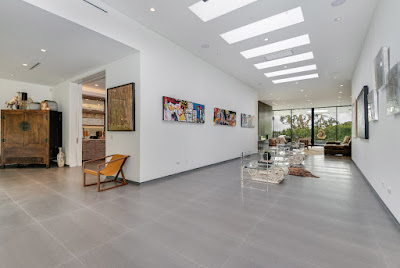 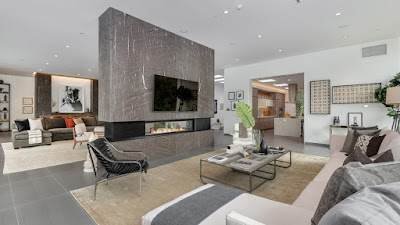 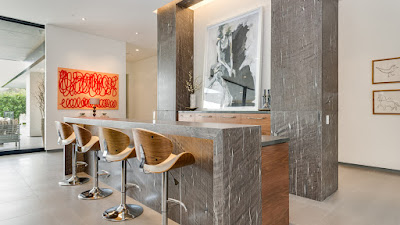 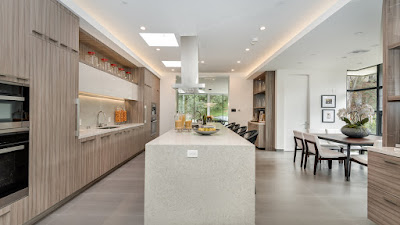 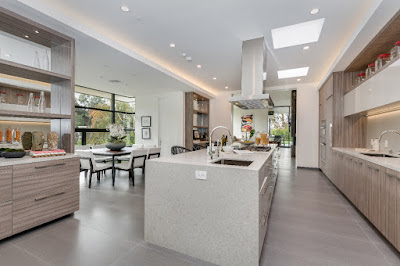 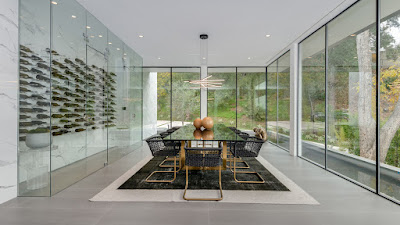 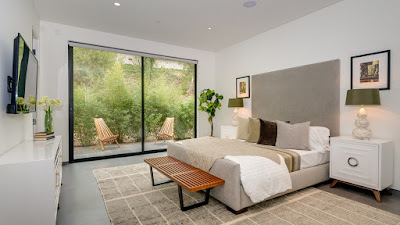 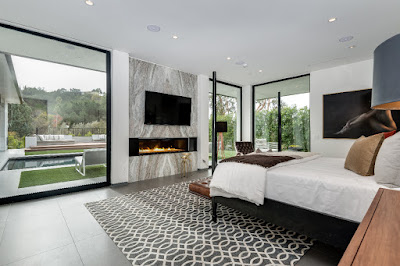 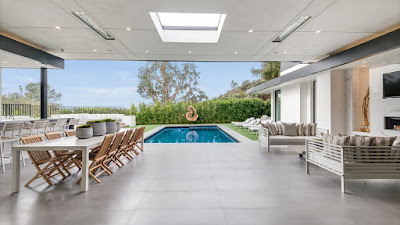 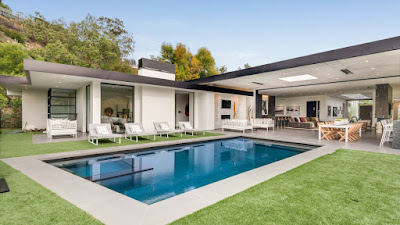 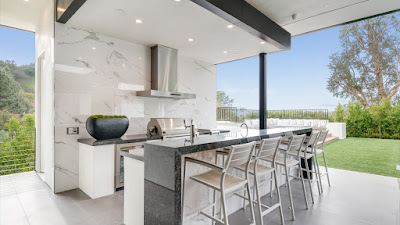 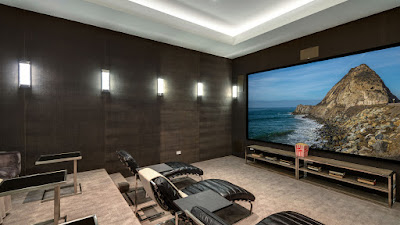 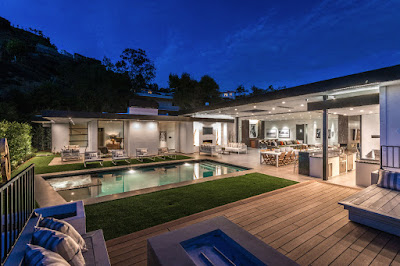 (While the new home is very ritzy and is sure to have every single bell and whistle, it still does not compare with the timeless beauty and elegance of Dean's former home.)

Entertainer Dean Martin rose to fame in the 1950s and ‘60s with hits such as That’s Amore, Everybody Loves Somebody Sometime, and Ain’t That a Kick in the Head? as well as for his involvement with the hard-partying Rat Pack, the renowned group of entertainers that also included Frank Sinatra, Sammy Davis Jr., Joey Bishop, and Peter Lawford. In his later years, Martin resided in a posh Beverly Hills estate that was frequented by his famous friends. Though Martin’s former home has since been dismantled, a newly constructed spec mansion now occupying the site pays homage to the Rat Pack with a slew of glamorous amenities and entertaining options.

Perched above the canyons in the coveted Trousdale Estates neighborhood in Beverly Hills, the home features hints of mid-century modern architecture that recall the original structure as well as state-of-the-art amenities worthy of a modern dwelling. A 200-foot-long driveway leads to the ultra-modern, glass-walled home. A floating entryway surrounded by water features and stunning marble walls leads into the open-concept home. Spread across more than 10,000 square feet, the five-bedroom home features 12-foot ceilings, skylights, and walls of glass that blur the lines between inside and out-of-doors.

Outfitted with modern appliances and a large island, the gourmet kitchen is adjacent to a dining room with a striking glass wine cellar. A floor-to-ceiling fireplace serves as the focal point of the living room, and sliding glass doors lead to an outdoor oasis. In the backyard, amenities such as a pool, fire pit, deck with built-in seats and a fire pit, and an outdoor kitchen with a barbecue, refrigerator, and beer tap make it easy for residents to host parties that would have made the original Rat Pack proud. The glamorous home is currently listed for $27.95 million. (Inquiries: Coldwell Banker. Jade Mills, 310.285.7508; coldwellbanker.com)


Dean Martin (born Dino Paul Crocetti; June 7, 1917 – December 25, 1995) was an Italian-American singer, actor, comedian, and film producer. One of the most popular and enduring American entertainers of the mid-20th century, Martin was nicknamed the "King of Cool" for his seemingly effortless charisma and self-assurance.

He and Jerry Lewis were partners as the immensely popular comedy team Martin and Lewis, and afterwards he was a member of the "Rat Pack", and a star in concert stages, nightclubs, recordings, motion pictures, and television. He was the host of the television variety program The Dean Martin Show (1965–1974) and The Dean Martin Celebrity Roast (1974–1984).

Martin, a heavy smoker, was diagnosed with lung cancer at Cedars Sinai Medical Center in September 1993, and was told that he would require surgery to prolong his life, but he rejected it. He retired from public life in early 1995 and died of acute respiratory failure resulting from emphysema at his Beverly Hills home on Christmas Day, 1995 at the age of 78. The lights of the Las Vegas Strip were dimmed in his honor.

Martin's body was interred at the Westwood Village Memorial Park Cemetery in Los Angeles. The crypt features the epitaph "Everybody Loves Somebody Sometime", the title of his signature song.
Posted by dino martin peters at 7:19 AM

Cool Cool postin' , Scotty! Modern luxury will never replace the vibe of actually walkin' the floors where our Pal once dwelled.

Needless to say I was completely surprised to see Dean's former estate make the headlines recently. What shocked me was the price, almost $28 million dollars, and a picture of the home. I just couldn't picture Dean living there and it didn't seem to jibe with what I had seen before. The surprises kept coming when I read that Dean's actual home was torn down to make way for this over priced modern excuse for a home. Don't get me wrong, as someone who loves homes in all shapes and sizes, it just can't compare to what was here before. I believe the builders and brokers are simply using Dean's good name to put as much money in there pocket as humanly possible. This seems to be the way things work today I guess. I just hope the new owner is someone who can appreciate Dean and everything he did.

I can't believe it has been so long since i made a post about Dean. I guess with my move, broken down computer, and other things time really flies. Thank you from the bottom of my heart DMP for all your support and kind words my friend, and thanks to Danny G. as well!

Wow what a dream home! A pallie can dream!

Hey pallie, likes Scotty-o, we thank YOU for all your swank support of our Dino via ilovedinomartin and for your kind words for our humble efforts in the cause of our most beloved Dino! Keeps lovin' 'n sharin' our one and only Dino!

According to Mansion Global: our Dino lived on the property from 1988 until his death in 1995 at the age of 78.

When I traveled out to California back in 2006, I made a point to go by that property to take a good look at our Dino's last residence. I took several photos, of course, and I just loved the appearance of the place. A traditional design -- somewhat Victorian -- but, at the same time, very upscale.

As the link I provided also says:

Before Martin, the Hollywood actor David Janssen owned the home. Janssen, who died in 1980 and was best known for starring in the TV show “The Fugitive,” even showed off the home for a 1965 Architectural Digest feature.

What a pity that a place which had previously been featured in Architectural Digest was demolished! Despite its Hollywood pedigree, “there was nothing left to save at all,” said developer Patrik Mirahmadi, who bought the aging estate in 2014 for $3.9 million, property records show.

As Scotty said: While the new home is very ritzy and is sure to have every single bell and whistle, it still does not compare with the timeless beauty and elegance of Dean's former home.

And, unless I am mistaken, the house that was demolished contained the very room in which our Dino drew his last breath while walking the earth.

Sure, this new place is a luxurious pad. But it's not the same pad in which our Dino walked.

It makes me sad that our Dino's last home was not somehow preserved.

And the irony of ironies: his last home is completely wiped away in the centennial year of our Dino's birth.

Oh, well. Money talks, I guess, and this sterile modern design in all the rage. But never our Dino's desire, I'll bet!

PS: Do a Google search of "dean martin Trousdale Estate" (without the quotation marks), and look at all the hits that pop up. Lots of Dino information in some of those hits returned by Google search!

PPS: Nicolas Cage, Dean Martin and Tom Jones Lived Here (at different times). Glorious photos at that link -- of the exterior and the interior! I found that link because I recalled that Tom Jones had once owned the Tudor mansion now torn down; I Google searched "Tom Jones's house Belair." Some of those photos would make a great Dino post -- probably several Dino posts. The address back then was 363 Copa De Oro Rd, Los Angeles, CA 90077.

Scotty,
Thanks so much for sharing this information. As you can see, I did a lot of research because my interest in our Dino's last California mansion.

One more detail about our Dino's final house:

It has a celebrity chain of title, having been owned previously by singer Tom Jones and, before that, by entertainer Dean Martin, who in 1974 had architect Gerard Colcord and his associate, Liza Kent, add a 2,500-square-foot entertainment complex to the 11,817-square-foot English Tudor, built in 1940.

I might have been wrong about our Dino's last home. See this.

I remember the Maple Dr. home as being the last home. I was on a tour while he was still alive and the tour claimed that was his house. I could be wrong, and maybe the tour was wrong. I have a picture I took of the house, I should find it and post it.

Ed,
Yes, our Dino's home seems to have been the Maple Drive home.

There is a lot of great info and I of course learned a few new things. I was under the impression that Dean's Trousdale Estate was his last home. I did not know he lived at another home in Beverley Hills when he had passed. Thank you for the info.

It is and a bit out of my price range but then everything is. :-)