Hey pallies, likes not to worry pallies, we plan to gets back to our concludin' posts in huge homage of the 20th anniversary of our Dino's departure from our presence early next Dino-week as we starts our preparations for our special Dino-amore emphasis.  But, we wants to pause this very Dino-day to say thanks to one of our most devoted-to-Dino pallies, Jesse from JUST A CAR GUY who often sends Dino-poses our way that he thinks we mighta not ever seen before.

We always always appreciate our pallie Jesse's thoughtfulness in sharin' his great Dino-discoveries with us, and below is Jesse's most recent find....a powerful pose of our most beloved Dino ridin' a bike 'long with Mr. Dewey Martin and Miss Anna Maria Alberghetti.  We're guessin' this pix was snapped while our Dino and Miss Alberghetti was starrin' together in the 1957 big screen musical "Ten Thousand Bedrooms"....our great man's first great effort on the silver screen after his exist from his partner in comedic adventures, Mr. Jerry Lewis.

The trio of stellar stars seems to be havin' a very fun time ridin' together and we are havin' a very fun time enjoyin' interestin' image of our one and only Dino.  We shouts out our thanks to our pallie Jesse, who continues to shows ilovedinomartin the deepest and purest forms of the deepest of deep Dinopalliedom in his extra efforts to get great Dino-devotion our way.  Be sure to checks out Jesse coolest of cool car blog at the link shared above, and likes to view this pose where Jesse uncovered it at the blog "Ride A Bike," simply clicks on the tag of this here Dino-report.   In Deep Dino-appreciato, DMP 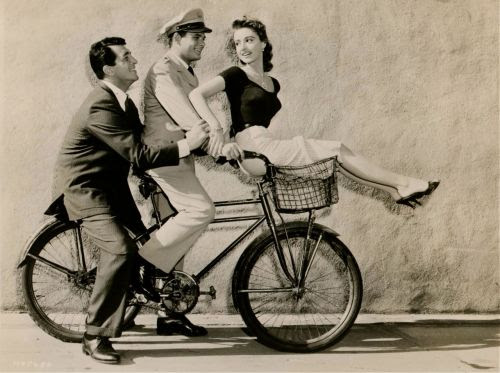 Posted by dino martin peters at 7:47 AM

Thank you DMP for bringing Jesse's wonderful Dino find our way. There is still Dino gold out there to be discovered!

Have a great week my friend.

Hey pallie, likes, and thanks you Scotty-o for stoppin' in to views it! Dino-gold is indeed all 'round us, just waitin' for some Dino-holic likes youse and we to dig it up! Keeps lovin', keeps sharin' our most beloved Dino!