Hey pallies, likes we were doin' a bit of ol' net searchin' for recent Dino-honorin' posts reflectin' on his departure from our presence 19 years 'go on December 25, 1995.  Well, we gotta 'fess up that there was a dearth of devotion from recent days that we could find (probably much uncovered as of yet), but our search led us to a beaut of a blog tagged "BaddaBlog" where blogger "Badda" shared a trilogy of amazin' Dino-posts in the year of our Dino 2005...one in April and two in December.

Likes we ain't got a clue likes why they never surfaced before, but we are deeply deeply delighted to share 'em over the next days here at ilovedinomartin.  Dino-scriber "Badda" is a conservative male hailin' from Minneapolis, Minnesota, United States and is in the Accountin' biz.  While "Badda" may be conservative in other ways, we find him liberatin'ly  liberal when it comes to his delight diggin' of our most beloved  Dino with his first post tagged "Direct from the bar… Dean Martin.

In this massive missive, "Badda" lets us know that he was just a "kid" when our King of Cool  reigned supreme in the '70s, but that he really got turned on to the Dino-sound near the time of our Dino's departure from our planet.  It's a cool tale that all youse Dino-philes are goin' to want to read for yourselves.  And, as you read, you will realized that "Badda's" appreciato for our Dino has grown leaps and bounds since his Dino-"birth."

We digs how much "Badda" craves the live recordin's of our most beloved Dino. 'cause we do too!
We are totally in awe of "Badda's" desire to make sure those near and dear to him grow in knowin', lovin' and honorin' our Dino with these magnificant musin's.....

"Already some folks have begun to forget Dean. Younger folks never even knew him. How sad that people who profess to understand what is cool yet they don’t know about Dean Martin. If I have my way, my nephew and my son will know. They’ll stand up to give a speech in class… they’ll look out at the cynical, know-it-all faces and say, 'ow did everybody get in my room?'"

ilovedinomartin salutes "Badda" for so openin'ly and passionately sharin' his diggin' of our King of Cool, and likes we are so so sorry that it has taken us so long to honor his efforts in the 'cause of our Dino!  To checks this out in it's original format, simply clicks on the tag of this here Dino-gram.  And, be sure to checks back on Monday for more Dino-amore from "Badda."  Dino-awed, DMP

Direct from the bar… Dean Martin 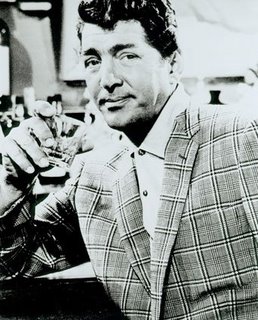 I was only as aware of Dean as a kid my age could be while he was alive. When his show was on in the 70s I seem to recall that my family watched the show. I suppose I knew that he sang Volare and Amore… and that he seemed drunk in his performances.

I have no idea where I heard that he died… in fact it was a little before the time that he died that I started to listen to his music. Friends of mine organized a black tie cocktail party and we listened to some of the great music from Dean’s era… Louis Prima, Tony Bennett, Bobby Darin, Peggy Lee, Louis Armstrong, and of course Frank Sinatra. That was the birth of it for me… the emergence of Dean’s great songs that weren’t just tunes that painted him as an Italian crooner. I loved it. Maybe I just wanted to connect with a simpler time or an era of cool.

What a Johnny Come Lately I was.

Eventually, I found a recording of the Summit (the Rat Pack) from the Villa Venice shows. Later I got the Rat Pack at the Sands… then Dean Martin at the Sands… then The Rat Pack in St. Louis (with Johnny Carson!)… and another live recording of the boys at the Sands. That seems to be all I can get. Even if more recordings surface, they often did the same act over and over. They could back then, and why not? The act wasn’t televised (except for the St. Louis show) and they didn’t have satellite channels or DVD back then (let alone cable-TV and VHS).

In any case, the live shows feature some great antics from the guys… Dean starts and he’s great. I had not remembered that he changed the lyrics of songs. He also did that with Frank later in the show under the premise that they would sing some songs from their non-existent kiddie album. Of course, he does the drunk routine… he always did the drunk routine. “I don’t drink anymore… I freeze it now and eat it like a popsicle.”

Dean’s opener in the recordings at the Sands uses “I don’t care if the sun don’t shine / I do my drinkin’ in the evening time / when I’m in Las Vegas”… but the best set of lines (and they still put a grin on my face) come later. “A wife in Vegas, take my advice / It’s like goin’ to China with a sack of rice.” He never makes it through June in January with more than a line or two straight… and for that he takes some flack from critics, but that was Dean’s shtick. It was good shtick, too. “Let’s Get Out of the Wheat Field, Mabelle, We’re Goin’ Against the Grain.” “Are you sure everybody was playing?” “Get any on you?” “Have I ever asked you to hold it?” “Give me a ch-ord… that’s how it’s spelled, honey. I say it the way it’s spelled.” Some of the oldest jokes in the book, even back then.

When Dean joins Frank they really get going. Frank sets Dean up for all of the drunk jokes… and it’s like clockwork. Tight as a drum.

Frank: I want to talk to you about your drinking.
Dean: What happened, did I miss a round?

Frank: Are you cognizant of the fact –
Dean: Am I what-nizant?
Frank: Cognizant. I didn’t say anything dirty.
Dean: It started out dirty, Frank.

Dean: Let’s have a drink.
Frank: What? You are drinking.
Dean: Oh, is that my hand?

Frank: I figured out that the only time you don’t drink is when you’re asleep.
Dean: Don’t bet on it. I now put it in the Vaporizor and the whole room is drunkified.

These, too, are the oldest gags in the book, but they work. I never really tire of them. Whenever the day is dragging along, or I’m having a rough time I can usually get an instant smile when I think of these gags.

At the end of Dean’s disk at the Sands he once again fools with the lyrics. He closes with Mr. Wonderful, but the joke is that he’s singing it about himself… “I must admit in all honesty / Mr. Wonderful, (this takes a lot of guts) that’s me”. Yet, he turns it around on the audience as a way of saying thanks for their wonderful applause. Class. That man had class.

Who wouldn’t want to be like Dean? He was funny and charming and talented… he could sing and act and tell great stories… he stood in the presence of other talented men like Frank Sinatra, Sammy Davis, Jr., Jimmy Stewart, Orson Wells, and so on. He looked good with them and helped good folks look even better.

Already some folks have begun to forget Dean. Younger folks never even knew him. How sad that people who profess to understand what is cool yet they don’t know about Dean Martin. If I have my way, my nephew and my son will know. They’ll stand up to give a speech in class… they’ll look out at the cynical, know-it-all faces and say, “How did everybody get in my room?”

This year on Christmas will mark ten years since Dean Martin's death. I intend to mark it with a song in my heart, laughter in the air, and a shot of booze in my glass.

What a very impressive read for sure - thank you my friend for bringing this our way!

Hey pallie, likes youse sez the Dino-truth Danny-o...just wishes it hadn'taken us so so long to discover this absolutely-sold-out-to-Dino pallie! Keeps lovin' our most beloved Dino!