Music to My Ears: Dean Martin

Hey pallies, likes today we are privileged to return to the blog, "BaddaBlog" where we share the second of blogger "Badda's" three homages of our most beloved Dino.  Scribed mid Dino-winter-month 2005, we are so so sorry that we never came 'cross these posts before 'cause they are purely passionate prose of our great great man.

Likes the tag of "Badda's" powerful post, " Music to My Ears: Dean Martin, sez it all.  While this is the shortest of his Dino-sharin's, it is centered on this Dino-holics deepest of deep delight in poppin'
into a music shop downtown on the off chance that they have some Dean Martin recordings I don't already own."  And, indeed this Dino-addict was able to satistfy his Dino-cravin's with 2---count 'em---2  cd al-b-ums that "appeared right before my eyes."

We let's you read the rest for yourselves.  We sez our thank you very much to Mr. "Badda" for sharin' his awesome appreciato for our Dino with his readership, and 'gain sez sorry for not discoverin' his Dino-scribin's before now.  To checks this out in it's original format, simply clicks on the tag of this Dino-report.  Dino-always, ever, and only, DMP


Music to My Ears: Dean Martin 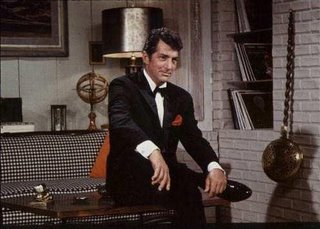 What luck! I just popped into a music shop downtown on the off chance that they have some Dean Martin recordings I don't already own. (Not that I have a lot, I just try to find some good live shows of his... and not many are available.)

Guess what? Two appeared right before my eyes. One turned out to be one I already own (The Essential Dean Martin), but this version (the two-disk Special Platinum Edition) includes a show in Tahoe from July 27, 1962. The other, also a two-disk collection (Cocktail Hour), features a couple of live tracks (such as "Takes Two to Tango") as well as some studio tracks I don't have (such as "You Must Have Been a Beautiful Baby") and a song with Jerry Lewis (The Money Song).

I hope to write more later this month for the anniversary of Dean's death... ten years ago this Christmas.

If you don't know much about Dean, whether you are young or old, I hope to give you what little insight I have. He should be remembered by folks who never even grew up with him... he was a true talent.

In the meanwhile, find one or two great songs from Dean (like Ain't That a Kick in the Head, June in January, or You're Nobody 'Til Somebody Loves You... maybe even a Christmas tune) and remember his contagious good humor.
Posted by dino martin peters at 7:09 AM

Very nice read - thanks for bringing this blog to us Dino fans my friend!

Have a great evening.

Hey pallie, likes Scotty, you are most welcome dude...and thanks for bein' the most faithful of faithful Dino-patter this past year....offerin' much Dino-encouragement to spur on our efforts all in the name of Dino! Bestest of bestest new year in Dino to youse and Dino-holics everywhere! Keeps lovin' our most most beloved Dino!