Hey pallies, likes as we draw oh so close to the end of our Dino-winter-month remembrances here at ilovedinomartin, we shares with all youse Dino-holics a Dino-winter-day remembrance, the last of three Dino-devotional posts from Mr. "Badda" at his BaddaBlog pad.  Scribed nine years 'go on Dino-winter-day 2005, "Badda's" perfect prose is tagged " Music to My Ears, Part 2: Remembering Dean Martin."

Likes in this third entry, "Badda" refers back to his first Dino-centered post speakin' of his childhood memories and his heart-felt wish that he knew "more about Dean while he was alive."  Truly truly many of us Dino-philes woulda echo such a Dino-desire!  We also learn that in addition to "Badda's" particular passion for live Dino-recordin's mentioned earlier,  he is the proud owner of  "about 26 volumes of DVDs with highlights from his show," obviously the Gunthy Renker discs, showin' that indeed this guy likes the rest of us Dino-addicts can't gets 'nough of our most beloved Dino.

"Badda" goes on to speak many of the details of our Dino's death on December 25, 1995 and encourages all of us that name the name of Dino to "please raise a glass in his honor sometime between now and New Year's Eve. If you're abstaining from booze you should still take part... Dean often drank apple juice on stage in lieu of a glass of scotch. ;)"

Continuin' his huge huge homage of our Dino, "Badda" shares a number of  Dino-focused tomes that he woulda encourage us to read.  We were thrilled to learn that "Badda" had partaken of Nick Tosches' greatest of great Dino-bio's, "DINO: Living High In The Dirty Business Of Dreams," and likes, of course, recommends it to anyone who desires to grow in knowin', lovin', and honorin' our King of Cool.

And, might we just mention in conclusion that  "Badda" does somethin' that we never ever remember readin' before, that bein' makin' some comparisons between President Ronald Reagan and our Dino.  Surely it's somethin' worthy of our Dino-ponderin.  We 'gain salute Mr. "Badda" for his trio of earnest efforts of honorin' our Dino and knows that many many of his readership musta come closer to our Dino through his posts.  To checks this out in it's original format, simply clicks on the tag of these Dino-throughts.   Dino-diggin', DMP 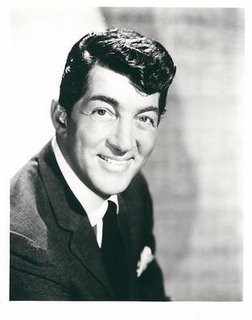 My adolescence occurred when Dean ruled television. (Perhaps you could say Dean was NBC's original Must See TV star.) His waning years coincided with my teens when I attempted to be cool (rarely succeeding). I might have appeared even more square if I would have been a fan of Dean in those days... then again, running counter to culture and respecting the class of the swing/crooner/Rat Pack crowd might have been just what I needed. (Then again, maybe not... you've either got it or you don't.)

Regardless, I never would have been able to see Dean or the other guys. I was simply born in the wrong decade. At least I was if I wanted to revel in the style (and the boorishness) of Frank's Summit and the King of Cool himself, Dean Martin. Even the reunion tour with Frank, Sammy, and Dean only lasted a week before Dean couldn't take it anymore. After Dean got out, Frank and Sammy went on to Bloomington, Minnesota... probably the Met. I was in high school. I could have seen them, but I wouldn't have seen Dino.

Ten years ago on Christmas night (3:30 am according to his obit) Dean Martin slipped away... finally able to see his boy Dean Paul after more than eight years. It is said that Dean never recovered from the death of Dino, who died in an airplane crash. (The crash happened in the same area where Frank Sinatra's mother died in a plane crash.) According to Paul Anka, after this tragedy Dean said he was, "just waiting to die."

A TV biography mentioned that the last couple of years of Dean's life included failing health and a public that mostly forgot him. He'd go to the same restaurant night after night to eat the same meal with a glass of Scotch (I believe)... if a fan recognized him and approached him Dean would be surprised that someone remembered him.

He lived alone. He was found by his housekeeper. One of America's greatest entertainers. An American icon. A performer loved around the world. He died alone... on Christmas. A man with so much talent, a man who made millions laugh and cheer, a man with seven children, a man so cool that even cool guys like Frank Sinatra and Elvis Presley wanted to emulate Dino.

No man like that should die alone, let alone on Christmas of all days.

Hopefully in the past ten years his spirit has found peace and the love of fans new and old. He's with Sammy and Frank, President Reagan, Johnny Carson, Bing and Bob, and his son Dean Paul. I can only imagine what it must be like.

I hope he still does the drunk act.

If you liked good ol' Dean, please raise a glass in his honor sometime between now and New Year's Eve. If you're abstaining from booze you should still take part... Dean often drank apple juice on stage in lieu of a glass of scotch. ;)

Why give so much attention to a guy from the old school of song, film, and television... and who has been dead for ten years? He reminds me of another great American whom I respect. President Ronald W. Reagan.

Recently, I finished reading Peter Robinson's book How Ronald Reagan Changed My Life. (He's the guy who wrote the "Tear Down This Wall" speech.) A fun read with some nice anecdotes about President Reagan (including a wonderful Italian joke that sent me rolling with laughter for more than ten minutes). If I am to believe what I've read of Ronald Reagan in various books, I see a lot of Reagan in Dean. Perhaps I should say that the two men share some characteristics.

Both seemed to love telling jokes. They came from humble beginnings. Both seemed to have the great ability to charm an audience and put them at ease. Unfortunately, it also seems that neither man gave enough to their children. Both loved their families dearly, but apparently they didn't connect in the way some fathers do. Dean kept many folks at bay, never letting most folks see the real Dean. Reagan seemed to lack many close personal relationships (certainly not with Nancy, though).

A couple of similar qualities and a couple of similar flaws. Big deal, huh? I'm certainly not making my case with just a couple of lines about these two. Maybe I am making something out of nothing, but I doubt it. We won't see men of their like for some time. It isn't a tragedy, but it is unfortunate.

Perhaps something else to write about in future.


Some of the books I've read on Dean and Reagan (with more books on Reagan on my to-read list):


Dino: Living High in the Dirty Business of Dreams
By Nick Tosches

All or Nothing at All: A Life of Frank Sinatra
By Donald Clarke

How Ronald Reagan Changed My Life
By Peter Robinson

RONALD REAGAN: HOW AN ORDINARY MAN BECAME AN EXTRAORDINARY LEADERBy Dinesh D'Souza
Posted by dino martin peters at 7:03 AM

That our Dino died alone on Christmas Morning is sad beyond words.

If you liked good ol' Dean, please raise a glass in his honor sometime between now and New Year's Eve.

And have some Dino tunes playing, too.

Hey pallie, likes Miss AOW, won't get any disagreement from us 'bout either of your Dino-sentiments! Keeps lovin' our most beloved Dino!

'nother GREAT read! I'll DEF I NATE LY be raisin' a glass, or two, in Dean's honor tomorrow night! The world is a dimmer place without out him. Salute Dino!!!

Hey pallie, likes such true Dino-hearted thoughts Danny-o. How blessed we are to have today's technology to keeps the Dino-light glowin' Dino-bright for Dino-addicts everywhere! Bestest of best New Dino-year to one of the deepest devotees of our most beloved Dino! Keeps lovin' keeps serenadin' us with Dino in 2015!

Danny G,
The world is a dimmer place without out him.

Ain't that the truth!