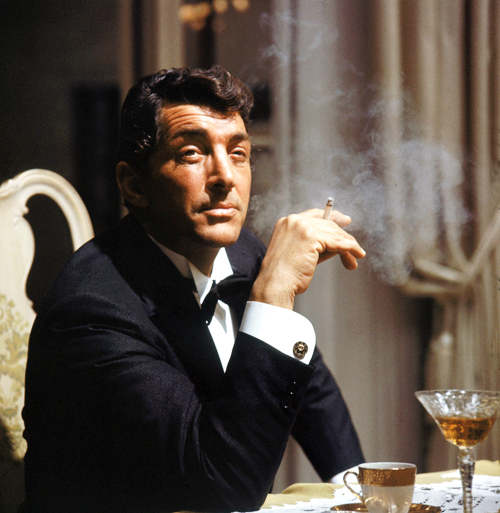 Hey pallies, likes we keeps findin' more and more web pads puttin' the accent on our most beloved Dino makin' it easier and easier for folks all 'round the globe to keeps growin' in their deep, pure, and true devotion to our Dino.  Today our little Dino-conclave takes youse Dino-holics to a simply tagged blog, " The Movie Watchers," who have posted a simply supreme vid clip of the "Official Warner Brothers Trailer" from "Robin and the 7 Hoods."

Likes pallies it is totally totally thrillin' to see some beau-ti-ful behinds the scenes action on the set of this classy classic big screen production from that great Dino-year 1964 with our Dino and his pallies Mr. Frank Sinatra and Mr. Sammy Davis Jr. havin' such a blast playin' the hippest of hip "Hoods" ever!

As far as we can tell, this is the first Dino-centric post from our new-to-ilovedinomartin movie blog, "The Movie Watchers," and likes we trust it will be the first of just a ton of entries honorin' our King of Cool.  We are likes takin' the op to also post one of what we consider the most swankest of swank Dino-poses that comes directly from this Dino-classic.  We thanks the folks at "The Movie Watchers" for sharin' this great great vid featurin' our great great man.  Dino-awed, DMP

Those were the days!

Like Danny G., I had never before seen this gem.

Hey pallie, likes you just never ever know what great bits of Dino-treasure are just waitin' for the minin'! Keeps lovin' our most beloved Dino!

Hey pallie, likes Miss AOW...exactly...those were/are the days! Glads you digs it too! Keeps lovin' our most beloved Dino!

I have not seen or herd of this movie before but it looks very good. This has to be one of the best trailers i have seen. It is wonderful to actually see the preparation that goes on behind a scene.

Thank you for bringing this treasure our way.

Hey pallie, likes Scotty, we are so happy to add to your Dino-edification...a very very cool Dino-flick for sure! Keeps lovin' our most beloved Dino!