Hey pallies, likes dudes the 6 DVD set of  "The Dean Martin Celebrity Roasts" Collectors Edition hit the shelves just a couple of days ago, and today the first review has hit the net.  From the review blog, "Blogcritics," comes  Dino-honorin' prose from the pen of Mr. John Reed.

Reed accents a couple of his fav roasts...those bein' of Mr. Johnny Carson and Mr. Jack Benny, and sez that... "The only thing that would have made the DVD set perfect would have been the inclusion of the Frank Sinatra Roast from 1978."  Indeed the omission of our Dino roastin' his pallie Frank is a sad fact, but John for some reason failed to mention that the bestest of the best roasts...that of our most beloved Dino is included in this set.

Mr. Reed like also appears to absolutely thrilled  at the bonus material included sayin'....." Rarely seen home movies of Martin are great, while interviews with such roast alums as Don Rickles, Rich Little, and the “now bigger than she ever was” Betty White are fun."

For those of us with only a little bread to spare, this appears to be where many pallies will start in their acquisition of Dino-roasts.  For those with deeper pockets, sure they are waitin' for the complete set that is bein' released in October.  ilovedinomartin salutes the pallies at "Blogcritics" and in particular Mr. John Reed for givin' some coverage of this new release of Dino-treasure a la roasts.  To checks this out in it's original format, simply clicks on the tag of this here Dino-gram.  Dino-reportin', DMP 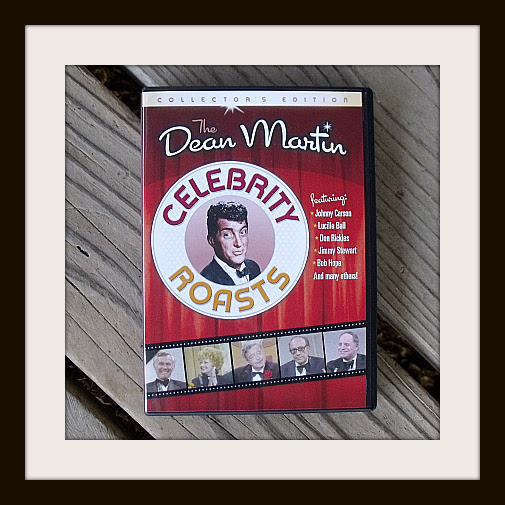 Dean Martin’s career is legendary: singer, movie star, TV variety show host. He built on that fame and brought a new brand of comedy to television with the debut of his Celebrity Roasts which ran from 1973 to 1984. Based on the famous New York Friars’ Club Roasts that Martin had occasionally hosted, the made for some of the funniest moments of ’70s and ’80s TV.
This new DVD collection, The Dean Martin Celebrity Roasts, contains six DVDs, and includes 12 of the series best. Sadly, most of the celebrities who were roasted and did the roasting are no longer with us. While some of the jokes are dated and may not be absorbed by those born after 1975, most of the shows are still very humorous and certainly are superior to some of the Comedy Central’s roasts.
Of all the Martin roasts, one of the standouts is the Johnny Carson special. He was used to getting grief from his many guests on Tonight Show (his being able to take the joke, while giving a great facial reaction to make it even funnier, was unparalleled). Impressionist/comedian Rich Little’s imitation of Carson is the best moment of the night.
Jack Benny also made for a great roast. He was was a big influence on Carson, and was also, and made quite a career out of (slyly) being the butt of joke. Sure the joke was always on him, but the next day everyone said “how funny the Jack Benny show was,” and not the one who delivered the put down.
What are a real treat on the set are the bonus features. Rarely seen home movies of Martin are great, while interviews with such roast alums as Don Rickles, Rich Little, and the “now bigger than she ever was” Betty White are fun.
The only thing that would have made the DVD set perfect would have been the inclusion of the Frank Sinatra Roast from 1978. Not only was it one of the best roasts ever, but seeing Sinatra take abuse all night, while keeping his cool was just priceless (and not something the Chairman of the Board was used to doing).
Martin was brilliant portraying a semi-soused host (rumors persist that he was a teetotaler during the roasts and the drunkenness was just an act), and could take the ribbing as much as he could give them. His likability factor made the shows a success, as you could not be offended one he gave you that charming grin, after the biting remark that is.
This collection is a great piece of TV history.