Hey pallies, likes whata coulda be better then a Dino-double header from our pallie of pallies Scotty over at his boun-t-fully beau-ti-ful blog "BlueisKewl?"  Nothin' we dare say!!!!!  Likes just a few moments 'go we posted the neatest of neat news that our deeply-devoted-to-Dino pallie Scotty had made the google 'lert Dino-search list for the first time that we knows of, and now while checkin' our any possible new Dino-postin' from Scotty at his blog, we came  'cross this perfectly powerfully potent post from our Dino-bro of our most beloved Dino captured by LIFE mag as the 'Olympic Diver."

Likes we have shared this perfect pose once before here at ilovedinomartin, and if memory serves us correctly it got more hits when it first appeared then any other Dino-postin'  Let's hope that Scotty's Sharin' gets even more dudes!  We are deeply touched that as you will read below, our bestest of best pallie has chosen to dedicate this particular post to our Danny G. and we.  Thanks ever so much Scotty for your finest of fine friendship in Dino as well dude!

We specially salute our ever-growin-in-Dino pallie Scotty on this delightful Dino-find and wishes him our best in all of his efforts, 'specially those in the cause of our Dino.  What the world needs is more more kind and generous pallies likes Scotty who makes our efforts here at ilovedinomartin so so worthwhile.  To checks this Dino-treasure out at Scotty's site, simply clicks on the tag of this here Dino-gram.  Doubly Dino-delighted, DMP 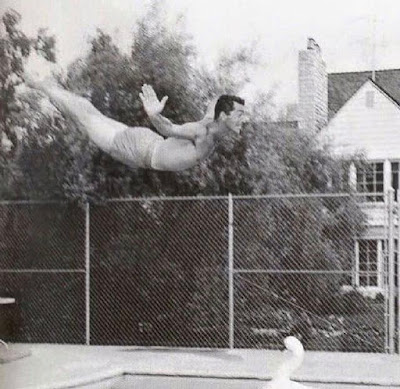 (I have to dedicate this DM posting to two very good friends of mine, DMP and Danny G. I greatly appreciate there support and friendship, the very best to you both!)

One of the most popular and enduring American entertainers of the mid-20th century, Martin was nicknamed the "King of Cool" for his seemingly effortless charisma and self-assurance. He and Jerry Lewis were partners in the immensely popular comedy team "Martin and Lewis". He was a member of the "Rat Pack" and a star in concert stage/nightclubs, recordings, motion pictures, and television. He was the host of the television variety program The Dean Martin Show (1965–1974) and The Dean Martin Celebrity Roast (1974–1985).

Martin, a heavy smoker, was diagnosed with lung cancer at Cedars Sinai Medical Center in September 1993, and in early 1995 retired from public life. He died of acute respiratory failure resulting from emphysema at his Beverly Hills home on December 25, 1995, Christmas Day at age 78. The lights of the Las Vegas Strip were dimmed in his honor. Martin is interred at the Westwood Village Memorial Park Cemetery in Los Angeles. His crypt features the epitaph "Everybody Loves Somebody Sometime", the name of his signature song.

Hey pal, Scotty...you left me speechless, man! Great pic of our guy Dean & GREATLY appreciates the dedication to DMP & myself! You DEF I NATE LY bring some extra coolness to the blog my friend! Grazie!

I'll bet that our Dino learned to dive like that by diving from the Steubenville-Weirton cliffs lining the Ohio River.

I recently came across this DM picture and did a double take and smile, if i did not know any better i would think Dean was an olympic swimmer as well as a first class entertainer. I look forward to the next DM discovery!

Thank you DMP and Danny G. as always for the kind words and support.

Have a great week everyone.

Hey pallie, likes Scotty-o, youse are the one deservin' of our deepest of deep Dino-appreciato....doin' your potent part gettin' the marvelous message of Dino-coll spread far and wide....bringin' many many to a deeper knowledge of our one and only Dino! Keeps lovin', and as youse are able keeps sharin' our main man!