"Kiss Me, Stupid" by Billy Wilder with Dean Martin and Kim Novak. 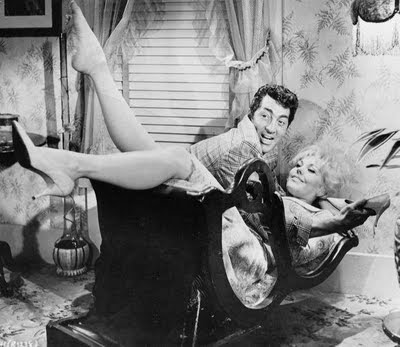 Hey pallies, likes on this fourth day of Dino-amore month we wanna shares a post that supremely shows that Dino-amore is ultimately universal in Dino-scope.  Today we takes all youse Dino-philes to the blog of  "TV2000 -  CHANNEL 28 , SKY CHANNEL 140 , TivùSat 18" which is announcin' the small screen broadcast  of our Dino's classic sex farce "Kiss Me Stupid" on Friday, February 5 at 21 hours 10 minutes....or as we would commonly state it in the USA, 9:10 p.m.

Likes the announcement is scribed in Italian, so we would take it that TV2000 is Italiano in origin.
"Kiss Me Stupid," as we have shared so so many times here at ilovedinomartin is our most beloved Dino's most controversial big screen effort, mostly showin' that our Dino was always a man ahead of this times.  By today's standards, the  film would be considered totally tame, but in 1964 it broke many a rule 'bout what was considered appropriate.

In this month of Dino-amore, it is great to see this classic Dino-tale bein' shown in the land of our Dino's origins.  While our Dino did many many flicks that are totally totally 'bout amore....many sex farces included, "Kiss Me Stupid" raised an uproar as well as the bar as to how amore coulda be expressed on the silver screen.

We salute our Italiano pallies at TV2000 for bringin' "Kiss Me Stupid" to the masses, 'specially in this month of absolute total Dino-amore!  To checks this out in it's original source, simply clicks on the tag of this here Dino-gram.  And, likes for those of us who woulda digs to view our Dino playin' his oh so cool, hip, and randy self, but we ain't got access to TV2000, through the magical mystery of youtube, below we share the full film of "Kiss Me Stupid" in all it's Dino-glory!   Always, ever, and only Dino, DMP

It 'a 1964 film directed by Billy Wilder. Funny, hilarious and enjoyable to revisit says Orville J. Spooner, a professional pianist, campa in a small town in Nevada, giving piano lessons at home, playing at weddings and funerals and making the organist for the local parish. Also composed songs together to "wordsmith" Barney, the only petrol station and mechanic for cars in the country, which regularly sends the songs composed with Orville at all the major music publishing companies in the United States of America, but does not have answer.

Posted by dino martin peters at 7:15 AM

A Dino-flik truly ahead of its time! Fun Fun Dino-filmin'!

Hey pallie, likes Danny-o, it likes our Dino playin' his Dino-best of himself---a precursor to the quartet of Helmer spyster Dino-flicks! Keeps lovin', keeps sharin' our most beloved Dino!