Hey pallies, likes time marches on as we continue our journey to Dino-winter-day and like we gotta tells you dudes that we have been thrilled to hear Dino-seasonal croonin' in the marketplace the last couple of days....indeed no one sing Winter likes our Dino and we can't tell how pleased we are everytime our most beloved Dino pops up playin' in a local shop or on the streets of our downtown.

The last three Dino-winter-tunes we have heard have all been hearin' Dino makin' such fun with have all been  "Rudolph the Red-Nosed Reindeer."   Likes hearin' our great great man havin' such a blast with this classic simply brings the biggest Dino-buddha grin to our face knowin' that more and more pallies will be drawn into the Dino-fold this season as they fall head-over-heels for our King of Cool's playful patterin' 'bout santa's main reindeer!

So, it is with likes great pleasure that we share a real gem of Dino-devotion for an ol' pallie of ours, Mr. Anton  Garcia-Fernandez at his swingin' blog, "The Vintage Bandstand."  We first presented a great post by Garcia-Fernandez back in the summer of '10 that accented that great great Dino-al-b-um, "Dream With Dean." and today Anton has favored his readership with likes a simply outstandin' Dino-post on the greatest of the great Dino-winter-al-b-um...."A Winter Romance."

Anton scribes with such such profound passion his adulation for this hot hot collection of the coolest of cool Dino-winter croons.  I coulda goes on and on 'bout this swingin' prose on our swingin' Dino...but, likes don't wanna makes you waits any longer to indulge in our pallie Anton's remarkable reflections on this wonderful
collection that is a mere 54 years old....remindin' all us Dino-philes that our most beloved Dino is truly truly timeless!

ilovedinomartin salutes Mr. Anto Garcia-Fernandez who 'gain so powerfully sharin' his passion for our Dino with his readership at his amazin' blog, "The Vintage Bandstand" and helpin 'em grow deeper and deeper in their devotion to our Dino.  To checks this out in it's original format, simply clicks on the tag of this here Dino-gram.  Dino-always, ever, and only, DMP 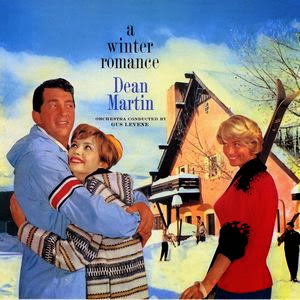 The holiday season is upon us again, and if last year we published an article on the Christmas recordings of Bing Crosby, Frank Sinatra, and Dick Haymes, three voices that are essential when it comes to providing melodies for this "most wonderful time of the year," we are now beginning a new series of posts that will hopefully become a Vintage Bandstand tradition. Entitled Bandstand Christmas Essentials, these brief reviews of holiday albums will only be published every month of December. And the first installment spotlights one of my favorite seasonal albums—Dean Martin's A Winter Romance.

Although Dean Martin recorded several Christmas songs throughout his long and successful career (as evidenced by the many anthologies of that type of material currently on the market), as well as a fine full-fledged holiday album for Reprise in 1966, it is his seasonal offering, A Winter Romance, that I would like to spotlight this year. And this is, indeed, a "seasonal" LP in the full sense of the word, for as its very title suggests, this 1959 Capitol gem is a collection of winter-themed tunes that inevitably includes a few Christmas songs, although Martin wisely stays away from traditional carols, which would not have suited the general atmosphere of the disc. Just looking briefly at the cover, it seems rather obvious that it was never anyone's intention to create a Christmas album here. The setting is a mountain ski resort, with lots of snow, a stylish cabin in the background, and people getting ready to go skiing down some slope, and everything has a definite Rockwellian feeling. But on the far left Dino is reluctantly hugging a very willing girlfriend while looking at another woman on the far right who is also suggestively smiling back at him. Not much to indicate Christmas here, unless it is that the character portrayed by Dino hopes to get to be someone's Santa sometime soon... 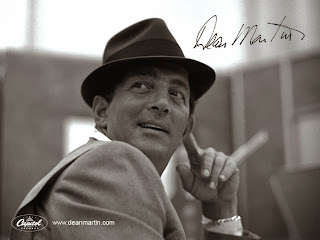 But as classic Dean Martin as the cover is (it somehow has always reminded me of the one from Pretty Baby, another one of his Capitol outings), we should not get too caught up in it, since the music is the important thing here. The album is bookended by two special-material tunes from the pen of Sammy Cahn and Ken Lane, the one that opens and lends its title to the LP and "It Won't Cool Off,"placed as the closing track. The former is the most interesting, a beautiful melody with a lyric that appropriately sets the scene for the rest of the selections but that is somewhat misleading regarding the organization of the album. While "A Winter Romance" introduces the theme of a love story that begins during the winter, the album does not explore such a story, which is just an excuse to string together songs about snow, cold weather, winter wonderlands, and, as already noted, the holiday season.

In between the two Cahn-Lane compositions, we find some fast-paced tracks about the joys of love during the cold season ("Winter Wonderland," "Let It Snow! Let It Snow! Let It Snow!" and "I've Got My Love to Keep Me Warm"), as well as some beautiful ballads like the pensive"The Things We Did Last Summer" (which Frank Sinatra had recorded superbly for Columbia in the 1940s) and the Bing Crosby evergreen "June in January." Two standouts from the album are Dino's lovely mid-tempo reading of "Canadian Sunset" and the often overlooked "Out in the Cold Again," an older song also cut by Johnnie Ray around the same time and handled by Dean with gusto and ease here. "Baby, It's Cold Outside" is undeniably the perfect vehicle for Dino's charming, happy-go-lucky persona, and instead of doing it as a duet with another singer, as is usually the case, he chooses to sing it with a female chorus, which does not work badly either. The two selections most commonly associated with the holiday season are "Rudolph the Red-Nosed Reindeer," complete with Martin's ad-libbed impersonation of Santa Claus speaking with what sounds like a fake German accent and an enjoyable rendition of "White Christmas" that never strays too far away from Crosby's classic Decca recording. The orchestra and chorus are directed by the lesser-known Gus Levene, and the arrangements are always tasteful and never get in the way of Martin's singing. Finally, the CD reissue adds a bonus track to the twelve on the 1959 LP, "The Christmas Blues," another song written by Cahn but recorded six years earlier which perfectly fits the theme and mood of the album and is most welcome. The original liner notes conclude that "the music, combined with Dean's vocal artistry, succeeds in producing just the kind of lover's glow to stir everyone to humming, dancing, and romancing—whether it's hot or cold outside," and even though Dino recorded more straight-ahead Christmas offerings that are also worth owning, A Winter Romance is an album that never stops spinning on my record player every year come December.

Posted by dino martin peters at 7:42 AM

So so TRUE! DEF I NATE LY my FAV Winter al b um as well!

Hey pallie, likes Danny-o and likes did I see that you just might be featurin' the title Dino-croon for this Sunday's Serenade with Dino?
Likes how cool is that man...truly Dino-magical! Keeps lovin' our most beloved Dino!

Hey pallie, likes Danny-o youse knows that I will stay tuned o'pallie of mine. Keeps lovin' our most beloved Dino!