And it WAS successful. To the point where it had not one but three sequels!

Hey pallies, likes some Dino-grams are huge in Dino-content, and some are quite small in Dino-thoughts, but likes each and everyone helps drive the Dino-revolution takin' place into higher and higher Dino-gear! Today's Dino-report is one of 'em that is fewer in Dino-words, but none the less worthy of Dino-note!

From the pen of a dude tagged "Booksteve" at his retro blog, "1966 My Favorite Year" comes homage to our Dino in the form of a brief report on Matt Helm caper numero uno, "The Silencers' that likes, of course, released in the swingin' year of 1966. Booksteve shares that hippest of hip Dino-al-b-um covers for his release of "Dean Martin The Silencers." As "Booksteve" notes this is not the soundtrack for "The Silencers," but a disc of Dino-croonin' inspired by the first of four Helmer spy flicks.

Of course, likes I totally totally digs that ultra-swank pix of our Dino makin' it with all those chicks on his Helmer round bed...and very cool of "Booksteve" to opine 'bout the success of the first Matt Helm film sayin, "And it WAS successful. To the point where it had not one but three sequels!"

ilovedinomartin shares our Dino-appreciato with Mr. "Booksteve" for puttin' the accent on our Dino and givin' his due rememberin' his coolest showin' of 1966..."The Silencers." It's pallies like "Booksteve" that are keepin' the accent on our Dino and makin' the Dino-light glow ever Dino-bright! To view this in it's original format, likes clicks on the tag of this Dino-message. Dino-always, DMP
Thursday, September 15, 2011 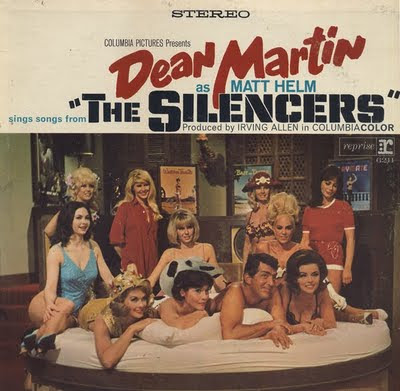 Not really the soundtrack of Dean Martin's first film as superspy Matt Helm, this is mainly an excuse to package a new collection of songs by Dean with a tie-in cover to take advantage of the film's success. And it WAS successful. To the point where it had not one but three sequels!
Posted by dino martin peters at 7:29 AM

I've got that album.

In fact, I have a very complete collection of our Dino's albums (vinyl). No surprise there!

To whom should I leave that collection in my will?

Hey pallie, how totally rad that you "have a very complete collection of our Dino's albums (vinyl)." I would hope that before you depart this earth you woulda find someone 'mong your family or friends that would treasure those Dino-discs as you do...perhaps even giftin' em to one of today's more youthful Dino-hipsters...helpin' 'em to grow leaps and bounds in their Dino-devotion...keeps lovin' our Dino!