Hey pallies, likes for all the amazin' Dino-posts that I am able to retrieve off the 'net, there are countless others that continue to go undiscovered 'til by the guidance of our Dino..they gets discovered. Such is today's post by blogger "Record digger" at the pad "47west63rd."

While searchin' for a pix of the al-b-um of our Dino's "Everybody Loves Somebody Sometime" for a recent Dino-post, likes I came 'cross this January 2009 post puttin' the accent on said al-b-um and the one that followed, "Dean Martin Hits Again." "

"Record digger" had come upon said discs "for the taking in front of a record store."
Said Dino-discovery lauched this pallie into a very devotionally written Dino-reflection of our most beloved Dino's recorded music career. "RD" has quite a cool knowlege of our the ins and outs of our Dino's recordin's..'specially the Reprise Years" and gotta say that it is just wonderful to read such stirrin' Dino-thoughts that are so so Dino-on-the-mark. "RD" is truly a Dino-holic and obviously proud of it.

Findin' this older bit of Dino-love will certainly urge me on to ever more Dino-diggin' on the world wide Dino-web! Much Dino-appreciato to "Record digger" for sharin' their Dino-admiration with the readers of "47west63rd" and now, the pallies here at ilovedinomartin. To view this in it's original format, likes just clicks on the tag of this Dino-report. Dino-searchin', DMP 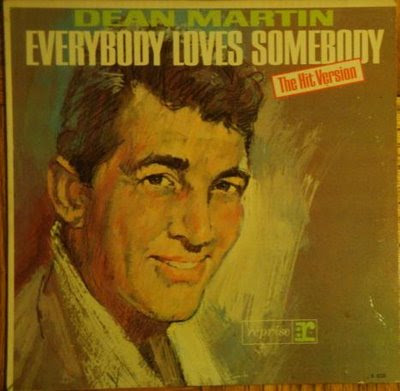 There's something about Dean Martin singing that I find very relaxing...I guess he didn't sweat the small stuff much... Anyways Dean Martin had recorded for Capitol Records and when Sinatra started his Reprise label he jumped ship like many other Sinatra friends (Sammy Davis, Nelson Riddle, Keely Smith, Rosemary Clooney,etc.).. From what I've read he also invested in the company.. Anyways, by 1964 the Rat Pack had probably lost a bit of its Kennedy Era glamour but Dean Martin still had a few tricks up his sleeve like the monster hit single "Everybody Loves Somebody" which in August 1964 took over the top spot on the pop charts from none other than the Beatles "Hard Day's Night"! Prior to this Dean had recorded a couple of great albums that had not sold particularly well although they sure sound great (proof they didn't sell much is the fact that you never find them in the bins while the stuff pictured here is a dime a dozen)... I'm thinking of albums that featured Dean singing country songs or french songs or of course italian songs.. ANyways by this point in 1964 I think Dean hadn't experienced much in the way of hits but that changed with Everybody Loves Somebody which was actually a re-recording of a song he'd originally cut for Capitol Records.. I suppose also that Jimmy Bowen the producer had something to do with developing a sound for Dean that worked on the charts.. After this hit single Dean recorded incredibly prolifically. He cut almost 20 records in the next five years! And you can tell listening to these albums just how relaxed, loose and comfortable these recording sessions were! Legend has it Dean would come in record a few songs and head to the golf course and the entire album would basically be completed in a weekend! Easy-going is what comes to mind when I think of Dean.. I've read many descriptions of him as the King of Cool but I tend to think of him more as easygoing... 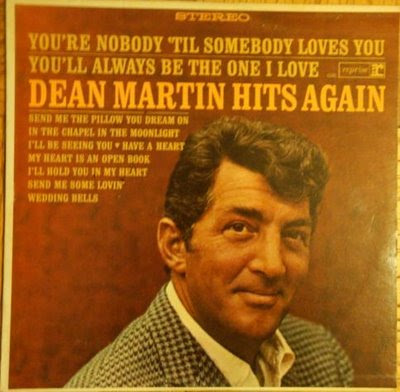 Shortly after he hit with Everybody Loves Somebody this album was released probably culled together from a few singles etc to capitalize on the situation (on Reprise R-6130) and it charted all the way at number 2 on the album chart... Then a few months later (following another release sandwiched in between and released November 1964) Dean Martin came back with "Dean Martin Hits Again" on Reprise 6146 which featured another hit in a very similar vein to "Everybody Loves Somebody", "You're Nobody 'Til Somebody Loves You", released February 1965 and which charted at number 13..I mean this was how quickly Dean was cutting albums! By this point producer Jimmy Bowen had found a formula for producing and framing Dean's voice working with Ernie Freeman as arranger/conductor..the formula is described by William Ruhlmann of the All Music Guide as "employing a 4/4 beat, piano triplets, female backup vocals, and swooping string effects to the songs."...Dean would release another three albums in 65 and another FIVE in 1966..Most critics nowadays tend to be fairly dismissive of the albums but to my ears they hold up.. They're not too ambitious and yes they are fairly similar but its a good formula for Dean Martin and helped him lengthen his career until the early 1970s no small feat for someone that had begun performing in the 1940s! I found these two LPs for the taking in front of a record store. Free/Free
Posted by Record digger at 9:13 PM
Posted by dino martin peters at 7:08 AM

Information about the sound developed for our Dino:

...the soft rock, country-pop musical style that arranger Ernie Freeman and producer Jimmy Bowen had developed for Dean Martin on the number one hit "Everybody Loves Somebody"...

More at the above link.

I do like the older version of "Everybody Loves Somebody," but that version couldn't compete in the music market of the mid-1960s.

Hey pallie, likes thanks ever so much Miss AOW for sharin' that link...very Dino-informative! Keeps lovin' our Dino!