"You get a history lesson after every show on their experiences with Dean," Edwards said. 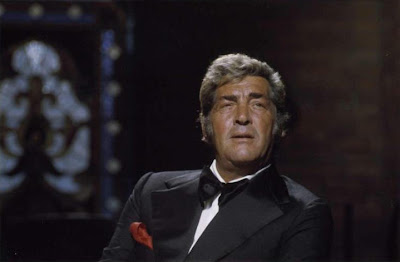 Hey pallies, likes as we are 'bout to begins the last quarter of our special special Dino-amore-month accent here at our humble little ilovedinomartin, we are 'gain totally totally thrilled to be able to share more cool from Dino-emulator Mr. Johnny Edwards.  Likes a few ago we shared a couple of Dino-grams with you 'bout his absolute awesome adulation for our most beloved Dino as he is performin' down under with  David de Costa and Nicholas Brooks as The Rat Pack.

Today we share 'nother intriquin' interview that Dino-holic  Johnny did for the Aussie press pad, "Wollondilly Advertiser."   Scribed by Miss Brittany Smith, we gotta 'fess up that we become more and more impressed with Edwards amazin' appreciato with each and every word we read 'bout his great great devotion to our great great man.

How cool is it that in all three interviews he has given, he shares new and different aspects of his efforts to emulate our most beloved Dino.  Instead of readin' over and over 'gain the same Dino-patter, Johnny comes up with more and more info on his unendin' efforts to more and more become likes our Dino.  Likes in the interview below, we learn that he has been able to perform for some of family Martin and in Johnny words, "You get a history lesson after every show on their experiences with Dean."

Likes pallie it is crystal clear that Mr. Johnny Edwards is simply not tryin' to make his daily bread by impersonatin' our King of Cool....he simply simply desires to be Dino....'though in a previous postin' he honestly admitted the true is that ....“You can never be 100 per cent Dean Martin.”  Likes how refreshin' to read Johnny openly on-goin' patter of his awesomely amazin' adultion of our one and only Dino.

ilovedinomartin gratefully salutes Mr. Johnny Edwards for all he is doin' to keep the life, times, and teachin's of our Dino alive and to Miss Brittany Smith and all the pallies at "Wollondilly Advertizer" for sharin' this interview with the wider Dino-world of devotees.  To checks this out in it's original format, simply clicks on the tag of this here Dino-report. Dino-always, only, and ever awed, DMP

FOR 20 years Johnny Edwards has been performing around the world, most famously with David de Costa and Nicholas Brooks as The Rat Pack.


See your ad here
This will be Edwards' third time bringing the charm of Dean Martin to Australian stages, having toured in 2010 and 2012.

"We're very excited about coming back to Australia," Edwards told the Advertiser.

"We jumped at the opportunity.

"Australia has great audiences; the show is well-received."

The Rat Pack will perform at The Cube, which they have previously played in.

"We had a great time there," he said.

"When you leave the US the audiences are so much more receptive. They treat you like the real guys."

Getting into the character of Dean Martin became easier for Edwards when he got the chance to perform for members of Dean Martin's family.

After seeing the concert in Las Vegas and Palm Springs they gained an appreciation for what Edwards was doing.

"You get a history lesson after every show on their experiences with Dean," Edwards said.

Edwards was attracted to the character of Dean Martin because of the similarities he saw with himself.

"I was the unofficial class clown growing up," he said.

"Dean didn't even have to say anything, he just put smiles on peoples faces because he had that childlike charm. He could tell the worst joke in the world and make it funny."

As the cousin of pop singer Cyndi Lauper, Edwards gained invaluable experience in the music industry from a young age.

He would wait for her backstage after a show and her crew would say "she's your biggest fan — she's always bragging about how talented you are".

Edwards said: "She always told me, 'Never be satisfied with where you're at because you can always be better'. She always made me feel special."

"People are going to have a great time and see a great show that will give them memories to last a lifetime," he said. "We encourage the audience to join in. We tell them, 'This is a party and you're all invited'."
Posted by dino martin peters at 7:05 AM