Hey pallies, likes our Dino was always always a man before his time, and thus to to often our Dino did not get the acclaim that he so richly deserved. Case in point woulda be his classic flick, "Kiss Me Stupid." When it was released in 1964 it was at least panned and often banned because of it's very adult themes.

Speakin' boldly of his appreciato for KMS, Boylan sez, "Much of the raunchiness still works, or perhaps works even better now, and Dean Martin and Felicia Farr are both excellent in their roles." How great to see more and more reviewers finally givin' our Dino and KMS their deserved due.

Thanks to our pallies at "Orlando Weekly" and particularly writer Mr. Rob Boylan for givin' the nod to our Dino in this outstandin' way...certain to draw many to viewin' "Kiss Me Stupid"...leadin' 'em closer and closer to deeper, purer, and truer Dino-devotion! To view this in it's original format, likes just clicks on the tag of this Dino-message. Dino-delightedly, DMP 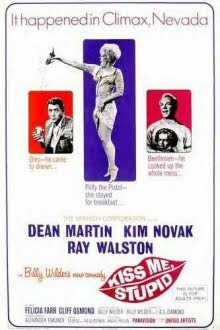 Out of Billy Wilder’s entire filmography, Kiss Me, Stupid is the one that really stuck in his craw. Lambasted by critics and censors alike for being too crude for its time, it was seemingly doomed from the get-go, when Jack Lemmon, fresh off of back-to-back-to-back hits with Wilder (Some Like it Hot, The Apartment and Irma La Douce) had to pass.

The film stars Dean Martin in a playful parody of himself as the charmingly drunk, eternally handsome nightclub singer and actor named, cleverly, Dino. He has just closed his run at the Sands in Las Vegas (treating us to a really wonderful rendition of ‘S Wonderful by the Gershwins, who also provide new songs to the production). Travelling to LA for an engagement, he is stopped in the podunk town of Climax, Nevada, where he is Shanghaied by two song writers, hoping that Dino will take on their compositions, Orville (Ray Walston) and Barney (Cliff Osmond). But it’s not songs that Dino is interested in, it’s girls. So like any normal fellas would, Orville and Barney hatch a plan to chase away Orville’s wife, Zelda (Felicia Farr), and hire a hooker with a heart of gold, Polly (Kim Novak), to seduce Dino so he’ll be more inclined to buy the songs.

It’s a plot that could easily play these days in a black sex comedy, but for 1964 was too risque for mass audiences, even as the Hays Production Code was slowly fading into obscurity. Such blatant, open adultery was still a tough sell, even though it worked like gangbusters in The Apartment. But it was a softer form of adultery in The Apartment, where the adulterer, CC Baxter’s boss Shelldrake, was the film’s heavy, not the film’s hero, a small-town piano teacher like Orville.

Orville, too, was a problem. It is a lead role that was so clearly written for and tailored to Lemmon’s personality and sense of style that it was almost unfair to expect anything but a long reach from Ray Walston. Walson, to his credit, is amiable in the role as the slightly dense but skilled composed and tries hard to hit the story’s finer notes, but he just doesn’t fit the bill. The film is intended to be raunchy in a really lovable way — almost a New York apartment film, like an Odd Couple or a Two for the See Saw, but with a little more “gee, whiz” to it than savvy Greenwich Village intellectualism.

But outside of that, there is a lot to like here. Much of the raunchiness still works, or perhaps works even better now, and Dean Martin and Felicia Farr are both excellent in their roles. Martin’s parody of himself is second only to the long-running gag act of Tony Clifton, and Felicia Farr even steals the film a little bit in her short scenes after she’s run away from Orville.

Billy Wilder, along with his co-writers Charles Brackett and Izzy Diamond, had one of the best runs of any filmmaker in the history of film, and even though the wheels were coming off of the train by the time he got around to Kiss Me, Stupid, you can still see the Wilder of old at work. If Kiss Me, Stupid can be said to not work on the whole, you would at least have to admit that it works in pieces, and that some of those pieces are pretty great. There is a slightly absurd touch to the whole thing, especially the ending, but it’s no less absurd than the end of Sabrina or Some Like it Hot.

Isn’t that the worst trailer you’ve ever seen? No wonder no one went to see it.
Posted by dino martin peters at 7:10 AM