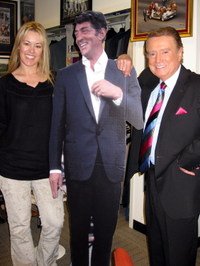 Hey pallies, likes we gotta 'fess up that we are behind the times in sharin' the sad news that one of the greatest devotees of our most beloved Dino has passed from this life.  A bit over a week 'go on July 24, the same day in Dino-history when our Dino and his partner Mr. Jerry Lewis shared their last performance together and then parted ways, television legend Mr. Regis Philbin died from heart disease at age 88 in  Greenwich, CT.

A number of times in the past we here at ilovedinomartin  have shared sweet stories of Mr. Philbin's absolute awe and lastin' love for our Dino and today and days followin' we will be offerin' Dino-grams honorin' Regis and his fabulous fascination with our one, our only Dino.  Likes today we begin by sharin' a vibrant video we found on youtube of Mr. Philbin  guestin' on"CBS This Morning and sharin' his touchin' and tender tale of the first time that hw saw Martin and Lewis in person at the Copa Club and how his life long awesome adulation of our Dino began.

All youse Dino-philes are goin' to deeply deeply dig hearin' Regis so openly and affirmatively speak of his fabulous fascination with our King of Cool and of  the incredible impact that our awesome amazin' almighty Dino had on Philbin's life and work.  Likes  our Dino-hearts are wonderfully warmed when we here Regis speak his absolute affection for our Dino..."He could sing.   He was funny.   He was handsome.   He was everything that I wanted to be."

We are totally totally thankful to the folks at CBS This Morning for puttin' this virile vid up on youtube and absolutely awestruck by Mr. Regis Philbin's  wonderfully wise words of potent praise of our one, our only Dino.

Regis Philbin speaks to the "CBS This Morning" co-hosts about the moment his fascination with Dean Martin began.
Posted by dino martin peters at 4:15 PM

Deeply saddens me every time we lose 'nother "ol' school" Dino-lover. 'Specially a class act like "The Rege". BTW, pal...the vid won't play. Says youse can view it on YouTube, though.

Hey pallie, likes Danny-o, sorry that you didn't figure out that all you had to do was click on Watch This Video On Youtube and would be transported to it there.