Dean Martin, the most likeable of performers, gets to play Dino, the evil twin version of his persona.

Hey pallies, likes today we gets to take 'nother look at what is considered our most beloved Dino's most controversial big screen effort, the 1964 Billy Wilder sex farce, "Kiss Me Stupid."  This latest review has been scribed by blogger Mr. Rick Gould, who hangs his reviewer hat at his self-tagged blog, "Rick's Real/Reel Life."

Likes, while Mr. Gould has nothin' negative to say 'bout our Dino, taggin' our main man as "the most likeable of performers," he is clearly not a fan of this Dino-flick, and makes this completely clear in his prose.  We gotta 'fess up that while we ain't in agreement with his sentiments are KMS, we do understand why he has the perspective that he does. Likes truthfully we are chosen to share Rick's remarks is not so much for his prose, but mucho more so 'cause of the powerfully potent pixs he has assembled to coolly compliment his written words.

The first image of the party on the set of KMS,   is new to us, and we never ever tire of seein' 'n sharin' the other Dino-images included, 'specially the one of our Dino and Miss Farr in the shower.
We thanks Mr. Rick Gould for his candid comments on "Kiss Me Stupid" and for the swank selection of Dino-poses he has included in his work.  To checks this out in it's original source, likes simply clicks on the tag of these Dino-thoughts. 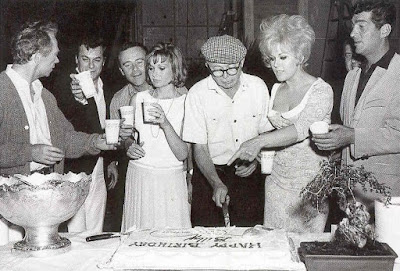 After Peter Sellers left due to multiple heart attacks, filming of 'Kiss Me, Stupid' was a cakewalk for Billy Wilder. Visiting the set are 'Some Like It Hot' stars Tony Curtis and Jack Lemmon.

Billy Wilder is one of my favorite filmmakers, who has directed some of my all-time favorite movies: Sunset Boulevard, Sabrina, Some Like It Hot, and The Apartment. Wilder’s adult, smart, uncompromising, yet witty storytelling paved the way for modern moviemakers. Imagine my surprise when I finally watched the director-screenwriter’s sex comedy Kiss Me, Stupid, starring Dean Martin, Kim Novak, and Ray Walston.

Kiss Me, Stupid was a notorious 1964 flop that in retrospect was the kiss-off to Billy Wilder’s career as Hollywood’s hottest comedic director. Like Hitchcock’s Marnie that same year, or Joseph Mankiewicz’ Cleopatra the year prior, or George Stevens’ The Greatest Story Ever Told in ‘65, Billy Wilder joined this elite club with Kiss Me, Stupid. They were all long-time, big-name directors whose stellar reputations were never the same because of one film.

After a string of hits, right up through Some Like It Hot, The Apartment, and Irma LaDouce, Wilder was renowned for sexy comedies with stinging social satire, wit, and intelligence. These qualities vanished with his next project, Kiss Me, Stupid. The premise is about Orville Spooner and Barney—two would-be songwriters struggling in Climax, Nevada—everybody and every place in this movie have a cartoon name. When Dino, a lecherous and drunken crooner played by—surprise!—Dean Martin, is stranded en route from Vegas, the dim duo envision stardom. 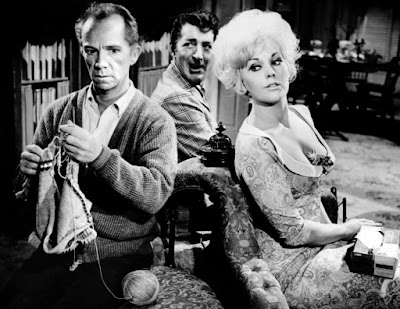 Dino doesn’t want to hear their pitch, and complains of needing “action” every day—to prevent headaches. Pervy Barney prevails on Orville to pimp his wife, Zelda, out in exchange for the crooner’s pop music consideration. Did I mention Orville is so jealous of his wife, he comes off like a comedic Othello? Married man Orville balks, so Barney prevails on a local cocktail waitress/hooker, Polly the Pistol, to pose as Orville’s wife and do the dirty deed. After provoking a fight with the little woman to get her out of the house—on their anniversary—the wife decides to celebrate solo at The Belly Button, the sleazy bar where Polly plies her trade. The married man, with the floozy’s help, wines and dines the crooner. All goes awry when the jealous Orville gets possessive over the spurious spouse and kicks Dino out. The hubby and the whore spend the night together in mock marital bliss. 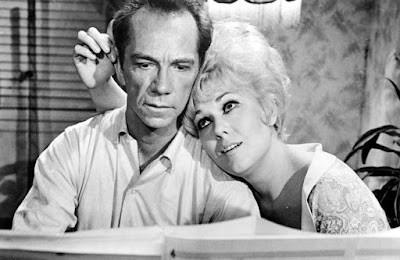 The songwriter hubby and the "wife"/whore enjoy some faux-marital bliss.

The crooner ends up at The Belly Button, where Zelda has been drowning her sorrows. The wife is now passed out in Polly’s trailer next door. Guess who pays her a visit, thinking she’s the local whore? Dino listens to Zelda’s pillow talk, praising her hubby’s tunes. She in turn puts out for the crooner. Zelda passes on Dino’s payment to Polly, so she can move on, post-Climax. Orville and Zelda are reunited, Dino sings his song, and Spooner’s jealousy is finally over. Zelda gets the last word, the movie’s title. Everyone say awww. 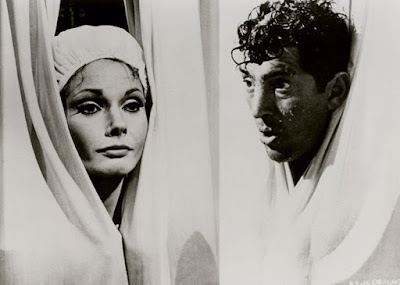 And the real wife gets to play whore for a night with celebrity customer Dino!

Awww as in awful, that is. Typically, I go light on film plot recaps, but it’s one of this movie’s major flaws. The storyline of Kiss Me, Stupid is so one-dimensionally sleazy that it’s like 126 minutes of Playboy cartoons strung together. Billy Wilder frequently walked the tightrope of taste with risqué plot points in The Seven Year Itch, Some Like It Hot, and The Apartment. What elevated these classics were smart dialogue, empathetic characters, and appealing performances by their stars. Kiss Me, Stupid has none of these qualities. What’s really amazing for a Wilder movie is there’s not a single memorable line of dialogue, just a string of low-brow one-liners. 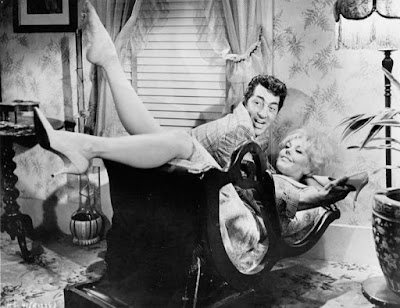 Dino as a most disruptive dinner guest. Kim as the "wife" doesn't seem to mind.

I will give Billy Wilder this: the opening and closing scenes of Kiss Me, Stupid show off his storytelling style admirably. And Wilder and his long-time screenwriter, I.A.L. Diamond, tell the story with great clarity—everything is nimbly wrapped up by Stupid’s final scene. Too bad the story and dialogue in between are so low-brow. There are stretches in Kiss Me, Stupid that are endless, the worst is when Orville and his “wife” are entertaining Dino. 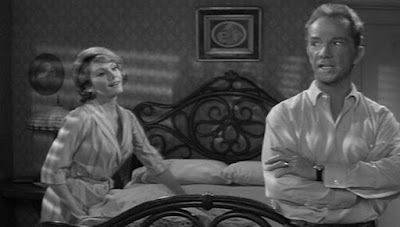 Felicia Farr as the patient wife, Ray Walston as the insanely jealous husband.

This film was blasted by critics, censors, and the Catholic Church when it was released during the Christmas holidays, 1964. After the plot described above, is it any wonder? The Hollywood era was near the end of compromising with censors. Still, during the first half of the ‘60s, mainstream movies came on as provocative, but often ended up pussy-footing around. Wilder deserves credit for not being a tease, I suppose. While the targets of the director’s derision are admirable—moral hypocrisy, greed, and celebrity worship—the humor is about on par with a crass celebrity roast. The intelligent wit of Wilder is woefully lacking. The other big liability is the stars of Stupid. Wilder always worked with stars of great comedic flair and charisma—Shirley MacLaine, Audrey Hepburn, Walter Matthau, etc. In a film that desperately needs Wilder favorites Jack Lemmon and Marilyn Monroe as the jealous married man and the hooker with the heart of gold, we get Ray Walston and Kim Novak. Walston as Orville Spooner is grating, performed by a one-note Hollywood ham who fared better as a sitcom Martian. At 50, Walston was neither attractive nor appealing enough to believably attract gorgeous Felicia Farr or Kim Novak. But hey, we still have sitcoms starring homely comedians and their hot wives! Jack Lemmon was not available for this lemon, so Peter Sellers was originally cast as Orville, but suffered a series of heart attacks and dropped out. 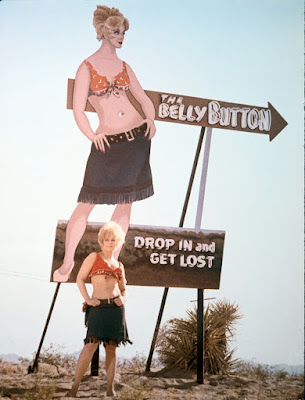 Kim Novak as Polly the Pistol, who works at bar called
The Belly Button, in a town named Climax. Hilarious, right?

Marilyn Monroe was the original choice for Polly the Pistol, but famously expired before pre-production. So Kim Novak made her first film in two years as Polly. In her heyday, Novak was routinely panned as the most plastic kind of studio-manufactured star. In recent years, some film historians/writers now see nuances in Novak’s performances. To me, Kim certainly possessed vulnerability, which, when cast in complementary roles like Vertigo, was very effective. Yet Kim Novak’s limited range and lack of genuine charisma only makes me appreciate how Marilyn Monroe made sexy comedies seem effortless. Novak’s New Jersey accent makes her unfunny punch lines seem even flatter. And who thought it would be hilarious to have Novak play Polly as suffering from a stuffed up head cold? Kim sounds like a female Tony Curtis here. 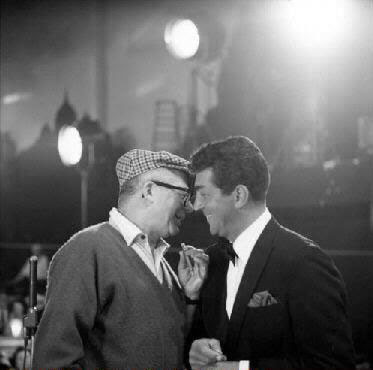 Dean Martin, the most likeable of performers, gets to play Dino, the evil twin version of his persona. Martin’s brutal self-parody seems more foolhardy than brave, and only solidified his increasingly rancid Rat Pack image. Billy Wilder raved about Dean Martin’s untapped talent…but cast him as a dirty joke version of himself?

The great supporting cast is wasted as sitcom stereotypes. The worst is Cliff Osmond as Barney, the songwriting pal who concocts the whole sleazy scheme. Osmond is not just over the top, but totally repellent, looking and acting like Charles Laughton in slobbering villain mode. Osmond and Walston, as the untalented songwriters, are so frenetically unfunny together that I kept wishing somebody would magically give them the Bugs Bunny cartoon-style hook. 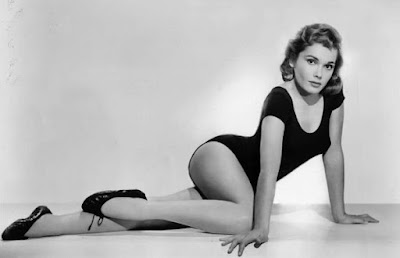 Felicia Farr is a lone bright spot as the sexy, sensible wife in 'Kiss Me, Stupid.'

The sole saving grace of Kiss Me, Stupid is Felicia Farr as Zelda Spooner, the Orville’s wife. Farr is lovely, sexy, smart, fun, and real—everything this film is not. The charming actress must have decided that starring as Jack Lemmon’s wife in real life was better than appearing in movies like this, because she acted only occasionally thereafter.


There’s a wave of current day film theory that defends Wilder as breaking barriers with his unvarnished, tough take on middle-class morals in Kiss Me, Stupid. Unfortunately, Billy Wilder presented the material in such a puerile, obvious manner that it comes across as trying to have your cake and eat it, too. And over 50 years later, Kiss Me, Stupid is still one stale slice of comedy.

We don't blame you for hiding, Felicia!

Fun read, pal! I also disagree with Ricks review but...whatever. I guess Dino-beauty is in the eye of the Dino-beholder. Haha!! KMS always was & always will be one of my personal Dino-faves!