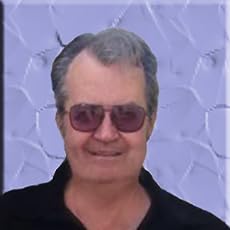 Hey pallies, likes welcome back for yet 'nother wonderful week of liftin' up the life, times, and teachin's of our most beloved Dino here at our humble little ilovedinomartin waterin' hole.
Today we are once 'gain totally totally thrilled to share more Dino-adulation of the international source as we hear from historian Alan Royle at his powerful pad, "Historical Move Info, Movie Trivia, Fascinating  Hollywood Facts."

Mr. Royle hails from Fremantle, Western Australia where he was born and has now returned to upon his retirement.  Alan has swankly scribed a noteworthy number of valiant  volumes and if you click on the tag of this Dino-gram and then click on the tab "My Books" you came view them.  Let it be sweetly stated that Royle's credentials are top shelf!

Likes today we deeply delighted to share Alan's supreme salute to our one and only Dino,  "DEAN MARTIN – Mr. Nice Guy."   As all youse Dino-philes will see below, it is an incredible intro  to our Dino with potent pixs and perfectly powerful prose.   Royle hits many of the Dino-highs includin' his partnership with Mr. Jerry Lewis; a nod to our Dino's boypallie, his beloved Dino Martin, Jr.; his friendships with Mr. Frank Sinatra and Miss Marilyn Monroe; our Dino's fame and fortune on both t he big and small screen.

We shout out our absolute appreciato to Mr. Alan Royle for helpin' his remarkable readership
be drawn to growin' deeper and deeper in our most most most beloved Dino.

btw, we're wonderin' how many of youse Dino-holics can point out the one error that Royle has made in his salute to the Matt Helm flicks?!?!?!?


Dino Crocetti was an Italian from Steubenville, Ohio, and Joseph Levitch was a Jewish boy from Newark, New Jersey, and nearly nine years his junior. From the moment they joined up in 1946 to form the comedy duo of Martin & Lewis they were a hit. Within three years they were in the movies; My Friend Irma (1949) and At War With the Army (1950) being their first, and on their way to screen superstardom. Together they were a terrific combination, Dean the straight man, good looking and possessed of a smooth, romantic singing voice, and Jerry the goofball comic, outrageous, physical and very funny. Together they would make 16 movies in eleven years, some hilarious, some much less so, but their vastly diverse personalities would ultimately drive them apart. And the biggest difference between the two men was apparent for all their acquaintances to see – ambition. Dean had scarcely any and Jerry had enough for twenty men.

the early days on radio
Almost from the very beginning it was Jerry who handled business. Dean wasn’t interested. When people came to him with a proposition, regardless of how lucrative it might appear, Dean’s standard response was, ‘Talk to the Jew.’ So they did. From 1949-53 the duo enjoyed weekly acclaim on NBC Radio with their own show, and it was Jerry who set up the 1950-55 Martin & Lewis Show on the Colgate Comedy Hour on US television when the medium was just finding its legs. A decade later (in 1965) Dean (alone) would commence a 19 year TV career with his own show that was enormously popular world-wide. 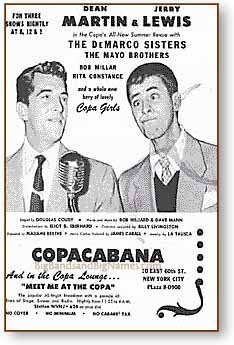 Headlining at the Copa
In his youth Dean boxed under his real name (36 fights, 25 wins). In other words he was OK, but that’s all, and he knew it. He told friends that he used to fight under the name of ‘Kid Crochet’, but there is no record of that, so it was probably just Dean poking fun at himself. He also delivered bootleg liquor, and ran numbers and crap games for hoodlums whenever he needed money. It was mobster Frank Costello who booked Dean and Jerry at his Copacabana Night Club in 1948, the night Sinatra saw their act for the first time. ‘The Dago’s lousy, but the little Jew is great,’ were Frank’s first impressions. Indeed, most of the duo’s early engagements were at mob joints. Jerry was initially unaware of this, but Dean knew most of these guys from the old days. Even when they moved from the east coast to California, they did so with financial backing from gangster Mickey Cohen. Dean’s son, Dean Paul Martin, revealed how his father nearly always had apple juice in his ‘booze’ glass when performing on stage with the ‘Rat Pack’ in Vegas, or on his highly successful television show, stating that his father could never have performed had he drank the liquor he seemed to be drinking. Known to his pals as Dino, Dean Junior formed a pop band called Dino, Desi & Billy that enjoyed some chart success in the sixties. Later, he  was briefly married to world figure skating champion Dorothy Hamill, but it ended in 1984. Tragically, Dino would die at just 35 when he flew his Phantom F-4 jet fighter into the San Bernardino Mountains during a snowstorm while serving in the National Guard in 1987. His devastated father never got over his death.
Dean & Frank
Dean and Frank Sinatra were close friends, despite Frank being something of a party animal and Dean, more often than not, happy to relax in his hotel suite with a few comic books or watching his favorite westerns. He also needed early nights so that he would be fresh and fit to pursue his passion – golf – next morning. Friends genuinely liked Dean’s easy-going good nature, his willingness to enjoy a good laugh and, above all, his naturally hilarious sense of humor. It was generally agreed by those who knew both Martin and Lewis that off-screen Dean was by far the funnier of the two, something that was not lost on Jerry for a moment. Jerry was far more serious, all business, business, business, and not much fun to be around. He also had a monumental ego that needed to be fed. The two men were bound to clash – and they did so, many times. A lot of people think they became life-long enemies following their break-up, but that is not quite so. They reunited a few times over the years, usually via the efforts of their pals, and eventually got back on friendly terms towards the end of Dean’s life. with Marilyn
One of Dean’s many likeable qualities was his loyalty to friends. This was never more evident than when 20th Century Fox decided to fire his pal Marilyn Monroe from their movie Something’s Got To Give in 1962, and replace her with Lee Remick. He reminded the studio that he had contractual approval of his co-star, and he would only continue with the picture if Marilyn was reinstated. She was. Sadly, she died before it could be completed. Despite this genuine display of support for Marilyn, Dean and all the Rat Pack members were banned from her funeral by her ex-husband Joe DiMaggio, presumably because he blamed them all (in varying degrees) for being responsible for introducing her to the Kennedys whom he blamed for her death. DiMaggio at Marilyn’s funeral
In the sixties Dean played H.A.R.M. Agent Matt Helm in three spy spoofs called The Silencers, Murderer’s Row (both in 1966) and The Wrecking Crew (1968). Dean’s co-star in the third of these was the ill-fated beauty Sharon Tate. There was supposed to be a fourth in the popular series, to be called The Ravagers, but it was never made. Dean was so distraught over Sharon’s brutal murder at the hands of the Manson Gang in 1969, he refused to ever play Matt Helm again.

Sharon and Dean in The Wrecking Crew
Dean’s recording career was stellar indeed. Overall he had around 40 hit singles, most of them with Capitol Records, until he signed with Sinatra’s label Reprise in 1962. Surprisingly, he only had three Number Ones in his career – That’s Amore (1953), Memories Are Made of This (1956), and Everybody Loves Somebody (1964). After his break-up with Jerry, Dean quickly secured a singing/stand-up comic engagement at the Sands in Las Vegas and was an immediate success. For the next thirty years he did two six-week stints a year there for an annual fee of $300,000. The workload suited his golf game to perfection. Similarly, in 1965, when he was offered $40,000 a week for a single day’s work on his own TV show, he just couldn’t say no. By 1967, such was the show’s popularity, his pay packet had escalated to $285,000 an episode, an extraordinary amount for the time. Oddly, as Dean went from success to success and seemed to get funnier and funnier. Jerry, on the other hand, tried everything to recapture the success they once had, but he could not do so. Dean probably summed him up as well as anyone when he said: ‘At some point he said to himself, ‘I’m extraordinary. Like Charles Chaplin’. From then on, nobody could tell him anything. He knew it all.’
Dean lost interest in living after the death of his boy in 1987, and would only live another eight years. Sitting alone in his private booth at his favorite bar, quietly drinking, he would listen to his albums playing quietly in the background. When asked what he was doing he would reply, ‘waiting to die.’ After declining major liver and kidney surgery to prolong his life, Dean Martin passed away on Christmas Day, 1995. He was 78. Three days later the city of Las Vegas turned off the lights on the Strip for one minute as a sign of respect for the popular entertainer. The only previous time this had happened was when Sammy Davis Junior died.