Hey pallies, likes as we continue our revelatory reflections on the incredibly important date in Dino-history, October 13, 1969....the day that our most beloved Dino was introduced to then Miss World-USA, Miss Gail Renshaw while entertainin' in his playground, 'Vegas baby 'Vegas, an evenin' that totally totally  transformed our Dino's life and times we once 'gain shares with all youse Dino-holics a profoundly powerful piece of Dino-devotion, we first shared on July 9, 2014, which was an ultra ubber update on Miss Renshaw that we first potently published   HERE.  We are perfectly proundly pleased to be able to share it 'gain, for those who may have missed it when first posted and to refresh all our Dino-philes memories of the role that Miss Renshaw played in the amazin' affairs of our Dino's heart.   Below is a reprint of what first appeared here on July 9 in the year of our Dino 2014. 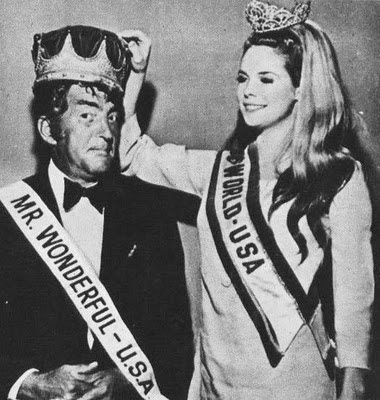 But after a few days of anguished phone calls, Renshaw told Martin face to face that she couldn’t go through with the marriage. “The age difference was a hindrance, and I felt bad missing my parents,” Renshaw said, noting that her father back in Arlington wouldn’t fly on airplanes.
Posted by dino martin peters at 2:30 PM