One of my guiltier pleasures is the “Matt Helm” films of the mid-60s.

Hey pallies, likes today we are potently pleased to bring yet 'nother intriguin' twist on our Dino as swingin' spyster Matt Helm from the pen of Mr. Jeff Costello who scribes at his blog tagged "Counter-Currents Publishing - Books Against Time."  Mr. Costello's post, "“The Flash in the Pan”: Fascism & Fascist Insignia in the Spy Spoofs of the 1960s."  Likes as you can tell by the title of his scribin's, Jeff is accentin more then just the Matt Helm capers and his emphasis is on Fascism and Fascist Insignias in big screen "spy spoofs."

Likes  Mr. Costello doesn't say a ton 'bout our Dino, but we are pleased as punch to read his revealin' reflection that we have used as the tag of this Dino-gram: "One of my guiltier pleasures is the “Matt Helm” films of the mid-60s."  The value of Jeff's efforts are to give a great background on how the Matt Helm flicks came to be made and a ton of thoughts on the baddies of Helm....B.I.G.O.

It's a fun read, and mostly we have included the first part of Costello's work that is Helmer centric....to read the post in it's entirety, simply clicks on the tag of this here Dino-message.   We salute Mr. Jeff Costello for his remarkable reflections of Helm with the most interestin' of twists and thank him for spreadin' his devotion to our Dino as Helm at his blog.


“The Flash in the Pan”: Fascism & Fascist Insignia in the Spy Spoofs of the 1960s 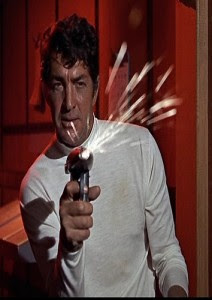 One of my guiltier pleasures is the “Matt Helm” films of the mid-60s. There were four of these, all produced by Irving Allen and starring Dean Martin as secret agent Matt Helm. The first (The Silencers) appeared in 1966. The story behind these films is an interesting one. In the 1950s Irving Allen was partnered with Albert R. (“Cubby”) Broccoli. Things came to an end, however, when Broccoli announced that he was interested in purchasing the film rights to the James Bond novels by Ian Fleming. Allen thought this a terrible idea, and according to legend told Fleming over lunch that he didn’t think his novels were good enough even for television (!). Broccoli and Allen went their separate ways, the former partnering with Harry Saltzman. Their first film together was 1962’s Dr. No, starring Sean Connery.

The result left Mr. Allen with a considerable amount of egg on his face. Not to be deterred – and apparently unburdened by neither a sense of irony nor of shame – he purchased the rights to Donald Hamilton’s series of Matt Helm spy novels. These books were actually the antithesis of Fleming’s: Helm was a cold-blooded, no-nonsense American assassin, a character as devoid of charm as Hamilton’s realistic plots were devoid of Bondian fantasy. Irving launched a phoney, “world-wide” search for an actor with the balls enough to play Helm – but in reality Dean Martin apparently had the part all along.

With a vocal style uncomfortably close to that of Bing Crosby, Martin had carefully cultivated the image of a boozy, lovable playboy. (In reality, he was by all accounts a serious, introverted man whose on-stage glasses of “whisky” were actually iced tea.) He was an odd choice for an American James Bond. But the Matt Helm films were consciously aimed at an unsophisticated, lower-middle-class American audience. The people who thought Bond was just a wee bit too toffee-nosed and foreign. The cinematic Matt Helm was Bond if Bond had been from Long Island. Helm was a boozing, womanizing wastrel. Incorrigibly lazy, he is depicted in two of the films as unable to get out of bed to answer a call from the head of I.C.E. (Intelligence Counter-Espionage). But somehow he is always the only man who can save the world. 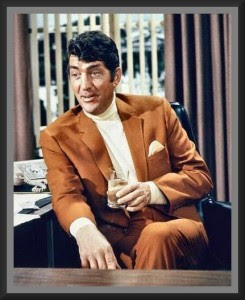 The Helm films borrow shamelessly from Bond but exaggerate all the Bondian elements. Instead of Maurice Binder’s tasteful nude silhouettes, the credits sequence of the first Helm film features a strip show (the title “The Silencers” appears over the boobs of one of the girls, when she flings off her top). Unlike the spiritually virile Bond, who attracts women by actually seeming to be rather indifferent to them, Helm is a leering, eye-popping adolescent sex maniac. Instead of an Aston Martin complete with lethal accessories, Helm drives a 1965 Mercury Parklane station wagon complete with a bar and a bed (convenient for roadside quickies).The Helm films also frequently push the limit in sexual innuendo and double entendres. (The poster for the first film features Martin astride the barrel of a huge gun, under the words “Matt Helm Shoots the Works!”) Perhaps the most amusing of these is the name of the evil organization Helm confronts in three of the four films: B.I.G.O.

Pronounced “Big Oh,” the letters stand for Bureau of International Government and Order. Evil organizations with acronyms for names were a staple of the Bond-inspired films and television shows of the 1960s. The granddaddy of all of these was Fleming’s S.P.E.C.T.R.E.: The Special Executive for Counter-Intelligence, Terrorism, Revenge, and Extortion. S.P.E.C.T.R.E. had been introduced in Fleming’s 1961 novel Thunderball, which he had actually based (without attribution) on a screenplay written with Kevin McClory and Jack Whittingham. S.P.E.C.T.R.E. was conceived by Messrs. Fleming, McClory, and Whittingham as a relatively small organization made up of the greatest criminal brains of the world. Headed by the sinister, asexual German-Greek Ernst Stavro Blofeld (Fleming’s villains were often foreign mongrels) the organization was apolitical, and aimed simply at making a profit – it is never depicted as motivated by any sort of political ideology. (For example, in Thunderball S.P.E.C.T.R.E. steals two nuclear bombs with the intention of extorting £100 million from the United States and Great Britain.) 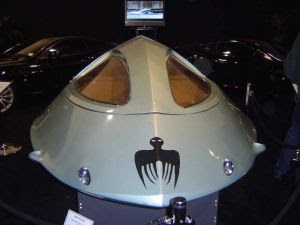 In the Bond films, which eventually came to completely eclipse the novels in the popular imagination, S.P.E.C.T.R.E. became a vast organization equipped with its own secret island (From Russia with Love), steel-lined Paris headquarters (Thunderball), and steel-framed rocket base concealed inside an inactive volcano (You Only Live Twice). Blofeld really loved steel. In For Your Eyes Only (1981), Bond disposes of a Blofeld-like character who begs for his life, promising to build Bond “a delicatessen in stainless steel” (I am not kidding – watch it and see for yourself). And in the films S.P.E.C.T.R.E. has its own insignia: a stylized octopus. 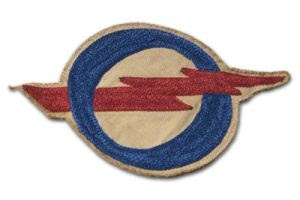 B.I.G.O. uniform patch from "The Silencers"

When S.P.E.C.T.R.E. became B.I.G.O. in the Matt Helm films, however, a curious thing happened. B.I.G.O. was not merely a vast criminal organization – it was a vast right-wing conspiracy. The aim of the Bureau of International Government and Order was world domination: the creation of one world, fascist-style government. And, of course, it had to have its own insignia, just like S.P.E.C.T.R.E., and this is where things get really interesting: B.I.G.O.’s emblem was a lightning bolt through a circle (an “O”), uncannily similar to the official symbol of Sir Oswald Mosley’s British Union of Fascists (even the color scheme is the same).

Derisively referred to by critics of the B.U.F. as “the flash in the pan” (I have to admit that this is witty), the “Flash and Circle” was adopted by the organization in the summer of 1935, replacing the fasces. It was supposed to represent “the flash of action within a circle of unity” and was designed by Eric Hamilton Percy, Commander of the Fascist Defence Force.[1] A similar insignia was adopted by the Canadian Union of Fascists (a lightning bolt over a maple leaf), and in 1948 Mosley revived the flash and circle as the emblem of his new party, the Union Movement. 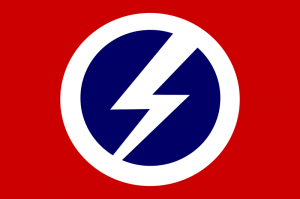 The B.I.G.O. “flash and circle” was introduced in The Silencers, but features even more prominently near the beginning of the second Helm film Murderers’ Row (also 1966). In this film, the head of the organization is played to hammy perfection by Karl Malden, who is seen wearing a flash and circle ring (like the S.P.E.C.T.R.E. octopus rings prominently featured in Thunderball), and seated in a kind of throne festooned with flashes and circles.

As a fascist super power, B.I.G.O. was by no means unique among the 60s spy spoofs. Indeed, one of the interesting features of that cinematic phenomenon – the vast scope of which (from about 1965 to 1969) is largely forgotten today – is that the villains in the American films and television shows were almost always in the B.I.G.O. mold: quasi fascist secret organizations out to “take over the world.” On the other hand, the British and Continental spy films of the period usually feature villains moved by pure profit, not ideology – or by some strangely personal motivation. (For example, the 1966 Dino de Laurentiis-produced Se Tutte le Donne del Mondo – released in the U.S. as Kiss the Girls and Make Them Die – features a villain who plans to kill off the human race and repopulate the planet by inseminating a bevy of beautiful women kept in a state of suspended animation.)

The reason for this difference between the American and European spy extravaganzas is not hard to discern. Americans had been sold on entering the Second World War with the promise that the fascists were out to “take over the world.” This ridiculous fabrication is still believed almost universally by Americans. Villains assimilated to this “fascist” model were therefore very easy for Americans to understand, and so Blofeld was transmuted into a plethora of little Hitlers and Mussolinis and Mosleys, armed this time with all the “secret weapons” we were frightened that the fascists might be developing in hollowed-out mountain lairs: death rays and flying saucers and doomsday devices of all kinds.

I started watching the 60s spy spoofs as a child, when local TV stations would run them in the afternoons. Bond was always a big TV event back then. He was only shown around my bedtime, and always with parental warnings (which seem absurd today). As a consequence, I was exposed to the Bond spoofs prior to ever being exposed to Bond. I thrilled to the adventures of Matt Helm, Derek Flint, The Man From U.N.C.L.E., Mission: Impossible, and The Avengers. The odd thing was that I usually found the villains more attractive than the heroes. The villains, for one thing, had those terrific, steel-lined underground lairs. They had snazzy uniforms (with thrilling lightning-bolt insignia). They were ruthless and efficient. They were serious and disciplined. They seemed bent on doing something important. The heroes, on the other hand, were usually wise-cracking hedonists – the most extreme example, of course, being Matt Helm.

Was this childhood attraction to B.I.G.O. and Thrush and Galaxy (we’ll come to the latter two organizations in a moment) a sign of my incipient fascism? Probably. But much more interesting is what these American spy spoofs reveal about the modern American soul. Let’s focus just on Matt Helm for the moment, as paradigmatic of the genre. It’s discipline, order, duty, and iron will (the villains) . . . against hedonism, debauchery, and selfish abandon (the hero). (I didn’t mention this earlier but Matt Helm always has to be talked into taking a break from chasing tail so that he can save the world.) The conflict between America and fascism in World War II was presented as the conflict between freedom and slavery. In Matt Helm, however, the truth is laid bare and the conflict revealed for what it really was. The freedom of Matt Helm is mere license. He’s out to make the world safe not for democracy and individual rights, but for boozing and boinking and sleeping till noon. That’s the American Dream, and he is living it. And so when those handsome, uniformed, lock-step, lightning-bolted troops in their spotless lairs are blown to kingdom come we can all cheer. Who did they think they were, anyway?
Posted by dino martin peters at 12:38 PM