Of course it's nice to hear some of Deno's singing in each fantasy and love scene.

Hey pallies, likes guess what pallies....more Helmer action ahead!  Today we visit with a interestin'ly tagged blog, "M.G.M (MOVIE GOLD & MOLD)," who way back in '07 shared potent pixs and witty words accently  the quartet of Helmer in total under the tag "THE MATT HELM SERIES WITH DEAN MARTIN."

Likes we gotta 'fess up that one thin' that drives us crazy 'bout this post is that several times the scriber sez "Deno" as in the title we used for this Dino-gram.  We ain't sure if they don't know better, or they are simply showin' their version of playfulness, but, of course, we powerfully prefer that our main man is tagged DINO, or at least Deano.

Other then that we have found mucho to enjoy in this rewardin' reflection on our most beloved Dino as swingin' spyster Matt Helm.  We devotely digs the the veritable variety of images used to set the Dino-tone from original post art for Helmers 1, 3, and 4 as well as a trio of provocative poses, the last two of which are purely purely potent Dino-images as we loves the expressions on our Dino's face.

The scriber of these words has some interestin' observations to share on our Dino as Helm and we found these particular words to be incredibly instructin': "The idea of Dean Martin in a James Bond type role is good enough to make anyone laugh out loud! And that's exactly what everyone of these Matt Helm movies delivered! What's not to love? the Go-Go music, the psychedelic colors, the groovy gadgets, the crazy women in mini skirts and a lot of sexual innuendos!"

Likes with remarkable recommendations likes that, likes who coulda resist gettin' into the Helmer action with our one and only Dino?!?!?!?!?!  NONE WE DARE SAY!!!!!  'Though it took us way way to long to gets these post into print at ilovedinomartin, as we often say, "better late then never."
We thanks the pallies at "M.G.M (MOVIE GOLD & MOLD)" for seein' mucho more gold then mold in  "THE MATT HELM SERIES WITH DEAN MARTIN."  To checks this out in it's original source, simply clicks on the tag of this here Dino-message. 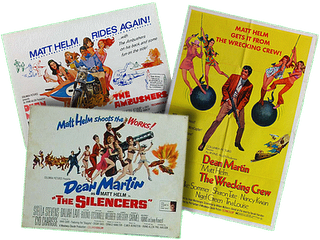 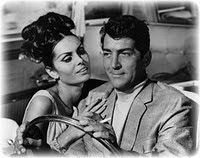 DEAN MARTIN AS MATT HELM IN:

THE SILENCERS
MURDERS' ROW
THE AMBUSHERS
THE WRECKING CREW

Although the movie titles and the character Matt Helm was based on the spy novels by Donald Hamilton, none of the elements of this fictional character was represented in this series of super spy movies, part of the James Bond craze of the 60's.


The idea of Dean Martin in a James Bond type role is good enough to make anyone laugh out loud! And that's exactly what everyone of these Matt Helm movies delivered! What's not to love? the Go-Go music, the psychedelic colors, the groovy gadgets, the crazy women in mini skirts and a lot of sexual innuendos!

What's really great is that Deno is probably over 50 years old here, much like Roger Moore as Bond. It's hilarious to see those beautiful young women just flock to this tired old man! It also obvious in some of these films he sees no reason to hide his old age...But having him pair up with hotties like Ann Margret, Stella Stevens, Elke Sommer or Sharon Tate, I don't see he needs to complain either..

Most of the action sequences you can tell Martin was using a stunt double, no suprise here. But the annoying thing is a lot of these movies the timing was pretty bad, it would take a second or 2 before Martin makes a facial response to something, the camera will be held to a shot of Deno with a blank look on his face, then he reacts and the audience are expected to laugh at that. Also the phony driving scenes are really bizzare, everyone can tell it's a non moving car with a panning background, but the car is shaking up and down like its treading over one speed bump over another. The company cars for the secret service must have really bad shocks or something, after a while the viewer needs to pull over from car sickness!

Of course it's nice to hear some of Deno's singing in each fantasy and love scene...one shot I really like, I think it was the "Ambushers" with Ann Margret, she;s wearing a dress that is made out of explosives, Matt Helm has to rip it off her then throws the dress at a picture to Sinatra and blows it up! Love it!

My personal favorite out of the series is "The Wrecking Crew", mostly because of the soundtrack by Hugo Montenegro, it has a bit of a Burt Bachrach/Swing Out Sister flavor. There are some great gadget in these films like a gun that shoot backwards, camera that launches smoke bombs, a round bed that flips over to the swimming pool...great outfits too like a woman wearing a bikini that serves as a telephone or a hat that is really a lit tiki torch!

In "The wrecking Crew" Nacny Kwan plays one of the villains name Yu_Rang, I love how every time she comes on screen you hear the little gong/Chinese music playing in the background, I think this is the only sfx still use today in many films and TV, like every Asian in the world walks around with their little oriental theme playing! However at the end of "The Wrecking Crew" during the closing credits the fans were informed to look out for the next installment of the series "The Ravagers", but the film was never made... This suggests to me that George Clooney ought to continue this film as Matt Helm in the same manner...with female leads such as Angelina Jolie, Lucy Liu, and Kate Hudson and so on...
Posted by dino martin peters at 7:38 AM

Yea, the scriber definitely needs to get with it. Deno? Really? Anyway...other than that, it is a cool cool piece. Not a bad idea havin' Clooney try to pull off the 5th Helm flick...I guess. But NO WAY will it compare to these 60's Dino gems.

Hey pallie, likes Danny-o, we are with youse all the Dino-way on this! Keeps lovin' 'n sharin' our mighty marvelous majestic...OUR ONE AND ONLY DINO!