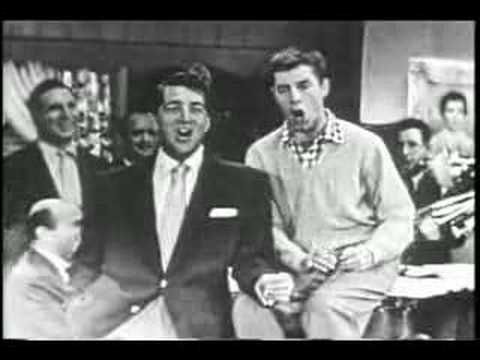 Hey pallies, likes we surely sure that all youse Dino-philes know the ol' sayin'  "One Dino-thin' leads to 'nother Dino-thin'.  And, likes pallies that's how today's Dino-devotion has come to be shared at our little ol' Dino-waterin' hole.  On Saturday we sweetly shared Mr.  Rich Kietzle  warmly wonderful  Dino-rememberin' post, "Dean Martin At 100--The Story Of His Signature Song."  Likes part of the particular Dino-gram included a youtube vid recordin' of   our Dino croonin'  the sun shiny tune, "I Don't Care If The Sun Don't Shine."

Well, likes one of the suggested vids on the right hand side bar was 'nother vital version of our Dino singin' this stunnin' standard and after viewin' it we keenly knew that we had to pass it 'long to all youse Dino-addicts and not just keep it to ourselves.  So, below is a coolest of cool clip from one of the 1953 episodes of The Colgate Comedy Hour with our most beloved Dino and his most beloved partner Mr. Jerry Lewis.  Our Dino brightly brings us all such Dino-happiness with  "I Don't Care If The Sun Don't Shine" which as Dino states he was performin' in the Martin & Lewis fab flick, "Scared Stiff."

Likes as an bountiful bonus this vid also includes our Dino and Mr. Lewis together performin' the fun fun tune "You'll Never Get Away" which includes the chorus "Your never get away..get away, get away....."  As largely loves how we can see how mucho mucho much fun our Dino and Jerry obviously have singin' this silliest of silly songs!  We knows all youse Dino-holics will enjoys these deeply delightful Dino 'n Jerry moments to the absolute max!


I Don't Care If The Sun Don't Shine

Jerry Lewis and Dean Martin sing a song from one of their movies. The song is followed by a second song, You'll Never Get Away. The 1953 clip is from a clip show they did on The Colgate Comedy Hour when Jerry Lewis injured his ankle and couldn't perform his usual zany stand up routines.

The episode is on The Colgate Comedy Hour Vol 5, and is available at HoughsVideos.50Megs.Com
Posted by dino martin peters at 7:52 AM

A great find and post DMP, I can't believe how young and good looking Dean look here with the rest of the group. A classic song and it is wonderful to see this special bonus videos well, nice work as always!

Hey pallie, likes Scotty-o, knows that we always always awesomely appreicate your patter in the cause of our Dino! We largely loves this classic clip from one of the Colgates. Keeps always lovin' our King of Cool....our DINO!