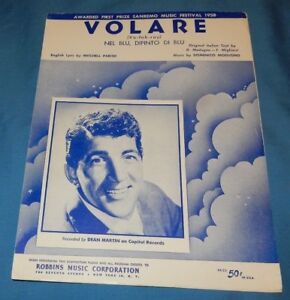 Hey pallies, likes today's Dino-devotion is powerfully puttin' the biggest of big Dino-buddha-grins on our faces, fabulously fillin' our hearts to the absolute Dino-brim with Dino-admiration, and beautifully bringin' the deepest of deep Dino-happiness to our bein's.  Likes from the online presence of  "The Harvard Gazette," yes youse read that right HARVARD GAZETTE! come the awesomely amazin'  noteworthy news, that at Harvard University as the tag of the post below supremely states,
"For the first time, researchers transmit sound data via a semiconductor laser."

Now we gotta 'fess up that we don't understand all 'bout this "Ultra-high-speed Wi-Fi breakthrough," as it is spoken of.  What we do understand that whoever was in charge of pickin' what was first transmitted is absolutely brilliant to our Dino-way of thinkin' 'cause as youse will find reverently revealed  below is that fantastic fact that our one, our only DINO's cool cool classic croon, "Volare" was swankly selected for this test run....'nother Dino-first.

Likes once 'gain we stand absolutely in awe of the transformin' power of our most most most beloved Dino...for of all the recordin's that have ever been recorded, of all the pallies that have ever make a recordin'....it is our King of Cool who was stunnin'ly selected for this hugest of huge honor!
Truly, truly, mere words fail us to speak of how thrillin' it is for all of us Dino-philes to see our main man chosen  to be found front and center in this technological advancement!

Thinks of the tons and tons of pallies who will be first introduced to our awesome amazin' Dino via this Harvard study.....showin' that there are unendin' ways that to this very Dino-day, new pallies are bein' deeply drawn into the Dino-fold and delightfully discoverin' Dino-happiness.  We, of course, thanks the pallies who have worked on this research, to the one or many who made the chose of sharin' our Dino in this marvelous manner, and to Miss Leah Burrows who put pen to paper to share this with the world wide web.  To checks this out in it's original source, and to listen to this Dino-historical moment, simply clicks on the tag of this Dino-report.

And, we couldn't resist the Dino-op to share a wonderful youtube vid of our Dino croonin' this touchin' 'n tender tune!   Enjoys Dino-holics everywhere and stay tuned in and turned on to our Dino and where he will be lovin'ly lifted up next!!!!!

This recording of Martin’s classic “Volare” was transmitted wirelessly via a semiconductor laser — the first time a laser has been used as a radio frequency transmitter.

In a paper published in the Proceedings of the National Academy of Sciences, researchers from the Harvard John A. Paulson School of Engineering and Applied Sciences (SEAS) demonstrated a laser that can emit microwaves wirelessly, modulate them, and receive external radio frequency signals.

“The research opens the door to new types of hybrid electronic-photonic devices and is the first step toward ultra-high-speed Wi-Fi,” said Federico Capasso, the Robert L. Wallace Professor of Applied Physics and Vinton Hayes Senior Research Fellow in Electrical Engineering at SEAS and senior author of the study.

This research builds off previous work from the Capasso Lab. In 2017, the researchers discovered that an infrared-frequency comb in a quantum cascade laser could be used to generate terahertz frequencies, the submillimeter wavelengths of the electromagnetic spectrum that could move data hundreds of times faster than today’s wireless. In 2018, the team found that quantum cascade laser frequency combs could also act as integrated transmitters or receivers to efficiently encode information.


Play
00:08Current time00:15
The song “Volare” by Dean Martin is transmitted via a laser frequency comb, the first time a laser has been used as a radio transmitter.

Now, the researchers have figured out a way to extract and transmit wireless signals from laser frequency combs.

Unlike conventional lasers, which emit a single frequency of light, laser frequency combs emit multiple frequencies simultaneously, evenly spaced to resemble the teeth of a comb. In 2018, the researchers discovered that inside the laser, the different frequencies of light beat together to generate microwave radiation. The light inside the cavity of the laser caused electrons to oscillate at microwave frequencies — which are within the communications spectrum.

“If you want to use this device for Wi-Fi, you need to be able to put useful information in the microwave signals and extract that information from the device,” said Marco Piccardo, a postdoctoral fellow at SEAS and first author of the paper.


This device uses a frequency comb laser to emit and modulate microwaves wirelessly. The laser uses different frequencies of light beating together to generate microwave radiation.

The first thing the new device needed to transmit microwave signals was an antenna — so the researchers etched a gap into the top electrode of the device, creating a dipole antenna (like the rabbit ears on the top of an old TV). Next, they modulated the frequency comb to encode information on the microwave radiation created by the beating light of the comb. Then, using the antenna, the microwaves containing the encoded information radiate out from the device. The radio signal is received by a horn antenna, filtered, and sent to a computer.

The researchers also demonstrated that the laser radio could receive signals. The team was able to remotely control the behavior of the laser using microwave signals from another device.

The Harvard Office of Technology Development has protected the intellectual property relating to this project and is exploring commercialization opportunities.

Well, pals...likes we always says...youse just don't knows where or when Dino will pop up next! Our pal has gone Hi-tech! Man...I just can't help but thinks...that somewhere up there...Dean is gettin' a big ol' kick in the head from this one! Haha!!

It never seems to end for Dean Martin, he is now leading the technology revolution to new heights! I am guessing the leaders of this research are fans of Dean and it was great to see him lead the way to a new tomorrow. A wonderful find and post DMP!

Hey pallie, likes Scotty-o, thanks for more incredible insights...and hangin' with all us Dino-philes here at ilovedinomartin. Make it a Dino-day every day and keeps lovin' our wonderfully wise DINO!