Equipped with one of the ever-present cigarettes.....and often a glass of what appeared to be gin, Martin would half-close his heavy-lidded eyes and let his audiences into the transitory, heart-breaking nature of bubbles.

Hey pallies,  likes we gotta 'fess up that that we stand in absolute awe,  YES! absolute awe of how wise writers are incredibly intriguin'ly integratin' the life, the times, and the teachin's of our most beloved  Dino in intensely imaginatively intelligent ways.  Case in point is the perfect prose below that powerfully pairs up our one and only Dino with Aussie Prime Minister Mr. Scott Morrison.

All youse Dino-philes can read the comparisons between our Dino and Prime Minister Scott Morrison below and see how coolly crafted Mr. Wright has fashioned his wise words.  We are beautifully bodaciously blown 'way, as we stated 'bove by the incredibly intriguin'ly integration of our Dino into present times and situations.   And, pallies, likes think 'bout the tons of new pallies who are bein' introduced to our Dino for the first time and how many will be deeply drawn into the inner Dino-circle by such excellent efforts as newspaper scribers like Mr. Tony Wright.

We swankly salute Mr. Tony Wright and all the pallies at "The Sydney Morning Herald for this remarkable read and for lovin'ly liftin' up the name of our most beloved Dino in this wondrous way.
To checks this out in it's original source, simply clicks on the tag of this Dino-gram.  And, likes we couldn't resist sharin' a youtube vid our our one and only Dino croonin' 'bout bubbles!

Dean Martin, crooner and wisecracker, was known in the 1960s as the King of Cool, a description unlikely ever to attach itself to Scott Morrison, who is more from the sweaty vaudeville school of performance.

Both share, however - past tense, of course, for the late Dino - a thing for bubbles.

It’s just that their approach to bubbles comes from very different perspectives. 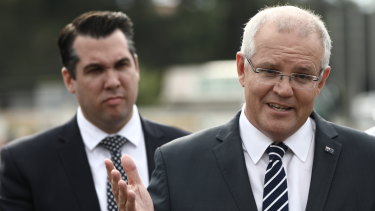 Morrison, Australia’s current Prime Minister, has taken to dismissing questions he doesn’t want to answer as "questions from the bubble".

Want to know, say, whether voters might punish any of his Liberal candidates because they voted for Peter Dutton for prime minister?

"That is a bubble question. I will leave that one in the bubble," snapped Morrison this week when asked about the judgment of the member for Deakin, Michael Sukkar, who had indeed thought last year that it was a splendid idea that the not-entirely loved Dutton should lead the nation.

The Prime Minister's visit to the border of two Liberal-held seats shows that some heavy lifting needs to be done in Melbourne.

He was at it again on Tuesday when a very friendly voter in the Victorian seat of Corangamite lobbed a slow-ball question about last year's Liberal leadership coups.

"We read in the newspapers and see on television all the time that Malcolm Turnbull was ousted and the inference seems to be that you ousted him," said the good citizen, adding helpfully: "That is totally at variance with what was reported at the time. We find this very distressing because we want you back as Prime Minister and I wonder if you could comment on what actually happened so people really know and they don't get this story all the time about it."

"That's true," responded Morrison warily, searching for an empty spot within a handy bubble for this inconvenient bit of history.

"I can only repeat what Malcolm himself said when he confirmed, as you've just said, that I was supporting him and there was a change but when these things happen you have to focus on the future."

And that was his entire explanation. The bubble was closed.

Morrison’s bubble is where the elites of Parliament House, Canberra, are confined. They are, in his telling, hermetically sealed off from understanding the concerns of real Australians.

And these days, Morrison would very much like the very name of Peter Dutton to be detained within the silence of a bubble, too.

This snappy method of dodging unpalatable subjects is a new version of his old soft-shoe shuffle when he was minister for border protection and he didn’t want to answer questions about asylum seekers arriving by boat.

"On-water matters," he’d declare, sealing even the high seas within a giant bubble.

As he desperately builds new balloons of silence to protect himself during what is described as an election campaign, Morrison, whose musical tastes exist within a 1980s pub-rock bubble, might do well to extend his range to include Dean Martin’s laid-back lounge music. 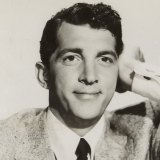 One of Dino’s well-known easy listening songs was I’m Forever Blowing Bubbles (a song that's been done by just about everyone, right back to the 1920s, but rarely with Dean Martin's style of cool).

Equipped with one of the ever-present cigarettes that eventually killed him and often a glass of what appeared to be gin, Martin would half-close his heavy-lidded eyes and let his audiences into the transitory, heart-breaking nature of bubbles.

And then he’d pop their delusions.

"They fly so high, nearly reach the sky.

Posted by dino martin peters at 9:48 AM

I still find it amazing that people today are still being compared to the one and only Dean Martin.There are very few from yesteryear that are still being mentioned time and time again like Dean. I have a feeling that the man would have a good chuckle at this. A great find and post DMP!

That is VERY cool, pal! I'm also diggin' Tony's Dino-like perspective of this fella, Scott. We all wanna sell a beautiful dream to our audience...I suppose. Only Dino could TRULY pull it off the way he did, though. Thanks for sharin'!

Hey pallie, likes Scotty-o, our most beloved Dino how totally totally thrillin' to know that our most beloved Dino is the swankest of swank standard by which other pallies are measured!
Thanks ever so much for your deep devotion to our Dino via our humble little Dino-conclave.
Keeps lovin' 'n growin' in DINO!