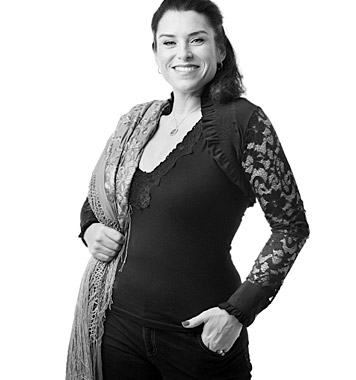 Hey pallies, likes it is always so remarkably refreshin' to see how our beautifully beloved Dino's croonin' continues to be awesomely accented by a virtual vibrant variety of the creative arts.  Likes our pallies at google 'lerts recently sent us to the home web location of Victoria, BC, Canada's "Monday Magazine" where scriber Miss Monique Salez  (pictured on right) shares her prose tagged "Hubbard Street makes a grand finale for Dance Victoria season.  Likes Dance Victoria's mission is to bring  "the world’s best dance to the Royal Theatre and supports the development of new dance from its beautiful studios in Victoria’s Quadra Village.

As sweetly shared below, Dance Victoria is bringin' the fabulously  famous Hubbard Street Dance Company located in Chicago for a couple of performances on April 12 and 13 of this very Dino-week, and one of the powerful pieces bein' performed is tagged "PACOPEPEPLUTO," which  "is a playful romp set to three popular Dean Martin songs."  In doin' a bit of 'net researchin' we discovered that "PACOPEPEPLUTO" was created in 2011 and first presented by Hubbard in 2012.  In doin' a bit more lookin' 'round the web we found that one of the Dino-croons is "Memories Are Made Of This."

Likes how absolutely awesomely amazin' to see the professional dance scene usin' Dino-classics to under score modern dance movements!  Only wishes that we coulda hop a plane and take off for Victoria, BC to view professional Hubbard Street dancers movin' to our most beloved Dino's croonin'!    Such awesome artistic uses of our King of Cool's marvelous music will continue to bring more and more pallies into the Dino-fold for Dino-sure!

We thanks Miss Monique Salez and the pallies at "Monday Magazine" for sharin' the news of 'nother wonderful way that our one and only Dino is continuin' to have his glorious gifts used in so many ultra ubber unique ways!  To checks this out in it's original source, likes simply clicks on the tag of this Dino-report.

Dance Victoria’s final offering for the season at the Royal Theatre is a compelling mixed program by the virtuosic dancers of Chicago’s Hubbard Dance, featuring works by Crystal Pite, Alejandro Cerrudo and Robyn Mineko Williams.

During two performances April 12 and 13, Pite, our favorite local dancer-come-world-class-choreographer, presents “A Picture of You Falling” and “The Other You,” two parts of her four-part work entitled The You Show.

She offers that the work derives from a “fascination with familiar storylines of love, conflict and loss, and the body’s role in providing the illustrative shape of those stories.” Always evocative and innovative, the choreographer expresses a desire that these works be an invitation “to locate (oneself) in the dancer, to recognize (our) own dramas translated into fierce physical language, and to see (oneself) falling and flying as the hero of your own existence.”

Hubbard’s former resident choreographer, Cerrudo, whose work Silent Ghost was presented by Aspen Santa Fe Ballet last year at the Royal Theatre to extended and exuberant applause mid-program, is back with two works.

The first, PACOPEPEPLUTO, is a playful romp set to three popular Dean Martin songs where three male dancers, in flesh-toned undergarments, express a potent physicality peppered with humor and charm. In contrast, award-winning choreographer Cerrudo’s second work, Lickety Split, utilizes the emotive music of Devendra Banhart in a series of vignettes where the audience experiences a conversation between dancer’s bodies, where the speaking and listening provides impulses that result in a sensuous, intimate and dynamic expression of relationship.

“The intimacy of the pieces will fit perfectly on stage of the Royal Theatre,” says company general manager Bernard Sauve.

Invitational, playful, intimate and dreamy, this mixed program strums many strings for dance theatregoers and provides a lovely finale to a strong season from Dance Victoria. As for next year, Sauve is particularly excited to celebrate our “unique West Coast dance” creators: Ballet BC with a distinct storytelling of Romeo and Juliet, and Pite’s Kidd Pivot company presenting the acclaimed Revisor.

Attendees for next weekend’s performances are invited to a free, pre-show chat at 6:45 p.m. both nights in the West Lobby (Blanshard Street) of the theatre. Showtime is 7:30 p.m.

Dino is timeless. What more is there to say, pals?

Hey pallie, likes Danny-o may we add that our most beloved Dino transcends all boundaries created by mere mortals understandin'......DINO IS IT! Keeps lovin' 'n sharin' our awesome amazin' all-encompassin' DINO!