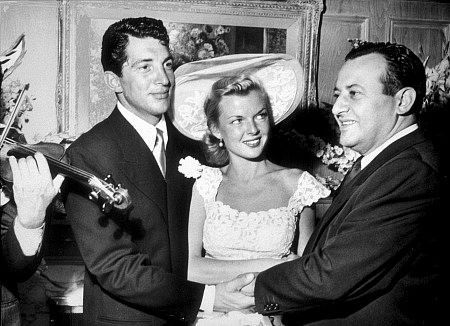 Hey pallies, likes on this day, September 1 in the year of our Dino 1949,  the weddin' bells did chime for our most beloved Dino and his queen of beauty bride Miss Jeanne Biegger. Dino and Miss Jeanne, wife numero duo, tied the knot at  the pad of Mr. Herman Hover.  This date likes 'gain holds the deepest of deep significance since Miss Jeanne   passed away on August 24, 2016  joinin' our Dino forever in the here after.

As we, with reverence,  remember this day of absolute awesome bountiful bliss for our Dino, ilovedinomartin shares with you a post that a Deanager tagged  Catie shared at her tumblr blog, "They always look better at night..," on this day of Dino-significance, last in 2012.  Our Catie combines an outstandin' weddin' pix of the beau-ti-ful couple with some potently powerful  prose scribed by Mr. Jerry Lewis from his magnificant Dino-bio, "Dean and Me: A Love Story."

Just likes we  totally totally  grooves to be likes readin' these kind of greatly glorious Dino-details....and these remarkable  reflections from Mr. Lewis notin' the extremely close relationship that our most beloved Dino had with his bestest of best pallie Jerry.   ilovedinomartin sez our thanks to Miss Catie for creatin' this Dino-memory on her tumblr account, sure to bring many of today's nouveau hipsters to the keen knowledge and awesome adulation of our most most beloved Dino 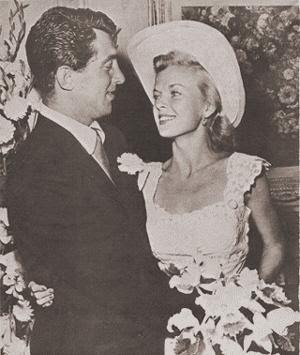 
Jerry Lewis to Dean Martin on the day of his wedding to second wife Jeanne Biegger, September 1, 1949.
Posted by dino martin peters at 7:31 AM

Hey pallie, likes Danny-o, my sense gets greater by the day that Mr. Lewis loved our Dino more then life itself. Keeps lovin' 'n sharin' our one, our only DINO!