......Martin is definitely playing against type--there’s no boozing or womanizing or double-entendre dialogue.

Hey pallies, likes today we are proudly pleased to share with all youse Dino-philes a remarkable, reflective review of one of our Dino's most neglected big screen efforts, "Mr. Ricco."   Reviews of "Mr. Ricco" are rare to find on the ol' 'net and we are greatly grateful to Mr. Bill Shute, prolific blogger at "BLOG TO COMM," for usin' his awesome ability to put pen to paper in his prose, "MOOM PITCHER REVIEW BY BILL SHUTE! MR. RICCO (1975) STARRING DEAN MARTIN!"

Likes as youse will note in Mr. Shute's scribbin's. "Mr. Ricco" was our most beloved Dino's last "starrin' role" on the silver screen followed in the '80's with his pleasurable presence with a ton of his fellow actor pallies in the Cannonball Run duo of escapist fun and frolic.  "Mr. Ricco" is a deeply deep dramatic role for Dino. and likes it is interestin' that our King of Cool would pretty much draw his awesome actin' career to a close with a dark drama havin' done almost all comedy farces and westerns durin' the swingin' sixties and seventies...with the exception of the 1070 blockbuster "Airport."

We appreciate Bill's appreciato for our Dino's wonderful work in "Mr. Ricco" and especially completely concur with this Dino-thought....

"In Mr. Ricco, Martin is definitely playing against type--there’s no boozing or womanizing or double-entendre dialogue. Martin is playing a real character and not just a variation on his persona. The character is awkward, lonely, suffering from the health problems that come with age, and has a vulnerability that is moving."

We gives Mr. Bill Shute keen kudos for this well written and incredibly insightful lovin' look at our most beloved Dino as "Mr. Ricco."  "Mr. Ricco" will be shown on the Turner Movie Channel this Wednesday September 26 to conclude their month long celebration.  Youse can check out the details
HERE by clickin' on the tag for "Mr. Ricco," which will be the last flick shown in the Dino-festival.
To checks out this post in it's original source, likes simply clicks on the tag of this Dino-gram. 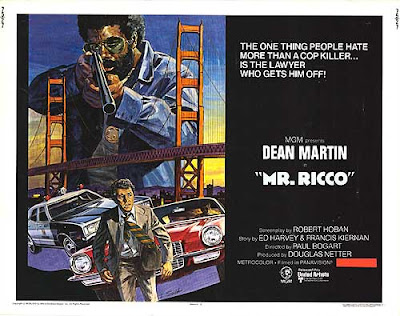 MR. RICCO was Dean Martin’s final starring role (he had only guest star roles after this) in a feature film, and it came and went very quickly. I remember it appearing out of the blue and seeing a newspaper ad for it, but by the time I was able to arrange seeing it, it had vanished from all screens in the Denver area, and I don’t remember it re-appearing later on the bottom of the bill at any local drive-ins. At most, it was out for a week in January 1975.

Of course, Dean Martin would not be the first name one would think of as the star of an urban crime film, which is essentially what this is, although Martin is an attorney, not a cop. You need a jittery, edgy presence, which is why Sinatra could do that kind of cop role well in his later years. Director Paul Bogart had previously directed CANCEL MY RESERVATION, the 1972 swan song of Bob Hope, which did get a theatrical release but seemed to be a network Movie Of The Week within months, so maybe some studio official thought he had a proven track record with past-their-prime household names. The big difference between that and Mr. Ricco is that in the Hope film, Bob was just doing the same old routine and running it into the ground. In Mr. Ricco, Martin is definitely playing against type--there’s no boozing or womanizing or double-entendre dialogue. Martin is playing a real character and not just a variation on his persona. The character is awkward, lonely, suffering from the health problems that come with age, and has a vulnerability that is moving. Of course, Martin had done diverse dramatic roles successfully a number of times before (THE YOUNG LIONS, for instance, with Marlon Brando and Montgomery Clift) in the post-Martin and Lewis era, but with the success of his weekly TV variety show, where the Dino persona--with a drink in one hand and a scantily-clad blonde on the other arm--was branded permanently into the consciousness of the average American, it was hard to think of him as anything else. This film came after his variety show went off the air but before he took the same boozy persona and brought it to a long series of celebrity roast TV specials, which are still being played on cable TV and sold on DVD today. The 70’s was a Golden Age of urban crime films, and even John Wayne made two of them in the 1974-75 period, MC Q and BRANNIGAN. The makers of this film wisely did not make Martin a cop--he doesn’t seem to have the energy for that--instead, they put him into the world of police and criminals as an attorney, and a burned-out, second-string attorney. 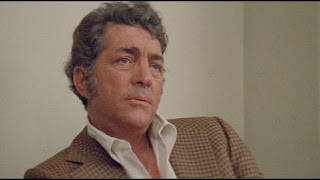 MR. RICCO looks and plays a lot like a TV movie (in fact, Martin’s daughter Deana refers to it as a TV show “that did not last very long” in her book about her father, so even she had it confused with a TV movie!), though with a bit more violence and darker, moodier photography than one would find on TV. Much of the plot revolves around Black characters (with Martin as a kind of outsider to their world) and a Black militant played by Thalmus Rasulala (well-remembered from COOL BREEZE and BLACULA), and the cast also includes Denise Nicholas (from ROOM 222) and the young Philip Michael Thomas, pre-MIAMI VICE. In Nick Tosches’ book on Dean Martin, Rasulala is quoted as describing Martin as detached and somewhat out of it during the film’s shoot, keeping to himself and being polite but not really connecting with the cast. If you were not a Martin fan, you could say he was phoning it in. He was also in the midst of a painful divorce, but he was always the professional and he always made it look effortless. If you decide to watch the film a second time but forget about the “plot” and concentrate entirely on Martin’s performance and characterization, tuning everything else out, as I once did, you’ll probably rate the film much higher and find a lot to contemplate.

The plot introduces many different and interesting elements in its 98 minutes, never really going all the way with or developing any of them but dropping them here and there, which oddly works here since that’s probably how the average police investigation or the average week in someone’s life would seem while you were living it, but the “whodunit” climax is an outrageous cheat and makes me wonder if this project was just finished (maybe I should say “finished off”) because it was contracted and a job needed to be done. I can’t imagine anyone involved in the production thinking that a film with such a ludicrous resolution could ever get a good review. MGM/UA’s dumping of the film onto the market with little fanfare or promotion would also lead one to that conclusion--it was a product that had a contractual obligation to be released, and they released it....and quickly moved on.

San Francisco is always a good setting for a crime film, and the locations are fresh and unfamiliar. The supporting cast, those mentioned above plus Eugene Roche (for years known by all as the dishwasher character selling Ajax Dishwashing Detergent, but also a man with a long string of stage credits, and memorable appearances in everything from SLAUGHTERHOUSE FIVE to ALL IN THE FAMILY) as the burned-out cop that Martin’s Mr. Ricco tangles with, all do a great job (no doubt thinking it was a good break to get cast in an MGM film starring Dean Martin!). And Dean Martin, although looking tired and detached, creates an interesting character, and those qualities actually help make Ricco seem real. Martin plays him as if he’s not starring in a movie but maybe forced to do jury duty, and having to do it during a week when he’d hoped to be doing something else, yet somehow that approach fits. 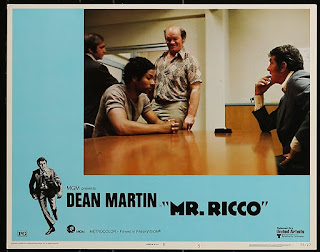 Fans of Dean Martin or of lesser-known 70’s urban crime films will want to check this out, and except for the ending, you should find your 98 minutes to be well spent. It’s no classic, but just imagine it as a pilot for an entry in the NBC MYSTERY MOVIE anthology series, except with Dean Martin. I would have watched such a show religiously back in the day. Dean Martin certainly finished off his days of film stardom in a much more classy and successful way with MR. RICCO than Bob Hope did with CANCEL MY RESERVATION, although that’s not much of a compliment.

Posted by Christopher Stigliano
Posted by dino martin peters at 8:28 AM

Cool review, I thought. I dug Mr. Ricco. I liked the change of character for our pal. He could pretty much pull off any role.

Hey pallie, likes 'though "Mr. Ricco" didn't set box office records like "Airport," it has an powerfully profound performance by our most beloved Dino. So thrilled that it is available on DVD and we gets to view it whenever we wants to. Keeps lovin' 'n sharin' our one, our only DINO!

Maybe he was sending a message?

Hey pallie, likes Miss AOW, we bountifully believes that our Dino is always sendin' those welcomed in to his world marvelous mighty majestic messages...we only need to pay attention to hear and heed 'em! Keeps lovin' 'n learnin' from our awesomely amazin' DINO!