We’ve had the entire restaurant singing to Dean Martin on a Saturday night. 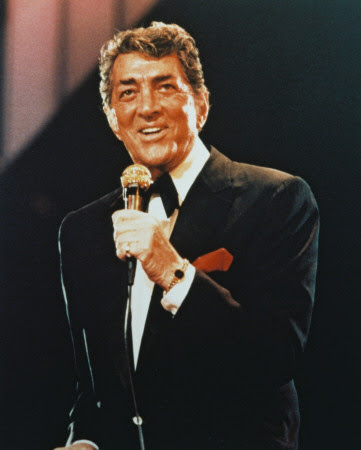 Hey pallies, likes we ain't gonna be 'round this Saturday, so a bit early here is a perfect post for Saturday with our Dino!

Likes words can't begin to describe the deep deep delight we gets when usin' the blessed blog search tagged Twingly Advanced Blog Search.  Why so you quire?   Well likes we never ever know where the pallies at Twingly will send us next and what sorta Dino-adulation that we will encounter.

Likes case in point woulda be a few 'go when Twingly sent us off to the restaurant review blog tagged "So Cal Restaurant Show," which is a podcast first and printed blog secondly.  The "about" section of the blog tells us that..."“The SoCal Restaurant Show,” the ultimate locals’ guide to food, restaurants and beverages with a side of travel with food at its center can be heard on AM 830 KLAA each Saturday morning from 10:00 a.m. to 12 Noon. It’s hosted by seasoned food, libation, and travel journalist, Andy Harris, and Chef Andrew Gruel the Executive Chef and Concept Creator of Slapfish Restaurant Group."

Of course, likes why Twingly sent us to this food pad is 'cause the local restaurateur, Mr. Rick Reich of Brix at The Shore was interviewed 'bout his business, and as you will note below Reich told scriber Mr. Andy Bell that " We’ve had the entire restaurant singing to Dean Martin on a Saturday night."

Now that's an experience that we are certain that all Dino-philes woulda coolly craves bein' a part of!!!!!  Likes we knows if we ever gets to So Cal, we'll be sure of makin' the scene at Brix on a Saturday night to be part of the Dino-action.  We can just picture a full Saturday night crowd croonin' 'long to our most beloved Dino!!!!  We're purely positive that many musta been drawn into the Dino-fold through such experiences!!!!!

We thanks Mr. Andy Bell and the So Cal Restaurant Show for accentin' Mr. Rich Reich's restaurant and for Reich's sharin' the Dino-devotion of Saturday night eaters at his food pad.  Likes to checks this out in it's original source, simply clicks on the tag of this Dino-gram.  btw pallies, we have only included a small portion of Mr. Bell's report, so be sure to clicks on the link to read the full report.

When it comes to personable characters with their own sense of style on the Long Beach dining scene, Rick Reich of Brix at The Shore in Belmont Shore wears the befitting crown. It’s a taste of the Big Apple with its iconic, piled-high pastrami sandwiches, intimate wine bar ambiance and a standout rotating selection of craft beer. It’s all of 65-seats.....................

“I call Brix at The Shore an adult amusement park,” says owner Rick Reich, who also doubles as the restaurant’s sommelier. “Belmont Shore has plenty of places that appeal to college kids, but what the area was lacking was a hangout for a more established crowd who needed a place to unwind after work, enjoy a good glass of wine or beer, grab a bite to eat, and occasionally break out into song – trust me, it’s happens. We’ve had the entire restaurant singing to Dean Martin on a Saturday night. And that’s what makes Brix so appealing.”

Haha!! Sounds like a good time to me, pal!

Man, how I'd have loved to have been part of this!


I have ro second that, what a great time this must be. A wonderful meal AND songs by Dean Martin as desert, now who wouldn't want to be there? Thank you DMP for this great post.

Hey pallies, likes Danny-o, Scotty-o, and Miss AOW...thanks for the patter.....wouldn't it be the coolest of all ilovedinomartin gatherers to meet up at this So Cal restaurant on a Saturday to croon 'long with all the other pallies gathered there! Keeps lovin' 'n sharin' our most most beloved Dino!