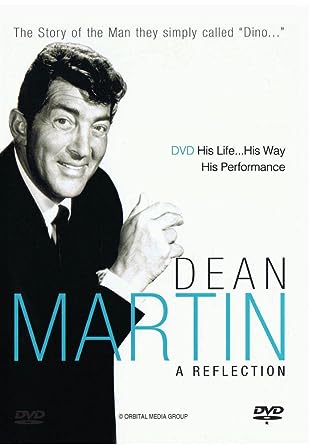 Hey pallies, likes a few 'go we went on over to Amazon to see what has been recently released  in the way of Dino-treasure and we were totally total thrilled that one of the most most marvelously fantastically fantastic Dino-documentaries previously unreleased on dvd,  that we have been completely cravin' havin' for our very own for so so long,  has finally been released for sale to the masses of Dino-holics everywhere.

On February 10th, the delightful documentary "Dean Martin A Reflection," which we have shared the youtube vid of on a couple of occasions,  HERE and  HERE, is now available to own personal copies of, and at a fair price as well.   Originally created for the Brit small screen in 2006, it's a fantastic feast of our Dino's performances with tons of patter on the facts and figures of Dino-history.

Likes this is one deeply devoted  documentary for Dino-philes everwhere who are  hungry for growin' deeper, purer, and truer in their passion for our Dino.  We so so love how the folks that put together this wonderful package have worded their devotion......"The  Story  of the Man they simply called "Dino..." His Life, His Way, His Performance."

Likes this is a purely powerful primer for those new to our most beloved Dino as well as seasons Dino-philes, and likes everyone else in between!   Narrated by Mr. Duncan Wells, edited by Mr. James Wotson,and produced by the pallies at  CRASE, this powerful production is over 70 minutes in length and includes parts of recorded interviews with our one and only Dino.

Below is the youtube vid of "DEAN MARTIN: A REFLECTION," which we are most grateful is still up on youtube 'long with a listin' of the Dino-croons included in this production.  We trust that many of Dino-devotees likes us are goin' to want to put their orders in to make this part of their personal Dino-collections.  A couple of days 'go we put our own order into a local store and can't wait to get our hot little Dino-hands on it.  To checks out the details that we found at Amazon, simply clicks on the tag of this Dino-gram.

An informative documentary of Dean Martin, one of the most talented performers of his time. He grew up in Ohio and became a star performer, became a member of the infamous Rat Pack, was part of the successful comedy duo with Jerry Lewis and was a charismatic performer. This documentary features some of his best live performances.
Narrated by Duncan Wells, edited by James Wotson and produced by CRACE.

1. Everybody Loves Somebody
2. You Must Have Been a Beautiful Baby
3. King of the Road
4. Mambo Italiano
5. Paper Doll - The Mills Brothers
6. That's Amore
7. Carolina in the Morning
8. Almost Like Being in Love
9. You're Nobody Till Somebody Loves You
10. You Made Me Love You
11. Volare / Evening in Roma
12. Send Me The Pillow That You Dream On
13. Birth Of The Blues - The Rat Pack
14. The One I Love (Belongs To Somebody Else) - with Frank Sinatra
15. One For My Baby And One More For The Road
16. You Do Something to Me - With Frank Sinatra & Judy Garland
17. Everybody Loves Somebody Sometimes
18. Pennies From Heaven
19. Let There Be Love / You're Nobody Til Somebody Loves You - With Frank & Judy
20. There Goes My Heart
21. Memories Are Made Of This

Def I nate ly grabbin' this! Very cool Dino-Bio! Thanks for postin' , pal!!!

Always great to see new Dino-product on the market, thanks for the info DMP!

Great deal with this DVD!

Thanks for the heads up on this, DMP.

Hey pallie, likes Danny-o, likes we were a thinkin' man that this woulda be a great great visual primer for you to use with both Nicky and Stella as you help them grow deeper and stronger in our most beloved Dino! Keeps lovin' 'n sharin' our one, our only Dino!

Hey pallie, likes Eddie-o, we know that your two wee boypallies are a bit young to share this dvd with, but as we just pattered to Danny-o, we thinks this is a powerfully potent primer 'specially cool to use as a audio visual resource in helpin' today youngens grow stronger and deeper in Dino! Keeps lovin' our most beloved Dino!

Hey pallie, likes Miss AOW, we thinks this is one of the wisest of wise Dino-investments that any Dino-devotee can acquire. Keeps lovin' our most beloved Dino!