Hey pallies, likes dudes our pallies at the Dean Martin Timeline (clicks on tag of this Dino-gram to goes there) have 'gain 'lerted us that today is still  'nother Dino-historical date in the life and legacy of our most beloved Dino. Likes it was on this date 70 years ago today that our great man gots himself his first radio gig where he crooned dem tunes for a quarter of an hour on a New York station.

Just wonderin' if back in those early days they recorded such programmes...likes woulda it be likes the coolest if we coulda gets cd copies of those Dino-episodes of  "Songs By Dean Martin"? Never was, never will be anyone as cool as the King of Cool...oh, to return to the days when Dino walked the earth! Dino-dreamin', DMP

btw pallies, this Dino-pix seems to be early early Dino...any of you dudes have any clues about whena and wherea it mighta be snapped? 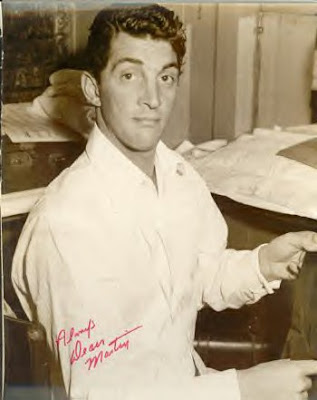 August 21, 1944 Dean gets his own radio program called "Songs by Dean Martin," a 15-minute show from New York where Dean would croon four or five songs

So many EXCITIN' anniversaries this year! Love it!!!

Hey pallie, likes we're sure that each and every day has some amazin' Dino-significance...some days just more then others. Keeps lovin', keeps studyin' our most beloved Dino!

It is hard to believe it has been 70 years - time does march forward so fast.

Thank you for bringing this important Dino milestone to your faithful readers my friend.

Hey pallie, likes Scotty is it truly our pure pleasure to keeps Dino-philes likes you up-to-date on all these important dates in the life, times, and teachin's of our Dino!
Keeps lovin', keeps sharin' our most beloved Dino!