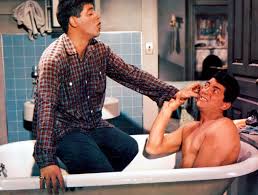 Hey pallies, likes 'gain we were plannin' to share more Dino-inspirational posters from the recent Dino-contest, but likes 'gain we found a Dino-'lert in our email inbox that sent us in 'nother Dino-direction.  So, today we takes you to a very very multi-media blog, The A.V. Club, which is  "an entertainment website published by The Onion."  Likes now whiles The Onion is full of the swankest of swank satire, "The A.C. Club is full of total truth, at least in the case of their recent Dino-homagin' post.

Likes what caught our Dino-attention is their blog post " Like reading a comic book starring Jerry Lewis and Dean Martin," scribed by staff writer Mr. Ignatiy Vishnevetsky.  Of course, we are sure that all youse in-the-Dino-know pallies likes knows that Vishnevetsky's post simply must be 'bout our most beloved Dino and his most beloved partner Jerry Lewis' big screen splash, "Artists And Models."

Now likes gotta 'fess up that Ignatiy doesn't any specific Dino-references, which is, of course, a great disappoint me to us, but he gives the hugest of huge nod to "AAA," and likes we couldn't 'gree more.
Vishnevetsky writes, "Which brings us to Artists And Models, the first movie Lewis made with Tashlin, and arguably the best of his 16 collaborations with comedy partner Dean Martin. (The other contender for that title is their final film together, Hollywood Or Bust, also directed by Tashlin.) Artists And Models is one of the most exuberant and colorful American movies of the 1950s.  Indeed, we 'fess up that "AAA" is indeed our most fav of fav Dino and Jerry flicks and we are simply thrilled to see this scriber 'gree with us!

And, we are grateful that Mr. Vishnevetsky has included the trailer for this Dino-epic which, of course, will certainly draw many into wantin' to see the full flick and add many more to the Dino-fold.  To checks this out in it's original format, simply clicks on the tag of this here Dino-gram.  Thanks to Mr. Ignatiy Vishnevetsky and all the pallies at The A.V. Club for puttin' their readership on to this greatest of great Martin and Lewis big screen epic.  Dino-always, ever, and only, DMP

Every day, Watch This offers staff recommendations inspired by a new movie coming out that week. This week: It’s Comics Week at The A.V. Club, and because we’ve already highlighted superhero movies and comic-book adaptations that aren’t about superheroes, we’re using the next five days to single out films whose imagery, storytelling, or themes are influenced by comics.

There’s a meaty essay to be written about the lengths to which modern-day Americans will go to distance themselves from Jerry Lewis. Lewis represents the unrefined tastes of some earlier era of moviegoing, explained away through pejorative references to “slapstick” and “the French.” (Never mind that Lewis was never as popular abroad as he was in the U.S.) The truth, of course, is that though Lewis produced his share of dross, the gold remains pretty damn funny, and the stuff that isn’t funny tends to be strange and formally audacious in a way Hollywood comedies rarely are. It’s possible to be turned off by Lewis’ mugging (which is fairly relentless) and still appreciate the command of style displayed by his best films, whether it’s the ones he directed himself, or his collaborations with cartoonist-turned-director Frank Tashlin.

Which brings us to Artists And Models, the first movie Lewis made with Tashlin, and arguably the best of his 16 collaborations with comedy partner Dean Martin. (The other contender for that title is their final film together, Hollywood Or Bust, also directed by Tashlin.) Artists And Models is one of the most exuberant and colorful American movies of the 1950s. It uses the era’s comics boom as both a visual reference and a plot point, spinning a story about two pairs of mismatched roommates into a quasi-surreal satire of anti-communist paranoia, fandom, and art, packed with throwaway quotations (it may contain the first Rear Window riff in film history) and sight gags. All that, and it’s pretty funny, too.

The visual palette is Technicolor at its brightest and most saturated, with colors slathered across the widescreen frame. Artists And Models was shot in VistaVision, which would eventually lose the widescreen format war to CinemaScope; because it was non-anamorphic, VistaVision had greater detail around the edges of the frame, and a more even and panel-like sense of space. (Coincidentally, VistaVision was resurrected half a century later for several scenes in a much more serious comics movie, The Dark Knight.) Tashlin directed animated shorts for Warner Bros. before moving on to features, and many of his best movies play like live-action cartoons. Artists And Models, though, looks like paper, inked and colored; its clean lines and bright colors make it the definitive Golden Age comics movie.

Availability: Artists And Models is available on an out-of-print DVD, which can be obtained from Netflix, and to rent or purchase through the major digital services or at your local video store.


Posted by dino martin peters at 7:19 AM

Great trailer! Simply puts a smile on my face & a good mood in my soul! Makes me long for "the good ol' days".

Hey pallie, likes that is simply and truly the Dino-truth...Keeps lovin' our most beloved Dino! btw Dannyo, likes don't knows if you have ever spoken of your fav Martin and Lewis flick...