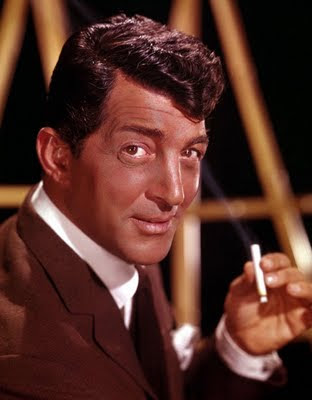 Hey pallies, likes  thanks to the dudes at the Dean Martin Timeline (clicks on tag to goes there) we've been 'lerted to the fact that today is 'nother stunnin' day of rememberance in the life of our most beloved Dino. Likes on this day, 70---count -em-70 years 'go, August 16, in the year of our Dino 1944, our most belove Dino  gots himself a nose job in New York City.

Dino's nose had suffered damage from his days of boxin' as Kid Crochet, and Mr.Lou Costello (of Abbot and Costello fame) generously paid the $500 to get our Dino's nose fixed. In later years Lou's daughter woulda end up tiein' the knot with our Dino's oldest boypallie Craig.

This swank and stunnin' Dino-pix  shows us just how beau-ti-ful our Dino is with his new nose, and likes as we were workin' on this Dino-gram, likes we had hoped to find a "before" Dino-pix as well..and likes the next Dino-post will do exactly that.

We likes just loves bein' able to memorize all these important dates in the life and times of our most beloved Dino! Keeps Dino-studyin' and Dino-lovin' pallies! Dino-devotedly, DMP


Posted by dino martin peters at 7:05 AM

And handsome even then!

Hey pallie, likes Miss AOW, that is indeed the Dino-truth. Keeps lovin' our most beloved Dino!