Dean manages to add a refreshing twist to the standard classic outfit of a blue sport coat and gray trousers.

Hey pallies, likes today we takes you to the male syle icon pad, "BAMF Style - Dress like a man," where likes for the second year in the role the blogger there tagged "luckystrike721" has honored the anniversary of our most beloved Dino's descent to earth with a fabulous fashion post accentin' our great man's great style in the Rat Pack classic flick, "Ocean's Eleven."

This time 'round Mr. Lucky Strike as done an awesome photo and prose essay on "Dean Martin’s Blue Striped Sport Coat in Ocean’s Eleven."   It's one classy column 'bout our most most classy King of Cool.
Truly truly our Dino raised the bar the highest of the high not only for his awesome actin' as Sam Harmon, but for his coolest of cool threads as well.  As Mr. Strike observes, " Dean manages to add a refreshing twist to the standard classic outfit of a blue sport coat and gray trousers."

ilovedinomartin salutes " "luckystrike721" and his swankly stylish blog, "BAMF Style - Dress like a man," for his wondrous words of wisdom homagin' our great great man honorin' "The Day That Coolness Came To Earth."  Likes to checks this out in it's original format, simply clicks on the tag of this here Dino-gram.  Dino-awed, DMP 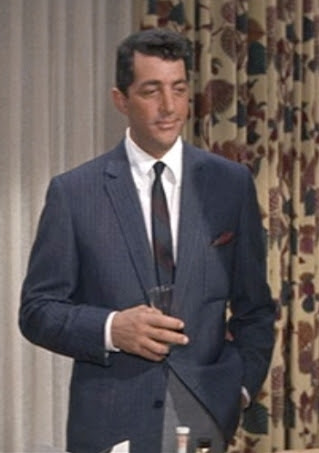 Tomorrow would’ve been the 97th birthday of a true icon from a past era… Dean Martin.

In the film that helped cement the Rat Pack’s place in history, Frank Sinatra and Dean Martin play two old army pals who team up with nine fellow ex-commandos to take down five Las Vegas casinos on New Year’s Eve. Ocean’s Eleven is mostly an excuse for these actors to get together to drink, smoke, chase dames, and sing, but that’s all we really want to see them do anyway.

Dean plays his naturally calm, cool, and collected self in the guise of “Sam Harmon”, a lounge singer who reluctantly joins the plan. Since it is Dean Martin, after all, he wears a black tuxedo for the heist itself, but he spends the majority of the film leisurely taking a drink in a casual sport coat and slacks.

There are right ways and wrong ways to wear a dark blue blazer and slacks. This is Dean’s way, and for a cool day where you want to look simultaneously classy and casual, it’s the best way.

In this scene, heist plotters Danny (Sinatra) and Sam (Dino) are meeting with Duke Santos (Cesar Romero), a suave ex-gangster who plans on brokering a deal between the thieves and the mob-backed casino owners. In his casual sport coat and tie, Dean nicely bridges the very casual cardigan worn by Sinatra and the gray business suit worn by Romero.

Dean’s flannel sport coat in this brief scene is a blue version of the brown striped sport coat worn earlier in the film. They’re exactly the same, right down to the details, the fit, and the tonal stripe, except that this jacket has a blue-gray ground and dark blue tonal stripes.

There are three patch pockets, with two large hip pockets and one breast pocket, accented with a burgundy silk handkerchief that puffs out charmingly lazily over the top.

The sport coat has slim notch lapels and a single-breasted front with a low 2-button stance. Dean buttons only the top button, leaving it fastened while both sitting and standing. It has slightly padded shoulders and hangs nicely on Dino’s athletic frame. There are two short vents in the rear, keeping him cool while wearing a flannel jacket in the desert.

While many men immediately pair khakis or light brown slacks with a dark blue blazer, Dean wears a pair of light gray casual trousers. Some deride the look as too similar to a security guard’s uniform, but Dean’s unique jacket and colorful flairs throughout keep the look refreshing yet classic.

The light gray trousers rise high on his waist and fit generously down to the plain-hemmed bottoms without being baggy. They have slanted side pockets, which Dean’s hands use to great effect in looking cool, and a jetted button-through pocket on the right rear side.

Dean wears one of his usual white button-down shirts. The lightweight material and loose fit keep it voluminous and comfortable in warm weather without bunching up under the jacket. The button-down collars are more appropriate here than when he wears them with a suit or tuxedo since this is a more casual look. The shirt also has a front placket and buttoned cuffs.

The large collars of the shirt provide a noticeable contrast to the small and tight tie knot of Dean’s necktie. The silk tie is very slim with wide burgundy, blue, and forest green stripes in the American direction from the right shoulder down to the left hip. This tie shows up two other times in the film: with a suit for the funeral finale and in a continuity error with the brown sport coat.

Dean also wears his usual accessories in the scene, although barely seen since they’re both on his left hand and his left hand spends the majority of this scene in his pocket. There is a bracelet on his left wrist and a silver ring on his pinky.

Are they comparing bracelets?

Dean is only filmed from the socks up in this scene, so he is either not wearing any shoes or he is wearing the same black leather oxfords that he wears with his gray suit in the finale. Although we don’t see his shoes, we do get a glimpse of his black silk dress socks when he is lounging in the hotel room before Duke’s arrival.

Naturally, the stress of meeting with a gangster after a multi-million dollar casino robbery can only be alleviated with a stiff drink. In this scene, Dean wisely pours himself a glass of Scotch, neat. The Scotch actually appears to be a late 1950s bottle of The Macallan. While Dean was most typically seen indulging in J&B (including in this film!), no man in his right mind would turn down a glass of single malt Macallan.

If you’re going to drink, drink with friends. Especially if those friends are fellow Rat Pack members.
Alright, so you’ve got a cool drink in your hand and you’re relaxing in a Vegas hotel room with your pals… what’s next?

Music, obviously. And what better music would accompany three swingin’ fellas (not in the weird ’70s way with mustaches and robes) than Dean Martin’s 1960 album This Time I’m Swingin’!

This Time I’m Swingin’! was recorded over three sessions at Capitol Studios in Hollywood just after filming had wrapped on Ocean’s Eleven. Dean sports a blue striped flannel sport coat on the album cover that looks exactly like the one worn for this brief scene in the film.

The album is one of Dean’s masterpieces, assisted by the brilliant arrangements and backing orchestra conducted by the legendary Nelson Riddle. The three sessions were recorded in one week in mid-May 1960, with twelve of the thirteen songs being used. The one song cut was “Ain’t That a Kick in the Head”, now iconic due to its use in films like Goodfellas. The song was deemed too racy at the time of its release due to naughty lyrics like:

The room was completely black
I hugged her and she hugged back
Like the sailor said, quote
“Ain’t that a hole in the boat”

…despite the tragic abundance of current songs with lyrics like “pop ‘dat pussay”, which are released these days without a second thought. “Ain’t That a Kick in the Head” is featured in the film when a tuxedo-clad Dean sings and plays piano along with vibraphonist Red Norvo.

I’m sure Dean Martin was swinging long before this album.

Although “Ain’t That a Kick in the Head” didn’t make the final cut when the album was released on October 3, 1960, it still features twelve classic standards from great songwriters of the era like Cole Porter, Sammy Cahn, Jimmy McHugh, Jule Styne, and Jimmy Van Heusen, all infused with Dean’s particular brand of effortless cool:

“I Can’t Believe That You’re in Love with Me”
“True Love”
“You’re Nobody till Somebody Loves You”
“On the Street Where You Live”
“Imagination”
“Until the Real Thing Comes Along”
“Please Don’t Talk About Me When I’m Gone”
“I’ve Grown Accustomed to Her Face”
“Someday (You’ll Want Me to Want You)”
“Mean to Me”
“Heaven Can Wait”
“Just in Time”
The album is perfect for mixing up highballs while entertaining a late night guest or just enjoying a summer cruise in the car with the windows down.

How to Get the Look

Dean manages to add a refreshing twist to the standard classic outfit of a blue sport coat and gray trousers.

Buy the movie. The album This Time I’m Swingin’! is also a must-have for Dean Martin fans.

Share this:
Posted by dino martin peters at 7:07 AM

No matter what our Dino wore, he had CLASS!

It is often said "The clothes make the man." But in our Dino's case, it is "The man makes the clothes"!

Hey pallie, likes so so true Miss AOW...gotta 'fess up that my fav Dino-era for threads was the swingin' seventies....loves our Dino in the mod look of the day! Keeps lovin' our most beloved Dino!

What a great post - thank you once again for your hard work.

I only wish i had sone of the cloths that were worn here - talk about style! It seems most of todays celebrities have no clue what 'Real Style' is!

Hey pallie, likes you Scotty dude, we woulda loves to have some of our Dino's threads...'specially some of our great man's grooviest of groovy seventies mod look. Keeps lovin', keeps postin' our Dino!