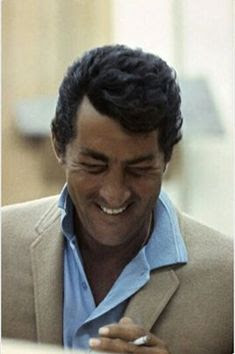 Hey pallies, no foolin' dudes, have we gots a great great Dino-post for all youse Dino-holics on this first day of April 2014.  While searchin' that internet pot of gold,  Youtube, ilovedinomartin happened 'pon a historic live interview that our most beloved Dino did from Hollywood via satellite to down under in the year of our Dino 1983.  Likes we thinks that we probably have posted it here sometime in the past, but this is just so so excellent that we have to share it 'gain.

It is just so so wonderful to see our King of Cool speakin' 'bout his life, times, and teachin's in this very very rare live interview.  The Dino-conversation took place sometime after Dino's trip to London to play gigs at the Apollo Theatre and have a very special 66th  Birthday Bash hosted by Princess Anne.  In addition to sharin' 'bout that, we also hear 'bout his swingin' times with the Rat Pack...as our delightful Dino recalls...."They were the Rats and I was the Pack."

We also learn a bit 'bout how the Matt Helm flicks came 'bout, hear 'bout the recordin' of "The Nashville Sessions" that had just be completed, and how our amazin' man had also planned 'nother recordin' of a country al-b-um that never took place.

And, there's our Dino tellin' his famous joke 'bout the difference between a dog and a fox..."three drinks," some patter 'bout what's in the glass...."ice and some J&B....just booze, news of the makin' of "Cannonball II, and how he used some cassette tapes to personally rehearse his weekly TV show.  The remarkable interview concludes with our beloved Dino croonin' "Everybody loves somebody sometime."

Likes, sits back and spends a quarter of an hour bein' in the live presence of our Dino and bein' wooed and wowed by his wit and wisdom. ilovedinomartin salutes "2packs4sure" for puttin' this up on youtube for Dino-philes everwhere to be absolutely Dino-inspired.   Dino-always, ever, and only, DMP


Posted by dino martin peters at 7:34 AM

Great to see Dean! Always a charming fella & ALWAYS good for a laugh! Dino just had a way 'bout him...seemed like a member of the family. I miss ya pallie!!!

Hey pallie, likes Danny-o, indeed is is always great to see our Dino havin' such fun doin' a candid interview for these masses of his devotees. Thanks for patterin'....and keeps lovin' our most beloved Dino!

As soon as my work week ends, I'll make a point of watching this interview.

I may have seen this interview before. But I can never get enough of our Dino!

Hey pallie, likes Miss AOW, we here at ilovedinomartin salutes your deepest of deep devotion to our most beloved Dino! Keeps spreadin' the Dino-love 'round!

BTW, I have never seen this interview before now. Thanks, DMP!

Hey pallie, likes Miss AOW, likes we are thrilled, but then we knew you would, that you found this Dino-interview so rapturous. Always always gives Dino-philes likes us so so much of a thrill to hear our most beloved Dino speak of his life, times, and teachin's to the masses who hang on his every word. Keeps lovin', keeps followin' our great great man!