Can her beauty be enough to straighten Dino out?

Hey pallies, likes in the days of the gold rush, if you found a bit of glitterly suff in a particular area, there will most likely be more gold to be mined.  So havin' recently had a bit of a  Dino-rush at Mr. Mike Perry's self-tagged blog, "Mike's Take On the Movies ~ Rediscovering Cinema," we decided to try and do a bit of more minin' of Dino-devotion there today.  And, likes of course we were richly richly Dino-rewarded.

What follows in big screen devotee Mike's "take" on "10th starring vehicle together Dean Martin and Jerry Lewis" in "Money From Home."  For whatever reason, this Martin and Lewis big screen effort was one of three Dino and Jerry classics not included in those great Paramount DVD sets of our great man and his great partner.  However, it finally did get released as a single DVD for our Dino-viewin' pleasure.

Mike's review is simple and sincere and we are gratefully glad for his effort 'cause reviews of this particular flick seem few and far between.  And, we are thrilled to be able to feature 'nother pallie deeply deeply devoted to  of our King of Cool.  Recently when we left patter at Mr. Perry's blog of our postin' of his review of "Showdown," Mike respectly replied..... "My pleasure, I have always been a Dino fan. He made everything seem so easy. Love both the music and the films. I always like to tell people that even Frank deep down wanted to be just like Dean. Thanks for sharing my post. Much appreciated."

So, we 'gain salute our Dino-diggin' pallie Mr. Mike Perry for continuin' his efforts of spreadin' his  passion for our Dino at his personal blog...likes hopes we are able to post more and more of Perry's passion for our Dino in the future."  To checks this out in it's original format, simply clicks on the tag of this here Dino-message.  Diggin' for Dino-gold, DMP 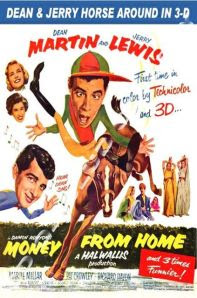 In their 10th starring vehicle together Dean Martin and Jerry Lewis headline this 3D production based on a story from Damon Runyon. Like any Runyon story we get gamblers, gangsters a bit of romance thrown in for good measure with character names like Honeytalk Nelson, Jumbo Schneider and The Seldom Seen Kid.

Martin stars as Honeytalk Nelson who is in over his head with IOU’s to a local mobster played by the one and only Sheldon Leonard. All he has to do to clear up his debt is fix a horse race with the help of his cousin who happens to be an animal loving veterinarian in training played by the other half of the famed comedy duo Jerry Lewis. Songs and romance ensue as things get a little complicated due to the fact that the the horse Martin needs to prevent from winning the big race happens to belong to beautiful Marjie Millar. Can her beauty be enough to straighten Dino out? What do you think? British stalwart Richard Haydn turns up as the would be jockey but as fate would have it the horse just doesn’t cotton to him. It sure likes Jerry though which leaves our bumbling hero as the opportunistic rider. Most of the fun in this entry comes from Jerry doing a British accent as he impersonates Haydn as well as a scene where he lip synches to Dean and various radio programs under Millar’s window.

The feature was produced by Hal Wallis who seemed to have a hand in building many bright stars of the 1950′s and was directed by George Marshall. Marshall was an old hand at these type of films and directed countless features from Glenn Ford and Bob Hope comedies to both Destry films. The 1939 and 1953 versions. He had already done two features with our star duo, Scared Stiff and their debut My Friend Irma before this entry. Photogenic Marjie Millar who plays Dino’s love interest had her career sadly cut short when she suffered a serous injury in a car accident in 1958. Sheldon Leonard went on to a successful career in television productions but could always turn up as a gangland character when he chose to. Also in the cast is long time television actress Pat Crowley and character actor Robert Strauss as The Seldom Seen Kid.
Posted by dino martin peters at 7:41 AM