Hey pallies, likes have we got likes a fabulous Dino-gram to share with all youse Dino-philes this very Dino-day.  While doin' our usual 20 pages of Google Blog searchin' for edifyin' Dino-devotion to share here at our humble little Dino-home, we recently struck perfectly pure Dino-gold with a post from Spaniard Mr. Bernardo de Andres Herreo at his blog "My Dual Turntable."

It is clear that Bernardo loves listenin' to music, and his Dino-accented post, "DEAN MARTIN RAT TEX FAR WEST," speaks volumes of his passion for our Dino's country croonin' sayin' "The other most enduring image is that of DEAN MARTIN COWBOY" and " the man decided to become fearless ITALIAN COUNTRY MUSIC STAR."  Bernardo's post is faithfully filled with  al-b-um covers of our Dino's country recordin's, a baker's dozen of great vid clips of our Dino croonin' country, and powerful poetic prose tyin' it all together.

ilovedinomartin always, always loves to find more and more international Dino-devotion, and these remarkable reflections from the pen of Spaniard  Mr. Bernardo de Andres Herreo give testimony to how much our Dino is loved all 'round the universe, and we finds it 'specially heart-warmin' to have someone from the great great country of Spain create such a massive post filled with deep, pure, and true adulation for our Dino, in particular his country croonin'.

So, likes hats off to our newest pallie Bernardo for spreadin' such massive Dino-devotion at his personal blog, "My Personal Turntable."  Note that at the end of this post we have included Bernardo's words in the original Spanish, and, as usual, to read this it it's original's format, simply clicks on the tag of this here Dino-report.   Dino-awed, DMP 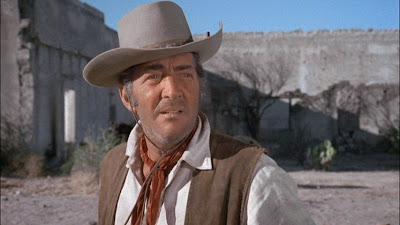 DEAN MARTIN ENTERTAINMENT was an off-road show. As a member of RAT PACK was subjugated to the desires and powers of the head FRANK, Savis If Sammy Jr, was a titan of the stage, a beast of the tables. If Frank Sinatra was, as GREAT, THE VOICE, called him. DEAN Well, it was the role of graciosillo, lush chisposo, that if with salt and grace.

Overshadowed rather prevented by Frank maneuvers, to succeed in the land of the head, and utterly unable to compete in art never well weighted with Sammy Davis Jr, Dean Martin was not a choice but to bring an artistic career, successful without doubt the most varied in a way which seems to lend credence and respect. It was jester, gangster, Italian romeo, jazzman, secondary luxury crooner .... and my favorite image to a pack a cigar and a glass of whiskey in hand (Which American TV of the 50s and 60s with man Lords on camera smoking and drinking like fish without censorship and / or medical Lobby commanded cut emissions).

The other most enduring image is that of DEAN MARTIN COWBOY (4 Texas Bandolero 3 Sergeants and especially Rio Bravo). Both Western had to have his translation to the world of music and the man decided to become fearless ITALIAN COUNTRY MUSIC STAR,  something only after multiple attempts at the end of his life he succeeded. It was in 1983 with an album called NASHVILLE SESSIONS (would be his ULIMO lp) and a single MY FIRST COUNTRY SONG , a version of the theme CONWAY TWITTY it would take to climb the charts of Nashville. Well well well saddled his horse as we go to the musical world of Far West's hand DEAN MARTIN TEX.

I for one do not know a Dean our approach to the world of country music until 1959 when a wise decision but amazing director Howard Hawks trust him to carry out that response to the film High Noon is RIO BRAVO. As in the film a very young Teen Idol Ricky Nelson to which you have to give some musical prominence appears several wonderful country cutting issues, one is introduced MY RIFLE, MY PONY AND ME played by Dean and Ricky becomes classic. Dean realizes that it is possible a reef that way. I will not extend in the film as one of my first post already visited.

Coinciding with the shooting of two of the films that the RAT PACK dedicated to the world of the West, SARGENTS 3 (1963) and 4 FOR TEXAS (1964), Dean is encouraged to record two albums of country music theme. This takes the cowboy TEX DEAN MARTIN name and launch a first country album called way more than obvious COUNTRY STYLE. 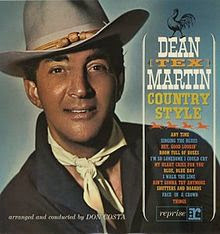 If we analyze the disk that country much truth is there is no. The problem is that the producer chosen, a regular on Dean's career, DON COSTA filled album of lavish string arrangements that hide the compositions of Johnny Cash, Hank Williams, Don Gibson. While Dean goes wrong size experiment quite windy on those that manage to escape the mellifluous arrangements and the real root of the style appears. FACE IN THE CROWD (nothing to do with Tom Petty) very far and Elvis Presley masterful version of the legendary Hank Williams theme 'M SO LONESOME I COULD CRY are the highlights. 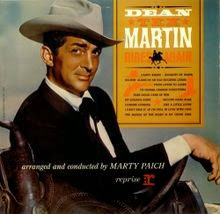 The disc comes fleetingly in the country charts but arouses admiration anywhere. Undeterred, Dean takes the same year a new album RIDES AGAIN under the direction of someone who could be expected to know to get something out of country spirit as was the producer Jimmy Bowen (Nacy Sinatra, Lee Hazlewood and others). Tough luck if the first was sweet this is a country pop flojísimo only salvageable by the version of CORRINA CORRINA shows that with a little common sense would be able to have Dean fortune in country


Although the results were not very satisfactory attempt the truth is that the aftertaste to the sounds of the south never went to him Dean, normally a Southern touch and goes creeping into every job launches even if the subject does not lend for this, a clear example is SEND ME THE PILLOW version of HANK LOCKLIN ( author of the favorite Costello)   num 5 Use the singles charts in 1965. 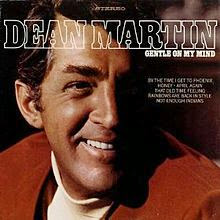 In 1968 we can make a stop at the first of a series of records we can say more adult-oriented pop country world during much of the 70s will preside Dean's career. Music directed by Jimmy Bowen in production but certainly represented by the most interesting in my opinion far from his discography. This album is GENTLE OF MY MIND, title and subject of a disk GLENN CAMPBELL, containing things like the aforementioned song, a version of the classic Jimmy Webb BY THE TIME I GET PHOENIX or APRIL AGAIN Tim Hardin

I TAKE A LOT OF PRIDE IN WHAT I AM (1969) offers us KINGS OF THE ROAD Roger Miller, the title track to the album Merle Haggard (magnified) or CRYING TIME Buck Owens

MY WOMAN MY WOMAN MY WIFE (1970) leaves us antifeminist allegation that Marty Robbins, ONCE A DAY  Bill Anderson, Buck Owens more TOGETHER AGAIN Mell Tillis or your DETROIT CITY a hit by Bobby Bare and Tom Jones. 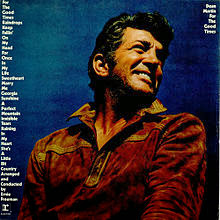 What is clear is that watching the video image of Dean is a true reflection of the albums of  TIE COUNTRY . The next two albums FOR THE GOOD TIMES and DINO 1971 and 1972 are characterized by more compact and use one of my favorite songwriters Kris Kristofferson and the BEE GEES. These are worthwhile if almost full. 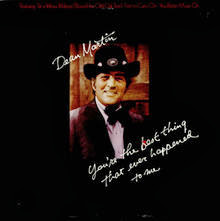 In 1973, after this series of country albums as already referred to bow a disc appears 'RE THE BEST THING THAT EVER HAPPENED TO ME, where Dean in the twilight of his career, Sinatra faced and despised, in divorce proceedings, finalizing their TV program and then hung Whiskey logical records with that way of life and mood, again, not as a Master drive country but the cover might seem otherwise.

Just for the song that gives title created by Jim Weatherly RAY PRICE success and unsurpassed version of Gladys Knights and the Pips included in this jewel of music is the IMAGINATION disk I agenciarselo worth.

This YOU BETTER MOVE ON, also included Arthur Alexander sure raising a smile to Willy De Ville Darkside top

In 1974 recorded a new album ONCE A WHILE he does not see the light until 1978. Their activities rest, barring any appearance in casinos, so far in 1983 we started this post and his posthumous NASHVILLE SESSIONS  where an exhausted Dean gives his last breath musical hand Merle Haggard and Conway Twitty, never to return,

It has always been associated with Italian versions Dean, crooner with the world, because this is another way to see his legacy, probably one of the types of issues that a lavished throughout his career. Granted it's hard to recommend a full artist album but if there is a compilation of Dean and includes any of the songs I mentioned then that is good and one will enjoy.


YOUR PHARMACIST WARNING: THIS POST TO BE ENJOYED WITH A CIGAR AND WHISKEY ON HAND for better understanding.

More MORE Thanks fot your words. Excuse me my english . muchisimas gracias por todo . Thanks Thanks from Spain

Hey pallie, likes thanks ever so much for your words of appreciato Bernardo. Know that the pleasure of sharin' your Dino-devotion is all ours. Keeps lovin' our most beloved Dino!