Hey pallies, likes searchin' the ol' web for Dino-homagin' certainly can lead to some very very cool sites...and why not 'cause our Dino always was, is, and always will be the coolest master 'round. So today we turn to the man's man style blog, "BAMF Style - Dress Like A Man,' where a fella who tags himself, "luckystrike721" shares a New Year's Eve post tagged "Dino Celebrates New Year's Eve."

Likes this fine reflection on our Dino puts the accent on our most beloved Dino playin' the character of Sam Harmon from the original 1960 flick, "Ocean's 11." And, Mr. "luckystrike721" has hit paydirt with his marvelous mixture of Dino-prose and Dino-pixs a la "Ocean's 11." Likes pallies this reviewer dude simply goes to the max in describin' our Dino's tux and accessories...includin' his pinky ring and silver chain bracelet...likes never ever heard our Dino's duds described with such ultra coolness dudes!

ilovedinomartin offers our finest kudos to Mr. "luckystike721" for such a fine review of our Dino's "Ocean's 11 fabulous style. And, kudos to the swingin' make fashion pad "BAMF Style - Dress Like A Man" for sharin' this stunnin' Dino-reflection with their readership....sure to help many of today's style dudes comes to deep, pure, and true Dino-devotion. To likes checks this out in it's original format, simply clicks on the tag of this here Dino-report. Dino-centric, DMP

Dean Martin in a black tux. If you don’t emulate this look for New Year’s Eve, you’re doing it wrong. 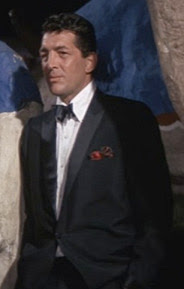 Dean Martin as Sam Harmon in the original 1960 Ocean’s Eleven.

However, Pitt knew to stay away from the territory Dean Martin was known for: his tuxedos.

(And singing. Luckily, the sountrack for the 2001 version of Ocean’s Eleven didn’t feature a single track of Brad Pitt singing.)

Dean Martin didn’t wear a tuxedo to look “cool”, that was merely the after-effect. Dean wore his tux as though it was just something he had to do, so – as long as he was doing it – he may as well be comfortable.

The film’s tuxedo didn’t deviate far from Martin’s usual stage or TV show look: a black suit with a comfortable shirt and a pocketsquare.

The ventless dinner jacket is single-breasted, closing with one button in the front. The 3-button cuffs, front button, and slim peak lapels are all satin-faced. In addition, an inch-long gauntlet on each cuff is faced in black satin. The breast pocket houses a red paisley pocketsquare. There are also jetted hip pockets on each side.

Martin’s pants are standard men’s formal trousers with a satin side stripe down each leg.

Dean Martin at a slot machine makes it look far better than the 70-year-old woman in a torn T-shirt with a wolf printed on it. Oh, old Vegas… The shirt is what differentiates this tuxedo from what is standard. In the film, and several documented photos and footage from his other shows, Martin wears a typical American casual white button-down shirt with button-down collars.

Typically, this is not done. It is considered a sloppy look. While I wouldn’t recommend it, I will also go on the record and say that it works for Dean Martin. Why?

Dean Martin was an ex-boxer from the small town of Steubenville, Ohio. He was ridiculed by his peers and worked odd jobs ranging from working in a steel mill to dealing blackjack in an illegal casino to delivering bootleg whiskey. Of the main members of the Rat Pack, he was the most humble; he didn’t dress to show off, he dressed to be comfortable while entertaining.

Seriously, does anyone think he isn’t cool?

The casual white button-down isn’t a recommended look for black tie, but, looking at the images of Dean in his tux, can you say that he doesn’t look cool? If anything, the shirt is just one more part of Dean’s personal expression, throwing convention to the wind and doing what makes him comfortable. Why not, in his case?

Like most button-down collar shirts, it also has a front placket and buttoned barrel cuffs.

Dean completes his look with a large butterfly-shaped black satin bowtie. On his feet are black leather laced shoes over thin black dress socks. Dean wears his accessories, a silver pinky ring and a silver chain bracelet, on his left hand.

Dean knows the right way to do Vegas.

Dean Martin certainly loved women. Luckily for him, he attracted them in hordes. Luckily for his wife, he was the most loyal member of the central Rat Packers: Sinatra, Martin, and Sammy Davis, Jr. Unfortunately, this isn’t saying much as Martin still engaged in several affairs, but not nearly to the extent or the debauchery of Frank or especially Sammy.

Dean Martin is presented with his options for the evening.

The best way to emulate Martin for New Year’s would be to put on a sharp but comfortable tux, have a lovely young lady on your arm and treat her respectably, light up a Lucky, knock back a few highballs or martinis before switching to champagne, and assist in the robbery of five Vegas casinos at midnight.

And don’t forget to sing! While everyone else is doing “Auld Lang Syne”, there’s nothing wrong with “Ain’t That a Kick in the Head”:

How to Get the Look

Dean Martin adopted his own atypical black tie look. If you feel you can pull off your own individual style, go for it! Maybe wear a comfortable shirt or a fun pocketsquare, just don’t wear white socks and/or tennis shoes. No matter who you are, that looks stupid.

• black formal trousers with a satin side stripe down each leg

•silver pinky ring (on left pinky) Do Yourself A Favor And…

Tipsy Girl: Hey, gimme a little kiss, how about it, huh?

Very cool! No one pulls it off like Dean!

Hey pallie, likes Danny-o, just knew you woulda digs this Dino-post to the max 'cause likes I know you are so so desirous to emulate our Dino as THE style icon!
Keeps lovin' our Dino!