Hey pallies, likes man-o-man dudes has ilovedinomartin gots outstandin' stunnin'ly stellar Dino-news for all you Dino-philes. THIS SUNDAY is gonna be likes EXTRA EXTRA SPECIAL in the Dino-world 'cause at 3:00 p.m. public radio station WCNY FM 91.3 of Syracuse, New York (online at www.wcny.org/radio) is gonna have likes the most special of special Dino-programmes!

This breakin' Dino-news has been shared on WCNY's blog by Miss Joey Nigro-Nilsen, who along with Jim Battaglia, host the weekly Italian musicale programme CIAO at this PBS radio station. Accordin' to Miss Nigro-Nilsen, on Sunday they'll be "talking about Dean Martin’s image and appeal to generations born after his time along with selections from his recorded library of songs to punctuate our thoughts."

Now, likes how cool is that?!?!?!....this is one Dino-homagin' that likes Dino-holics everywhere are gonna want to make every every Dino-effort to catch. Thanks goodness for the programme bein' streamin' on the 'net for all us Dino-addicts that can't tune into the WCNY radio station.

Kudos, kudos, and more kudos to all the pallies at WCHY FM, 'specially Miss Joey Nigro-Nilsen and Mr. Jim Battaglia for puttin' the accent on our Dino in this wonderful way...certainly grand to know these folks are Dino-wise to know how hugely Dino-devotion continues to grow Dino-year in, Dino-year out! To checks this out in it's original format, simply clicks on the tag of this Dino-gram. Dinopsyced, DMP 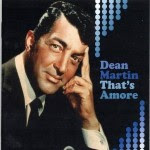 On CIAO! Sunday we’re talking about Dean Martin’s image and appeal to generations born after his time along with selections from his recorded library of songs to punctuate our thoughts.

When Dean Martin and Jerry Lewis went their separate ways all bets were that the seemingly light weight Martin would fade away… and certainly when they sang the infectious “That’s Amore” in the film, “The Caddy” in 1953, neither one would have suspected that the song would only gain in popularity over the years…AND that it would be Martin’s voice and persona that would live on far beyond his seemingly charmed life here on earth. (Note: In the film Jerry Lewis sings characteristically silly lyrics between Martin’s singing like “If you still kiss your girl after garlic and oil, that’s amore?).

Dean Martin, they say, has said that the two biggest turning points in his career were “meeting Jerry Lewis” and “leaving Jerry Lewis.” The “straight man” to the driven and manic Lewis, Dean Martin had already been singing with the Sammy Watkins Orchestra in Cleveland and on radio in the early 1940s before he and his wife of two years left Cleveland for New York City where his destiny awaited.

Martin and Lewis began their nightclub and motion picture partnership when they started clowning around in each other’s acts when both were booked at the same nightclub. Actually, it’s said that Jerry Lewis was so dazzled by the handsome and charismatic Martin that to get his attention he burst onstage with a prank during Martin’s singing act. Martin, to his credit, didn’t get angry and played along. This is undoubtedly where he settled into his poised, cool and smooth persona.

A few months later they were in Atlantic City with an “act.” In an interview with writer Pete Martin, Martin said “We’d do anything that came to our minds, anything at all…it was wonderful.” That was 1945 and they became one of America’s favorite acts. But ten years later after 16 films and endless appearances together they weren’t even on speaking terms. They played their last show together in July 1956 at the famed Copacabana. The reasons are as complex as the two men but understandable in the fast and unpredictable world of show biz.

But let’s go back much earlier in time. Dean Martin was born Dino Paul Crocetti on June 17, 1917, in Steubenville, Ohio to Italian American Angela Barra and Gaetano Crocetti an Italian immigrant barber from a mountainous province in Abruzzo. Nothing in his youth would give any hint of the wildly successful career and lasting fame that would be his destiny. He spoke only Italian until he was 5 years old and quit school at 16 taking jobs delivering bootleg liquor, working as a speakeasy croupier and blackjack dealer, a steel mill worker and as the welterweight boxer. Yes, he got knocked round a bit and eventually had a nose job in the 1940s to restore his ruggedly chiseled profile. But during those years he had gotten to know club owners from his work around town leading to the beginning of his singing career. Though he changed his name he was never afraid to sing in his native tongue, Italian. (clip of “Luna Mezzo Mare” in perfect dialect).

His success in stage, screen and song is well chronicled…he conquered radio, TV, films, nightclubs, comedy…have I left anything out?!

One thing that is known about Dean Martin is that he deliberately and masterfully didn’t take himself too seriously unlike Sinatra whose favorite toast was “I hope you live to be 100 and may the last voice you hear be mine.” This may have been his “secret” . Though he made it look easy, it’s said that prided himself on memorizing whole scripts, not just his own parts. He didn’t like to rehearse because he felt his best performance was his first!

His impish grin, warm voice and cool exterior has drawn fans from several generations, even after his death. His presence is everywhere in the world wide web, attracting generations of young men who want some of what he had…COOOOOL!!!!!!!!!!!!!!!! (♫ clip of “Little Ole Wine Drinker Me).

His voice is easily recognizable and when you hear it, you want to take a deep breath, relax…and maybe have a glass of wine? Well, he did have a “wine, women and song” reputation, but when asked about that in one interview, he paused a moment before responding and characteristically quietly and nonchalantly said, “Hmmp…women and song…I’m not too crazy about wine…what else is there to say about me?…I love to sing…and I love women.”

Dean Martin died on Christmas Day, 1995 but not without first experiencing his share of deep sadness and tragedy. He was married three times fathering eight children. His son Dean Paul was killed in an air crash in 1987. This tragedy was made even more painful because his remains were never found…and Dean Martin began to withdraw from the glitter and glamour of the world he had owned for decades.

This jazz standard written in the 1930s and recreated by many, smoothly sung by Frank Sinatra, achingly sad by Jo Stafford, romantically by the British chanteuse Vera Lynn but never so beguilingly certain as Dean Martin. (Dean Martin’s “I’ll Be Seeing You”).

As always, CIAO! is where you can celebrate the Italian in YOU! Join us every Sunday afternoon at 3:00 WCNY FM 91.3 on your dial with me, Joey Nigro and my co-host Jim Battaglia (or online at www.wcny.org/radio). Italians love to say, “Canta che ti passa!” “Sing that it will pass!” so we always feature great music…a mix of old and new songs by our Italian American artists and Italian singers and composers…music that will lift your spirits…and music that you won’t hear anywhere else!

Topics you will hear in future CIAO! programs range from the culture, beauty and history of Italy and the regions where Italian American families claim their roots; stories of immigration and assimilation, sometimes heartbreaking, sometimes humorous…but always heartwarming; memories of the old neighborhoods; entertaining pieces on noteworthy Italians Americans and interviews with celebrities or ordinary Italian Americans with a story to tell.

His voice is easily recognizable...

One key to our Dino's success!

Even the best Dino imitators fall far short of the real deal!

Hey pallie, likes indeed Miss AOW...this Miss Joey has captured so so much Dino-truth in her Dino-prose. Keeps lovin' our Dino!