Benny began life in my head as a needy little man, obsessed with Dean Martin to the point of filling his house (and emptying his inheritance) with Dino memorabilia that he bought on eBay. 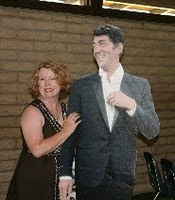 Hey pallies, likes gotta 'fess up to youse and our great Dino-writin' pallie Miss Gayle Carline, that with all the excitement of preparin' for Dino-winter-day, I completely forgot to order my copy of her new Dino-tome, "The Hot Mess." Faithful readers of ilovedinomartin know that Miss Gayle is the scriber of the Peri Minneopa Mysteries which feature that Dino-addicted character of characters Mr. Benny Needles."

Well our Miss Gayle released her third volume near Dino-winter-day in both e-book and paperback editions. Today ilovedinomartin takes you to the murder and mayhem blog, "writers who kill," and their "Salad Bowl Saturday" feature that wonderfully puts the accent on our Miss Gayle Carline and her new murder mystery, "The Hot Mess."

As you will note we are bein' treated to a bit of patter directly from our Miss Gayle and then a delightful excerpt that of course features our most beloved Benny Needles. Well, likes I gotta tell you pallies, I need no more reminder then this to goes directly to a local bookstore and put my order in for our Miss Gayle Carline's newest Dino-read.

Hats off to the pallies at "writers who kill" for featurin' our great Dino-pallie Miss Gayle Carline in this grand way...for offerin' my that Dino-nudge to gets this tome for my very own. To checks this out in it's original format, simply clicks on the tag of this here Dino-report. Dino-always, ever, and only, DMP

After the holiday hiatus, Salad Bowl Saturdays are back. Today we welcome Gayle Carline, whose most recent book is The Hot Mess. You can view the trailer here.

First of all, I want to thank the gang at Writers Who Kill for giving me a little blog love today. In the cyber-world, you can’t have too many friends. Actually, that’s true in the real world, too, but it’s a lot of Christmas cards to send out.

I’ve been uber-excited to see my third Peri Minneopa Mystery hit the shelves (ebook and paperback). In The Hot Mess, Peri investigates a house fire at Benny Needles’ home. Benny showed up as her client in Freezer Burn. I thought he was just a guest star. Turns out he’s a series regular.

Benny began life in my head as a needy little man, obsessed with Dean Martin to the point of filling his house (and emptying his inheritance) with Dino memorabilia that he bought on eBay. Peri and I found him annoying. Readers loved him and begged for him to return.

Over the next two books, I realized that he has Asperger’s Syndrome, which is on the autism spectrum. As a writer, I had to push his limits, even if as a person I want to protect him. So I set fire to his house after a bunch of teenage boys break in for a late night party. Sadly, one of the boys is found in the ashes.

Then I let Peri step in and pick up the pieces. Not only does she have to fight the authorities to prove the fire was arson, but along the way there are family secrets to discover and family problems to overcome. As usual, she has her boyfriend, Detective Skip Carlton, to lean on, as well as her BFF, Assistant Coroner Blanche Debussy.

To make it all harder for her, Benny is acting as her assistant. He is inept with a side of well-meaning. It’s a fun story with a little for everyone—humor, poignancy, and even romance.

Some of my readers have remarked that they think The Hot Mess is my best book ever. Like I said, readers rule.

Benny scampered up to Peri, a wrinkled brown bag in his hand. He held it out to her, looked at it, and took it back. He spent several seconds smoothing the wrinkles as best he could, then handed it to her at last.

“Thank you,” Peri told him, and reached inside. It was a Dean Martin bobblehead doll, his body bouncing as she held onto his oversized head.

“Do you like it? I figure you can put it on your dashboard. Or maybe on that shelf where the blue moose was.”

The blue ceramic moose had been knocked from her curio shelf by Matt Helm while she was providing a foster home for him. Benny had been caring for the cat, and suggested several times that she needed more Dino stuff in her house. She guessed her gift was his attempt at starting the trend.

He rolled his eyes. “To find out what happened to my house. Somebody must’ve killed that guy and tried to burn my house down to hide the body.” She looked up at Skip, who kissed the top of her head. “I got what I needed. You’re on your own.”

“Oh, I don’t know,” she said, watching the detective walk to his car and thinking, coward. “The fire chief says—”

“The fire chief is wrong.” He cut her off. “I never bought a can of paint in my life, and I never put anything next to wires or outlets or the stove or matches or, or, or anything hot. My mom taught me better. I may have a lot of stuff in my house, but I know the rules. Somebody set the fire. And you can find out who.”

“Oh, I don’t know.” Peri repeated herself, in an attempt to consider what he was saying. “I’m not a fire investigator.”

“But you will talk to the investigator, just like you talk to the police officers and figure things out. I can help you, too, like I did before.” “You’re finished with your co

mmunity service hours, and I can’t afford to hire you.” “Why not? In jail, we found out minimum wage is eight dollars an hour. Charge me eight dollars more than your regular fee, then when I pay you, you pay me my eight dollars.”

“While mathematically correct, it sounds a little crazy,” Peri said. Phil agreed. “Sounds like you’re paying to work for her.”

“But I have plenty of money,” Benny told them. “And when the insurance pays me, I’ll have even more money.”

Peri saw his hands massaging the ashtray. They worked together, kneading his stress into the glass. Here was a guy who could make it through life as long as there weren’t any problems, but problems wouldn’t leave him alone. She felt her heart soften. “Okay, Ben, I’ll at least look into everything. But you don’t have to help me.”

“Oh, thank you. If you need my help, ask me.” Benny turned back to the Mercedes, where Phil was helping Nancy into the front seat.

“And Benny…” Peri wanted to remind him the insurance money was to pay for fixing the house, not buying more Dean Martin posters. She watched him turn back to her, his face down. He was looking at his ashtray.

“I’ll call you when I know something.” She couldn’t bear to force him into more reality. Not today.

Peri watched Benny hop in behind Phil. The older gentleman said something over his shoulder, and she saw Benny’s head bobbing in agreement, while his body made the motions of stretching a seatbelt across his lap.

Walking to her own car, she thought about Benny’s request. Fire investigations were not even on her menu of services. Still, she could use the money, she wanted to help Benny, and she was curious. Arson to cover the murder made no sense at all, since the fire was in one room and the body was in another. What had happened in Benny’s house that night?

She got into the driver’s seat, adjusted the steering wheel and set Dino the Bobblehead on her dash. Flicking his head once made it bounce in a perky, if chaotic, rhythm.

Posted by dino martin peters at 9:02 AM

Thank you so much for the shout-out, Mr. Peters. I had so much fun with The Hot Mess and with Benny's love for Dean Martin. He and Peri will be back again, trust me.

Hey pallies, likes Miss Gayle Carline, it is indeed my supreme pleasure to show you a bit of true Dinopalliedom...I ought to have my very own copy of "The Hot Mess" in a few days...keeps lovin' our Benny as he keeps lovin' our Dino