Dean Martin a person who will be remembered!

Hey pallies, likes the cool dudes at google 'lerts have 'gain helped ilovedinomartin stumble 'pon 'nother new blog offerin' devotion to our Dino. In only it's second post outta the shoot, the blog tagged "popularsongsandmusic," by blogger "mrjones2" shares such pure and passionate Dino-truth in his amore to our Dino, "Dean Martin a person who will be remembered!"

The Dino-prose below contains many many of the standard Dino-references that have often been spread over the pages of ilovedinomartin, so not sure there is anythin' new to those of us who proudly proclaim ourselves as Dino-holics...but mostly sharin' it 'cause the tone of the Dino-scribin' is brimmin' full of devotion to our one and only most beloved Dino! Likes always so refreshin' to find 'nother pallie speakin' so so lovin'ly of our King of Cool!

And, likes pallies, the dude who scribed these Dino-reflections is also pointin' the way to 'nother cool Dino-site tagged, "Dean Martin Songs," (http://www.deanmartinmusic.net) which offers a vast selection of Dino-croons. ilovedinomartin sents kudos to "mrjones2" for puttin' the accent on our Dino and speakin' such Dino-truth 'bout how our great man will always be greatly remembered. To checks this out in it's original format, simply clicks on the tag of these Dino-words. Dino-delightedly, DMP 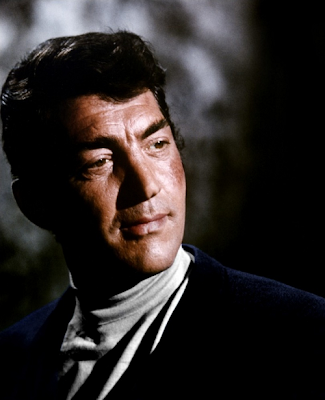 Dean Martin a person who will be remembered!

Dean Martin began his show business career at age seventeen, singing in Ohio nightclubs near his hometown. During a stint with the Ernie McKay band, he was noticed by Cleveland bandleader Sammy Watkins, who hired him as the band’s featured vocalist. He began touring with Watkins in 1938, and in 1940, changed his name to Dean Martin. In September 1943, Martin signed an exclusive contract with MCA to sing at the Riobamba Room in New York, and in 1944 he was given his own fifteen-minute radio program broadcasting from New York City, Songs by Dean Martin. In 1946 he signed a contract and recorded four songs with Diamond Records.

During a club engagement in 1946, Martin met Jerry Lewis and the two began joking around with each other during their respective acts. They teamed up in 1947, with Martin playing the straight man to Lewis’s clown. NBC broadcast a regular thirty-minute radio program featuring the pair in 1949, and they made their television debut in the Colgate Comedy Hour in 1950. The immensely popular Martin and Lewis team made sixteen films together between 1949 and 1956.

Martin and Lewis last performed together at the Copacabana in New York, on July 24, 1956. After ten years as a team, they split up due to creative differences. Martin struck out on his own and resumed his singing career, recording such Dean Martin Songs for Capitol as “That’s Amore,” “Memories are Made of This,” “When You’re Smiling,” and “Oh Marie.” He also resumed acting in films, and in 1958, Martin received critical acclaim after appearing with Montgomery Clift andMarlon Brando in The Young Lions. In 1962, Martin left Capitol Records and signed with Reprise. All the Dean Martin music is absolutely marvelous and now you can listen to his best songs free.

In 1964, he recorded his blockbuster hit, “Everybody Loves Somebody,” which beat the Beatles to become the No. 1 hit in America for one week. It became the theme song for his television variety series, The Dean Martin Show, which ran on NBC for eight years starting in 1965. Martin followed this with The Dean Martin Comedy Hour, which ran from 1973 to 1974. An indelible part of Martin’s television “schtick” was his comedic portrayal of life as an alcoholic lush, which many people never realized was just an act. Nevertheless he was a great singer of all time and nowadays all his great tracks are able to download.

Martin suffered a tragic loss when his son, Dino Jr., was killed in a plane crash during a military training exercise in 1987. He retired from show business after a 1988-89 concert tour with fellow rat-packers Sammy Davis, Jr. and Frank Sinatra, which ended for Martin after he became ill and was replaced by Liza Minelli for the remainder of the tour. Martin died of acute respiratory failure in Beverly Hills on December 25, 1995. But Dean Marin Music will always be in our hearts.

Posted by dino martin peters at 8:56 AM