Hey pallies, likes on this day when we remember the beginnin's of the greatest comedic duo of all time, Martin and Lewis, the pallies at "LIFE.com" have put together a simply stunnin' set of pixs---most never published by LIFE before---from a series of shows at New York’s Copacabana club in 1949.

And, as if these new pixs were not 'nough there is some stellar prosin' as well homagin' the totally totally uniquely unparralled partership that took the world by storm. Youse are simply goin' wanna speak some quality time with this deeply devotional presentation by the pallies at LIFE.com.

ilovedinomartin is deeply appreciate to the folks at LIFE.com for puttin' such grand efforts into honorin' the beginnin' and the endin' of our Dino and Jerry's grand partnership. To view all 14-count-'em-14 pixs, simply clicks on the tag of this here Dino-gram to visit the original LIFE site. Dino-always, ever, and only, DMP 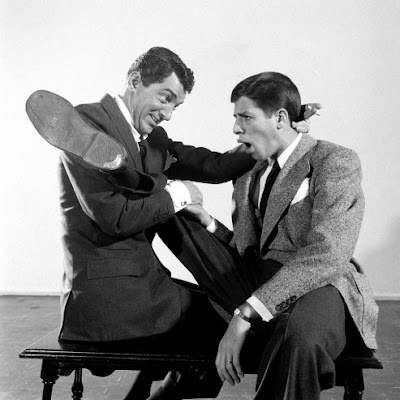 There’s a storied tradition in show business that involves two seemingly incompatible but ultimately inextricable buddies — it’s almost always two men, by the way — who turn out to be far more entertaining when they’re together than when they’re apart. Laurel and Hardy, Abbot and Costello, Hope and Crosby, Penn and Teller, Gibson and Glover (for those who enjoy Gibson’s stock, “unpredictable crazy guy” characterizations) and on and on. At the risk of oversimplifying the ineffable chemistry that makes stars of some folks and also-rans of so many others, the dynamic driving these unlikely partnerships can be roughly represented as “straight man and clown,” with laughs arising, in large part, from the obvious friction between the near-lunacy (or idiocy) of the latter and the long-suffering patience of the former. 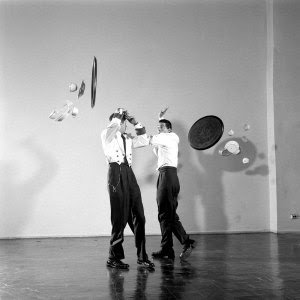 But no mismatched duo in showbiz history so reliably or profitably convulsed eager-to-roar audiences as Dean Martin and Jerry Lewis in the middle part of the 20th century. For ten years (in fact, for almost exactly ten years, from July 25, 1946, to late July 1956), Martin and Lewis performed their manic magic on nightclub stages, the radio, television and the silver screen.

Here, on the anniversary of both their debut as an utterly singular comedy team and their acrimonious split ten years later, LIFE.com offers a series of photos — most of which never ran in LIFE magazine — of the berserk superstars at their most frantic, during a series of shows at New York’s Copacabana club in 1949.

With Martin playing his suave but jokey singer role to perfection and Lewis acting like a cross between a vaudevillian chimpanzee and a sugar-addled 8-year-old, the pair positively owned the entertainment world for the better part of a decade. In the early 1950s, especially, the two were nothing less than the most popular showbiz act in America, selling out theaters and legendary nightclubs, making hit movies and guest-starring on countless TV variety shows. They worked nonstop, with an act that drew much of its energy and its appeal from the fact that the two were very, very close friends. (They would famously fall out after the cat broke up in 1956, and even more famously reconcile in later years, before Martin died in the mid-1990s.)

As LIFE told its readers in an August 1951 issue:

During a personal appearance tour to promote their newest movie, That’s My Boy, the young comedy team of Martin and Lewis made history inside and outside theaters in new York, Detroit and Chicago. The tour began at New York’s paramount Theater, where the comedians were guaranteed $50,000 a week plus 50% of the the theater’s profit over $100,000. This meant that rapid audience turnover was the key to a big take, but after their first show few patrons budged from their seats. Lewis finally got the happy fans out of the theater by advising them that the next performance (free) would be presented from the dressing-room window.

From that time on the comedians put on short alfresco acts after each stage show, and the ruse worked so well — jamming traffic but emptying and refilling the house — that they repeated it, sometimes in windows, sometimes on fire escapes, everywhere they went. Indoors or out, the kind of bedlam that distinguished their tour was wilder than anything provoked by Bob Hope at his zaniest or Frank Sinatra at his swooniest. Clowning outrageously, throwing themselves and their clothes about with maniacal energy, they broke up their audiences, broke all attendance records and nearly broke themselves down.

After four weeks Martin and Lewis had earned $260,000 in the theaters, establishing them as the highest paid act in show business… The comedians, who have been together five frantic years, already are planning more movies, more TV shows and more nightclub appearances. Asked why they bother when their income (the 1951 gross should reach $1.5 million) will go mostly for taxes), Lewis replies, “The government needs tanks.”

Hi Pal:
Sorry for putting this here but I thought I'd pass this little blog on. Kinda interesting.

Hey pallie, likes nothin' to be sorry 'bout man...Jeremey of that blog pad is a true knower and lover of our Dino and ilovedinomartin is certainly gonna wants to share this with our readership in the near future. Thanks ever so much dude for likes puttin' us on to this outstandin' Dino-reflection. Keeps lovin' our Dino!