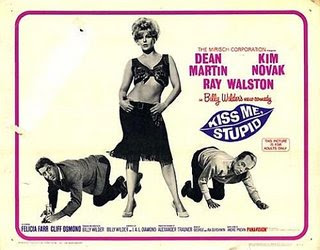 Hey pallies, likes I dares say, likes coulda it be that a "Kiss Me Stupid" revival is in the makin'?!?!? Likes after I posted a review of KMS by Miss Mandi on Saturday, I almost immediately came 'cross 'nother one at the self-tagged blog "Gillian's Reviews," and likes just have to shares it with all youse Dino-devotees.

Gillian likes most reviewers of KMS speaks the Dino-truth by sayin'.."and Dean Martin is great." Indeed our Dino playin' is ol' so cool, hip, and ever randy self is GREAT and certainly the best part of this classic Dino-flick. So enjoys yet 'nother Dino-perspective on this oh so evocative as well as oh so provocative big sceen Dino-event.

Thanks to Gillian for puttin' her readership on to this Dino-caper and helpin' 'em to grow in their Dino-devotion. As usual, to view this in it's original format, just clicks on the tag of this here Dino-gram. Dino-always, ever, and only, DMP

a Billy Wilder movie with Dean Martin, what could go wrong?

A boozy, sex-obsessed singer, Dino (Martin), is traveling from Las Vegas to Los Angeles where he is to film a television special. He is forced to make a detour through a small town in Nevada called Climax. Climax is home to two aspiring songwriters, gas station attendant Barney Millsap (Cliff Osmond) and piano teacher Orville J. Spooner (Ray Walston). They conspire to get Dino to stay in town overnight so he can hear their songs and buy them. They hire a local prostitute, Polly the Pistol (Kim Novak) to pretend to be Orville’s wife and sleep with Dino.

I was warned by Robert Osbourne prior to watching that this was considered Wilder’s least successful film and that everyone hated it. It was just pretty stupid. I liked Martin best and the beginning of the movie with his variety show was great. And then it went down in quality. Orville was very suspicious of his wife Zelda (Felicia Farr) and that’s why he wound up hiring a woman to play his wife: so Zelda wouldn’t sleep with Dino. Movie logic! And I really did not like Novak as Polly. According to Osbourne, Marilyn Monroe was supposed to play her but died before production started. It seemed to me like Novak was playing Monroe playing Polly. (Peter Sellers was supposed to play Orville but dropped out after suffering a number of heart attacks. I already didn’t like Orville and Sellers might have pushed me over the edge) So there’s a few laughs, it was risque at the time but nothing too crazy nowadays, and Dean Martin is great. Oh, and there’s some nice Gershwin songs.
Posted by dino martin peters at 2:58 PM

Hey pallie, indeed Deanager Levi, our Dino is "cool and funny"...always loves to see our most beloved Dino does what he does best...play himself to the max. Thanks ever so much dude for droppin' by and sharin' some patter with us. Keeps lovin' our Dino!