Hey pallies, likes it is so so intriguin' how particular Dino-topics sometimes likes appears in bunchs on the web. Recently ilovedinomartin posted two reviews of our most beloved Dino's provocative performance in Billy Wilder's "Kiss Me Stupid" one right after the other, and now today we feature 'nother blogger's evocative efforts on this same Dino-classic.

From the cinema blog, "cranes are flying" blogger Robert Kennedy from Evanston, Illinois, has scribed a revealin' review of KMS....indeed perhaps the best review that ilovedinomartin has ever posted here. Kennedy shares several very very thoughtful thin's 'bout how and why this before-it's-time Dino-flick was largely rejected when it played on the big screen.

Likes I never made the connection before 'bout the timin' of this film's release. Kennedy shares that "this film was released just a month after the JFK Kennedy assassination" and that KMS was "dismissed as too lewd and crude by most critics over the Christmas holiday release." Those two realities alone helps put into clear Dino-perspective why KMS had such a hard time findin' an audience.

And, Mr. Kennedy has many more excellent thoughts that he shares with us includin' his brillant framin' of our Dino's role sayin'..."brilliantly using a spoof on Dean Martin as a Rat Pack swinger. Likes I coulda goes on and on 'bout this dude's devotion to KMS, but wants to leaves the pleasure of readin' his review for all you Dino-philes!

Kudos to Mr. Robert Kennedy for puttin' his cinema blog readership onto our Dino's most provocative performance. To view this in it's original format, likes just clicks on the tag of these Dino-thoughts. Dino-always, ever, and only, DMP 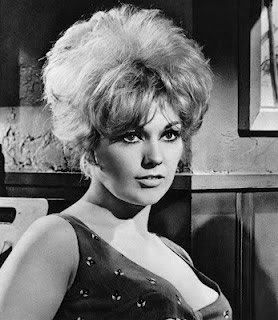 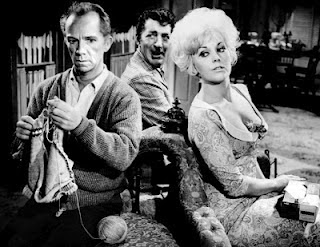 
Utter tastelessness was never funnier, where this film opens with Dean Martin at the Sands Resort doing his closing night shtick at Las Vegas, singing “S’Wonderful” in between statuesque showgirls and a host of bad jokes, which, if truth be told, are the mainstay of comedy. How else could the nation survive Beverly Hillbillies, Petticoat Junction, The Andy Griffith Show, My Favorite Martian, The Munsters, Gilligan's Island, or Flipper, all among the most watched TV shows of the era when this film was made. Nonetheless, the film was condemned by the Catholic Legion of Decency (perhaps the biggest joke of all, especially looking back from the present era where the Catholic Church is embroiled in their own *indecent* sex scandal, covering up decades of sexual abuse by Catholic priests, effectively eliminating any new order of priests coming out of the United States) and dismissed as too lewd and crude by most critics over the Christmas holiday release. While adultery could be tolerated by the public in The Apartment (1961), winner of 5 Academy Awards, including Best Screenplay, Best Director, and Best Picture largely because the immoral offender was portrayed as such a sleazeball, it’s harder to justify adultery from a happily married couple in small town America, even if that’s part of the joke, as the film is really a bedroom farce about fidelity in love and marriage. In comedy timing is everything, and this film was released just a month after the JFK Kennedy assassination, with a nation obsessed and still reeling from the larger implications of what happened, who’s behind it, and who’s running the country? As a result, this film tends to get lost in the Billy Wilder pantheon of great movies, though it has to be one of his funniest films, where the double and triple entendre quality of the jokes ranks with the Marx Brothers. Wilder's film treats vulgarity with the same in-your-face brashness as One, Two, Three (1961), something few other directors could have even attempted, hardly immoral or smutty, where this is really fairly benign and no worse than other pictures. Vastly underrated, what is perhaps most surprising, and may have been lost on initial audiences, is Wilder attempted to write a genuine sex comedy about a mainstream, small town marriage that was more about what held the couple together in marriage than what kept them apart, brilliantly using a spoof on Dean Martin as a Rat Pack swinger (Dean Martin And The Rat Pack) in an attempt to expose America’s love of celebrity as little more than sexual hypocrisy, meant to heighten the suspense and raise the salacious level of comic expectations, but then throws in a heavy dose of reality like a cold shower, where the couple’s real feelings are exposed by actually downplaying the adulterous sex angle. Underneath it all, filled with a musical stream of Gershwin tunes, the film has a heart.


Martin’s lecherous lounge act is clearly a parody of his celebrity, always seen with a drink in his hand, suggesting young showgirls are all clamoring to sleep with him, where keeping up with the likes of Frank Sinatra and Sammy Davis Jr. in the Rat Pack is one long unending party of drinks and wild girls, where what Martin does really well is throw out WC Fields style one-liners written by professional joke writers, giving his character a sense of suave sophistication. Wilder simply uses what he does in his act and places it a completely off-the-wall and absurd setting, placing Dino away from the bright lights and applause of Vegas, instead plagued with car trouble, driving his own rare 1957 Dual Ghia convertible (only 100 were built) that gets stuck in the tiny town of Climax, Nevada, where not much of anything ever happens. What’s a swinger to do? But really he’s been tricked by a couple of locals, piano instructor Orville J. Spooner, everyman Ray Walston from My Favorite Martian, a replacement for Peter Sellers who suffered a heart attack during the first few weeks of shooting, and a somewhat oafish but overeager car mechanic Barney, Cliff Osmond. The two write songs in their spare time, sending them away to various singers and publishers, but hear nothing back. Wilder wanted the songs to be awful, so awful they would be hilarious, so he asked Ira Gershwin if he and his brother George had ever written any real clunkers? Out of the files of shame come the unheard of Gershwin standards, “I’m a Poached Egg,” or “I’m Taking Mom to the Junior Prom Because She’s a Better Twister Than My Sister.” Dino’s arrival to Barney’s gas station appears heaven sent, so he hatches a plot to remove the fuel valve from his car to give the impression of serious car trouble, explaining it’s an overnight fix, but he can conveniently stay with Orville across the street, who has the entire evening to push their songs, hoping this is a surefire way to get rich quick. But because of his reputation as a womanizer, the obsessively jealous Orville doesn’t want Dino around his wife Zelda, Felicia Farr, so he intentionally picks a fight to get her out of the house, forcing her to spend the night with her mother while Barney picks up a girl from the Belly-Button Club just outside of town, where the neon sign outside reads “Drop In and Get Lost.” But not just any girl, it turns out to be Polly the Pistol, Kim Novak, who literally steals the show, a part-time hooker who has a trailer behind the club. Her job for the evening is to pretend to be Mrs. Orville Spooner and keep Dino and his constantly prowling fingers entertained, hoping he’ll buy a few songs along the way.


The plot thickens. While we get a taste of Orville playing “Sophia” at the piano, where the chorus returns over and over again like a bad dream, Dino is positively smitten with Polly and the so-called “Western hospitality” where over dinner with Chianti, Orville all but pushes her in Dino’s direction—anything to show him a good time. Delighted with the turn of events, drinking Chianti out of her shoes, Dino has his hands full. But refusing to be pawed, Polly shows unexpected outrage, “What right has he got to treat your wife like that?” Polly is no fool and is really touched by the romance sentiment in Orville’s songs, where she urges him to keep playing, completely changing the movie’s implications, as the hooker with the heart of gold is more interested in the long-term interests of the husband than the raunchy needs of the customer. Meanwhile, in what feels like a parallel world, poor Zelda has to face her mother, who is nothing more than a sour-pussed old hag (Doro Merande) who can think of nothing but non-stop criticism of her no good husband and her destroyed marriage. This verbal assault is hilariously cringe worthy, as she resembles the tyrannical ravings of the Wicked Witch of the East, which quickly sends her daughter back out the door in a return to her husband, where she sees through the window a lively and simply extraordinarily intimate dance between her husband and Polly (choreographed by Gene Kelly, who was just passing by the studio one afternoon), where they clearly seemed to be enjoying themselves, so what could she do? The night of sex and sin has a way of overshadowing Wilder’s real intent, establishing sex as a business, where sex and commerce are interchangeable, but things go awry when Orville starts seeing Polly as a person, not a commodity, so when Dino actually likes one of the more romantic ballads, like “All the Livelong Day,” Orville refuses to sell it, standing up for his pretend wife in this ridiculously fast paced sex farce, suddenly taking all the fun out of it, where Orville instead turns on Dino as a cad for making inappropriate, lurid advancements on his wife. “Whatever happened to Western hospitality?” he pleads as he’s being thrown out on his ass. But not to worry, the film follows Zelda instead, who turns out to be more than a handful, getting plastered at the local watering hole, ending up in Polly’s trailer just to sleep it off, where Dino arrives shortly afterwards, steered by the bartender to the trailer where all the “action” is. Having exchanged places with Polly, Zelda realizes what’s up and asks Dino to serenade her with a few choruses of her husband’s “Sophia.” Adultery within the marriage has a redemptive quality here, as being with an “other” only reminds each one of who they’re really missing. Love and romance wins out in the end, overshadowing all sins of the flesh, taking us all by storm with this wild little ride in the desert concocted by Billy Wilder.
Posted by dino martin peters at 7:07 AM

Hey pallie, likes you and me both pallie Matty....been wonderin' how our fellow Dino-holic has been...greats to hear from you 'gain...Keeps lovin' our Dino!

I'm A-OK pallie and I hope you and the rest of the Dino-holics out there are A-OK too. I've been busy but make no mistake..I do my best to catch up on my Dino reading. Thanks once again for all you do!

Hey pallie, likes thanks ever so much for all your Dino-encouragement pallie Matty. Be sure to check out tomorrow's Dino-gram 'cause I thinks you are 'specially gonna enjoys it. Keeps lovin' our Dino, and likes always such a pleasure to have you share some Dino-reflections!