Hey pallies, likes today is, I do believe, 'nother first for ilovedinomartin....a piece of Dino-prose taken from the online presence of none other then "The National Inquirer." Likes I knows that in the days when Dino was walkin' the earth, the Inquirer often featured articles 'bout our most beloved Dino, but don't remember seein' any Dino-tales since that time.

Anywho, from the pen of Mr. Murf the Surf comes a retellin' of how funny man Mr. Lou Costello helped out our Dino, durin' his early career, by bankrollin' our great man's
nose job...and signin' our Dino to a personal contract. And, the tale goes on to point out that our Dino partnered with Mr. Jerry Lewis, and from that point our Dino and Jerry "eclipsed" Lou and his partner Bud as America's fav comedy team.

Likes how cool of the pallies at "The National Inquirer' to bring back this great bit of Dino-history. Hats off to Mr. Murf the Surf, for resurrectin' this Dino-tale which surely will bring many many more into knowin', lovin' and honorin' our Dino! As usual, to view this in it's original format, likes just clicks on the tag of this Dino-gram. Dino-always, only, and ever, DMP

by Murph the Surf, NATIONAL ENQUIRER
Photography by: doc+furious_graphix 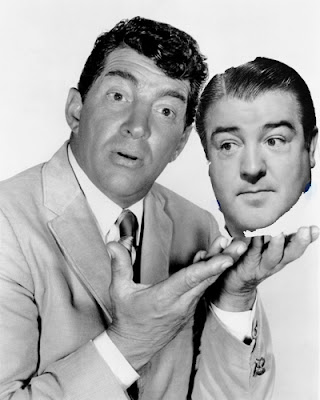 Funnyman LOU COSTELLO of “Abbott & Costello” signed an unknown DEAN MARTIN to a personal contract, paying for his nose job, but Dino dumped him for JERRY LEWIS!

Dino Paul Croscetti, Dean Martin’s real name – was singing solo during World War 2 when Lou Costello, on the hunt for fresh young talent, discovered him in a second-rate night club.

The wiley Costello who introduced The Andrews Sisters hit “Boogie Woogie Bugle Boy” to the world in the first A&C film “Buck Privates”, quickly signed Martin to a personal contract.

Not quite the idiot child he played onscreen Costello was a shrewd businessman and he saw that with a nose job, Dino would have the looks of a matinee idol and paid for his novice’s rhinoplasty.

During the 1940s Abbott and Costello were the unparalleled kings of all media- stage, radio, film but it was particularly galling to Lou when Martin teamed with another “idiot-child” comedian crewcut cutup Lewis.

Abbott & Costello movies were the biggest money makers of the 1940s were soon eclipsed by the post-war success of Martin & Lewis comedies of the `1950s where Dino played a boozy Abbott to Jerry’s hyper-kid Costello.
Posted by dino martin peters at 2:33 PM