‘The Dean Martin Variety Show’ is a testament to the early days of television when live programming was truly unpredictable.

Hey pallies, likes dudes I have been searchin' here, there, and everywhere all over the 'net for reviews of the recent release of the first set of "uncut" Dino-episodes.
Pallies likes musta still be soakin' in the Dino-glory of the full Dino-shows likes I 'em before they share their Dino-reflections. Anywho, 'though the followin' review is short in content, does thinks it is worthy of mention here 'cause it comes from our Dino's roots.

From the online presence of "CLEVELAND.COM" comes remuninations of the new Dino-release from Mr. Nathan Paige who scribes for the "poplife" section. 'Though Paige's words are brief, they are none-the-less brimmin' with devotion to our most beloved Dino.

It's so so clear that Nathan digs Martin and truly truly gets our Dino's modus operandi as the host with the most sayin' such insightful thoughts as... "Flexing his comedic timing and abilities to the hilt, Martin made it a habit to try and subtly ruin a comedian’s rehearsed routine, often resulting in unexpected laughter from the guest, as well as the studio audience."

Also, likes very very cool pallies that this Ohioan also gives a perfect plug for Dino-fest 2012 down the road in Stu-ville. Indeed, ilovedinomartin says thanks so so much Mr. Nathan Paige and the folks at "CLEVELAND.COM" for liftin' up Ohio's finest on the issue of "Dean Martin Variety Show - UNCUT." Thanks pallie for doin' your part to gets this thrillin' news out to the masses, helpin' them grow in their devotion to our amazin' man. To read this in it's original format, likes just clicks on the tag of these Dino-words. Deeply Diggin' Dino, DMP 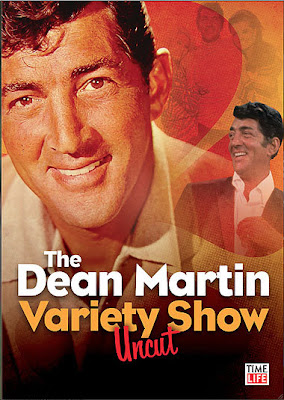 Just in time for the annual celebration of the Dean Martin Festival in Steubenville, Ohio, TIME LIFE has released the first collection of full classic episodes of ‘The Dean Martin Variety Show – Uncut’ on DVD. The 3-DVD set contains six complete and unedited episodes spanning from 1966-1971 (including the 1960s NBC peacock intro), back when variety shows were truly about talent, and not so much a dazzling stage show or set design.

‘The Dean Martin Variety Show’ is a testament to the early days of television when live programming was truly unpredictable. Cue card flubs (often intentionally misread by Martin); missed cues; going off script for bigger laughs; Dean Martin was quite the prankster on camera, and he thrived on keeping the atmosphere as spontaneous as possible by never having rehearsals. Flexing his comedic timing and abilities to the hilt, Martin made it a habit to try and subtly ruin a comedian’s rehearsed routine, often resulting in unexpected laughter from the guest, as well as the studio audience.

Each episode is jam-packed with appearances by many of the hot celebrities of the day – comedians such as Sid Caesar, Dom DeLuise, Buck Henry, Jackie Mason, and Allen & Rossi; vocal and/or dance performances by Abbe Lane, Leslie Uggams, Cyd Charisse, The Lettermen, Eddie Foy, Buddy Ebsen and many more. And, of course, Martin could break into song at any moment, performing some of his biggest hits.

There are also surprise cameos by guest stars hiding in Dean Martin’s closet – including Pat Boone and Robert Wagner.

I am,so ready to see these great great shows for the first time ever with everything included, only we want more and more

Hey pallie, likes Levi dude, likes dem are 'xactly my Dino-thoughts as well man! Thanks for droppin' some Dino-patter, and as ever, likes keeps lovin' our Dino!

I was Dean's housekeeper in the 80's and I have what I believe is a one-of-a-kind photo 16x20 of Dean in a red DINO hat that was made when he was going on tour w/Frank & Sammy before his son died and the tour was cancelled. If you're interested, contact directly: om92007 at yahoo