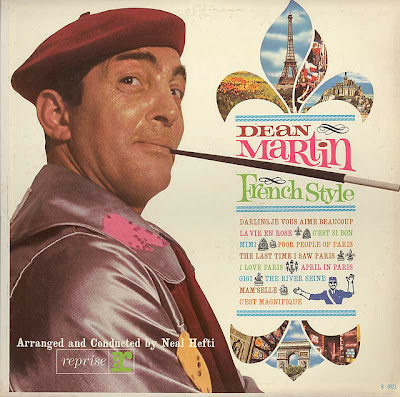 Hey pallies, likes on this day-before-Dino-amore-day we celebrate a very very important date in all of Dino-history! From our Dino-devoted pallie Mark at his swingin' blog "popculturefanboy," we learn that it was exactly 50---count 'em---50 years ago this very Dino-day that our Dino said no to renewin' his recordin' contract with the pallies at Capitol Records, in order to say yes to his best pallie, Mr. Frank Sinatra, who was in the throws of beginnin' his own recordin' company Reprise Records...the first recordin' pad to be totally totally owned by a musical artist.

In sayin' no to Capitol and yes to Mr. Sinatra, our Dino told hold of his own musical recordin' destiny, as he also began Claude Productions in order to keep total total ownership and rights to any and all of his recorded al-b-ums. Certainly this was a extremely wise move on the part of our most beloved Dino...showin' love to his pallie Frank...bein' a huge name to be signed by Reprise Records, and showin' love to himself and doin' thin's his way.

How cool is it that today we get to celebrate the amore of friendship and the amore of self on this 50th anniversary of our great man's great change in his recordin' destiny. ilovedinomartin shares our great appreciato to our Dino-lovin' pallie Mark for helpin' Dino-philes like us be able to know and celebrate this amazin' dates in Dino-history. To view this in it's orginal format, likes just clicks on the tag of this Dino-gram. Dino-celebratin', DMP ...btw pallies, likes the pix that graces this Dino-post is the cover of the first al-b-um that our Dino released on the Reprise label.

50 Years Ago Today In 1962 - After releasing 11 albums with the label, Dean Martin refuses to renew his contract with Capitol Records. Martin will sign with Reprise Records and start his own production company, Claude Productions, so that he can keep all rights and exclusive ownership of his work from then on.
Posted by dino martin peters at 7:07 AM