Hey pallies, likes after just postin' the Dino-historical note 'bout our Dino changin' his allegiance from Capitol Records to Mr. Sinatra's new Reprise Records label, likes I decided to do just a little Dino-research to see if I coulda find an overview of our Dino's recordin' history at Reprise.

Well, likes didn't take more that a couple of seconds to happen on a very very cool bit of Dino-prose tagged "DEAN MARTIN On Reprise: Reprised." Scribed by a dude tagged Mr. Shaun Dale for the cool cool mag "Cosmik Debris," the stunnin' photo and prose Dino-essay is so so full of amore to our Dino. Mr. Dale "is a freelancer in several walks of life: political consulting, public relations, and writing taking up the bulk of his time and energy." And might I add a true devotee of our most beloved Dino!

Likes pallies, you simply musta drop whatever you are doin' and study this Dino-document...it provides tons of great Dino-info and great great insight into our Dino's musical career for his pallie Frank's wonderful musical label. To view this in it's original format, likes just clicks on the tag of this Dino-message.

ilovedinomartin is thrilled to have found this stunnin' Dino-article and thanks Mr. Shuan Dale and the pallies at "Cosmik Debris" for showin' such pure, deep, and true Dino-devotion to our great man. Dino-awed, DMP 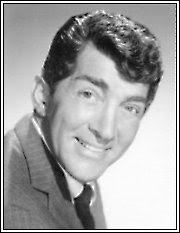 Though his career didn't suffer the collapse that many predicted with the 1956 dissolution of his partnership with Jerry Lewis (noteworthy film appearances in "The Young Lions" and hit records like "Memories Are Made Of This" and "Return To Me" provided ample solo credibility), Dean Martin's last years with Capitol Records were beginning to show diminishing returns. '58's "Volare" was his last top 40 track for the label, which was a significant decline for an artist who had scored a top 20 song nearly every year for the preceding decade, and who had landed a #1 hit just two years previously.

When his "pally" Frank Sinatra left Capitol to form the new Reprise Records in 1962, Martin was one of the first to follow, bringing both his talent and his bankbook along. His first Reprise release, French Style, appeared in April, followed closely by Dino Latino in October. Neither produced that elusive hit single, though, and Martin was soon back in the studio. 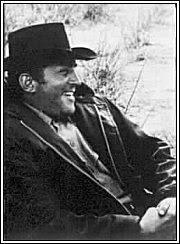 His next releases, Country Style and Dean "Tex" Martin Rides Again, appeared in January and April of 1963, revealing Martin's affection for country music and his skill at negotiating the "countrypolitan" sound that was then in vogue. With his success in western films and his laid back style, country & western material seemed to fit Martin as well or better than the Italian songs he had so often scored with, but again, while Country Style found a spot on the album charts, the hit singles didn't appear. It was while recording Dream With Dean for a June, 1964, release that he covered an old number from the Sinatra book, "Everybody Loves Somebody," with a low key arrangement featuring Barney Kessel's guitar. When Martin took son Dino, Jr.'s fascination with the ascendent Beatles as a challenge, he and producer Jimmy Bowen plucked that song from the album for a beefed up arrangement and released a second album in the same month named for the song the two shared in common. Amazingly, despite nearly simultaneous release, both albums charted. More significantly, Dean Martin was back in the pop singles charts with his first #1 record since 1956, dislodging his son's heroes from the spot they'd held with "A Hard Day's Night." 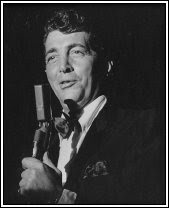 He returned to the charts promptly, with "The Door Is Still Open To My Heart" climbing to #6 by September, the album of the same name appearing in November. That was three album releases in 1964 alone, and seven in the two years since Martin had joined Reprise. For a man who seemed to live in a permanent slouch and never seemed serious about anything, that was an incredible output. If Dean Martin was successful, he worked harder for that success than his persona implied. Perhaps it was the experience of the young Dino Crocetti from Steubenville, Ohio that made any show business endeavor seem like something less than work to the adult Dean Martin. Certainly his experiences as a millworker, gas jockey, bootlegger and prizefighter carried more effort and/or risk for less reward than rolling into the studio to croon out a best selling LP. That wasn't all he was up to, of course. During that same two year period, he appeared in starring roles in 6 of his 51 films and was in the process of joining his Rat Pack pallies in taking virtual title to the Las Vegas strip.

Martin was back with another hit single before the end of the year with "You're Nobody 'Til Somebody Loves You," which helped the January '65 release of Dean Martin Hits Again reach #13 on the album charts. The album produced another top 40 entry with "Send Me The Pillow That You Dream On." He followed in September with (Remember Me) I'm The One Who Loves You, a #12 album that produced another top 40 hit with the title track. There was one more album for 1965, though, and it would climb higher yet, to #11, on the back of another pair of hit singles, the title track, "Houston," and the top ten hit, "I Will." 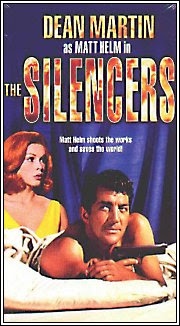 While Houston was climbing the charts, Dean Martin was busy conquering yet another entertainment avenue. The Dean Martin Show premiered on NBC in the fall of 1965 and promptly established itself as the TV season's biggest new hit and Dean Martin as the '60s version of the King of All Media. He had also started a new film series, featuring Dino as Matt Helm, secret agent extraordinaire. His soundtrack album for the first Matt Helm movie, Dean Martin Sings Songs From "The Silencers," was released in March and, predictably, found a spot on the charts. In November, The Dean Martin TV Show appeared in LP form, and settled into the #34 spot on the album charts with 10 tracks featuring Martin with his TV bandleader, Les Brown and his Band Of Reknown. In a mere 4 years at Reprise, Martin had produced 12 LPs, with 9 making the charts, and 9 top 40 singles to match. Those partial to his Capitol years might consider that it took him 8 years to reach similar landmarks there, and there were no Beatles, Beach Boys or Rolling Stones to contend with. 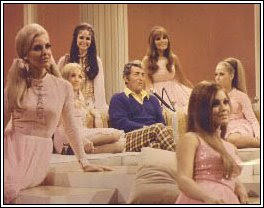 The occasion for this trip down memory lane is the appearance of each of the albums I've mentioned in a new series of two-fers from Collector's Choice Music. This is truly a landmark reissue venture. Because of a combination of Martin's stature and savvy, he retained ownership of all of his Reprise recordings, and this is the first US release of this material on CD (some of it has appeared in Europe on an earlier greatest hits package and in a typically astronomically priced Bear Family set). With each disc holding two full albums, along with original cover art and liner notes, and brief historical notes with release and chart data, they are both superb values and invaluable documents of one of the great catalogs of American popular music. Finally licensed for release by Martin's heirs, who have held the rights since his death in 1995, these are the first six releases of a planned 12, which will put 24 of his Reprise releases in long overdue general circulation. The remastering is superb, the music ranges from interesting to exceptional, and your prompt acquisition is highly encouraged. 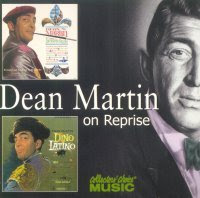 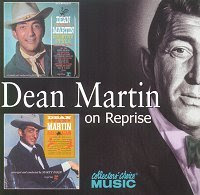 (Country Style) I'm So Lonesome I Could Cry * Face In A Crowd * Things * Room Full Of Roses * I Walk The Line * All My Heart Cries For You * Any Time * Shutters And Boards * Blue, Blue Day * Singing The Blues * Hey, Good Lookin' * Ain't Gonna Try No More (Dean "Tex" Martin Rides Again) I'm Gonna Change Everything * Candy Kisses * Rockin' Alone (In An Old Rocking Chair) * Just A Little Lovin' * I Can't Help It (If I'm Still In Love With You) * My Sugar's Gone * Corrine Corrina * Take Good Care Of Her * The Middle Of The Night Is My Cryin' Time * From Lover To Loser * Bouquet Of Roses * Second Hand Rose (Second Hand Heart)

Dream With Dean/Everybody Loves Somebody: 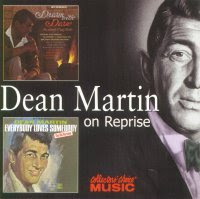 (Dream With Dean) I'm Confessin' (That I Love You) * Fools Rush In * I'll Buy That Dream * If You Were The Only Girl * Blue Moon * Everybody Loves Somebody * I Don't Know Why (I Just Do) * "Gimme" A Little Kiss Will "Ya" Huh? * Hands Across The Table * Smile * My Melancholy Baby * Baby Won't You Please Come Home (Everybody Loves Somebody) Everybody Loves Somebody * Your Other Love * Shutters And Boards * Baby-O * A Little Voice * Things * My Heart Cries For You * Siesta Fiesta * From Lover To Loser * Just Close Your Eyes * Corrine Corrina * Face In A Crowd

The Door Is Still Open To My Heart/(Remember Me) I'm The One Who Loves You: 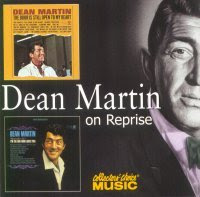 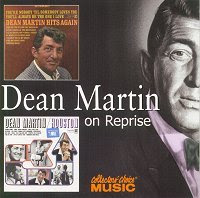 (Dean Martin Hits Again) You're Nobody Till Somebody Loves You * I'll Hold You In My Heart * Have A Heart * My Heart Is An Open Book * You'll Always Be The One I Love * Send Me The Pillow You Dream On * In The Chapel In The Moonlight * Send Me Some Lovin' * Wedding Bells * I'll Be Seeing You (Houston) Houston * The First Thing Ev'ry Morning * Hammer And Nails * Little Lovely One * Love, Love, Love * I Will * Snap Your Fingers * Everybody But Me * Old Yellow Line * Detour * You're The Reason I'm In Love 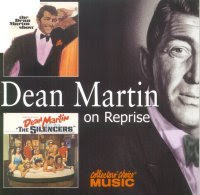 (The Dean Martin TV Show) If I Had You * What Can I Say After I Say I'm Sorry * The One I Love (Belongs To Somebody Else) * S'posin' * It's The Talk Of The Town * Baby Won't You Please Come Home * I've Grown Accustomed To Her Face * Just Friends * The Things We Did Last Summer * Home (Dean Martin Sings Songs From "The Silencers") The Glory Of Love * Empty Saddles In The Old Corral * Lovey Kravezit * The Last Round-Up * Anniversary Song * Side By Side * South Of The Border * Red Sails In The Sunset * Lord, You Made The Night Too Long * If You Knew Susie * On The Sunny Side Of The Street * The Silencers