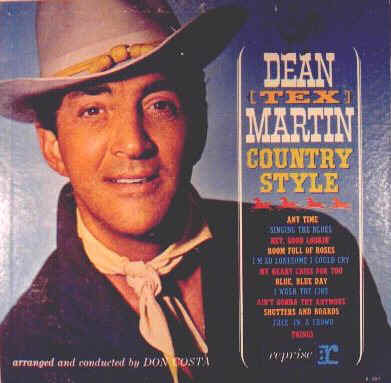 Likes this Dino-country focus on the part of Mr. Kienzle is all a part of celebratin'
his podcast of Dino-country classics that I am likes listenin' to as I scribe this Dino-message. Gotta tell you pallies Kienzle has created a brief but totally stunnin' trib to our great Dino "Tex" Martin. If likes you clicks on the tag of this Dino-gram you will goes to the original postin' of this article where you can click on the link to catch Rich's "Believe Your Ears" Dino-country celebration!

Double Dino-appreciato to Mr. Rich Kienzle and the pallies at "Community Voices" for offerin' up this second dose of Dino-country-amorin'! How great durin' Dino-amore-month to see such Dino-lovin' comin' for our country lovin' Dino! Dino-devotedly, DMP

Today's Believe Your Ears music podcast looks at the best country recordings of Dean Martin. Here's some more video from his famous TV show of him with various Nashville and country music guests.

He and Glen Campbell team up for "You Are My Sunshine."

Dean in the early 50's singing "Hominy Grits" from the Colgate Comedy Hour he and Jerry Lewis co-hosted.

From the NBC show singing Bill Anderson's ballad "Tip of My Fingers."

On a fairly out of control segment with comedian and 50's TV show host George Gobel, who started his career as a kid singing on the famous country radio show the WLS National Barn Dance as singer "Little Georgie Gobel."

Posted by dino martin peters at 7:15 AM

Love that video of our Dino with Tennessee Ernie!

Man o man pal...I love ALL these tunes! NO ONE does country like Dean. As a matter of fact...the ONLY country music this pallie listens to is "Tex" Martin!

Hey pallie, likes I', with you Danny-o...the only country likes I dig is the Dino-tunes....did you get to listen to the podcast yet...it is simply Dino-superb! Keeps lovin' our Dino!