I have always been a fan of Dean Martin.

Hey pallies, 'nother day of Dino-amore-month, 'nother wonderful op to share with you more amore to our most amorin' Dino! Today we return to the blog "Rooftop Reviews," where our newly discovered pallie Mr. Robert Williams holds forth. ilovedinomartin featured some Dino-devotion by Williams on the last day of January when Robert shared some keen Dino-insights to a classic clip of our Dino from 1964 and Williams described our Dino-croonin as "jazz-like, soulful, earthy, and bluesy."

Well then and there ilovedinomartin decided to dig deep into the archives of "Rooftoop Reviews" to see likes if we coulda uncover some more Dino-admiration...and we discovered the Dino-patter below where Williams reviews the deluxe cd set "Dean Martin - The Capitol Years."

Loves, loves, loves the way that Mr. Robert begins his Dino-report with..."I have always been a fan of Dean Martin. I love the arrangements and of course, the singing." Ain't it the coolest to know that this retired engineer has had a life-long love affair with our most beloved Dino!

This is a Dino-collection that is in my possession, but one that I have not done a lot of listenin' to....so much Dino...so little time...but after readin' Mr. Williams amore of this release certainly gonna have to give it more of my Dino-attentinado! Mr. Williams makes just one faux pas in sayin' the name of the wrong Dino-classic that knocked that busted the Beatles of the charts...but no big problemo, 'cause he got that Dino-detail correct in his previous Dino-reflections.

Always such a pleasure to meet up with and share 'nother guy who loves our Dino and shares his Dino-affection in such bold ways. So, thanks ever so much Mr. Robert Williams for this outstandin' Dino-effort. Tov view this in it's original format, as usual, just clicks on the tag of this Dino-patter. Dino-always, DMP 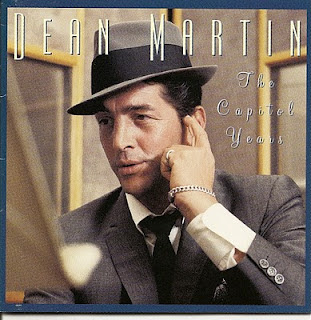 I have always been a fan of Dean Martin. I love the arrangements and of course, the singing. Dean Martin is one of the "whiskey throated" smooth voiced singers of the 1940's through the 1960's. Along with Nat King Cole, Mr. Martin was largely influenced by the sound of Bing Crosby in his phrasing of the lyrics, as compared to the earlier stylings of singers such as Rudy Valee. That difference in styling marked the change from "crooning" to what we now consider real singing.

This double CD has it all, including Nat King Cole and Dean Martin's rousing duet of "Open Up the Dog House" to Dean Martin and Jerry Lewis singing "Every Street's a Boulevard", from the 1954 soundtrack of "Living It Up." The pop hits with orchestral backings are a refreshing change from the Top 40 sounds that comes over today's radio. They don't write songs like "I'd Cry Like A Baby" anymore. I'd wager, that if that recording were ever released as a single today, it would top the charts. Laugh if you will, but remember, this is the voice that knocked The Beatles off of the Top Ten in the summer of 1964 with "You're Nobody Til Someday Loves You." Who'd have thought?

Some of my favorite tracks, as usual, are the "previously unreleased" stuff, which gives you a chance to see where the hits came from. It's a glimpse into the creative process that lends an extra attraction to the listening experience. It's the stuff I prefer to hear in my car, where it all seems so personal.

The disc covers every genre of Mr. Martin's unique talent during the years 1949 - 1957. It includes such hits as "Sleepy Old New England Town" and "Solitaire", with their sweet sentimentality, to the rollicking renditions of "Beau James" and "Good Morning Life." And with 40 selections to chose from this collection still manages to keep you in the mood for more.
Posted by dino martin peters at 7:11 AM