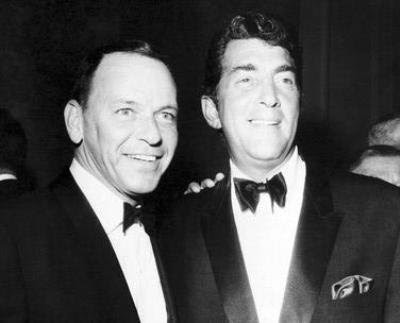 Hey pallies, sometimes it is likes so amazin' how one Dino-post will links to 'nother. On this 16th day of Dino-amore-month, we goes to the pad "Venture Beat" where Mr. Lou Hoffman,CEO of The Hoffman Agency, reviews the new book, "Tell To Win" by Mr. Peter Guber.

Among Mr. Guber's credentials is that he was head of Columbia Pictures,now Sony Pictures Entertainment. And today's Dino-post shares a tale of Guber's encounter with our Dino and the frankie when our great man was workin' on a picture for Columbia. Seems that Guber had some bone to pick with our beloved Dino and he went on the set to confront our Dino and to tell him to "shape up." Well, the frankie intervened and simply proved the point that Miss Shirley MacLaine made in yesterday's Dino-gram. As you recall Miss MacLaine said...
"People were basically afraid of Frank. They weren't afraid of Dean."
As you will read below you will see why pallies were frightened by the frankie.

Gotta say two thin's 'bout the frankie's action...certainly it shows his penchant for negative behaviour, but in the more possitive mode, it truly shows the frankie's deep love for our beloved Dino..but likes who among us Dinoholics wouldna done the same thin' to defend our great man....

Been searchin' the net for more info on this new book and this Dino-tale. When and if I comes up with me likes I will certainly shares it will all you dudes. To read this whole review, just clicks on the tagg of this Dino-post. ilovedinomartin sez our thanks to Mr. Peter Guber, Mr. Lou Hoffman, and the pallies at Venture Beat for sharin' this Dino-vignette with the larger Dino-world. Dino-only-devoted, DMP

We learn Guber went on the movie set to tell Dean Martin to shape up only to have Frank Sinatra intervene with a “Who the hell are you?” before physically pushing him out the door.
Posted by dino martin peters at 8:46 AM