Natty of suit and jaunty of step, Frank Sinatra and Dean Martin are pictured here arriving at London airport in 1961..........

Hey pallies, there's great Dino-news this Dino-day as Dino-usual. Likes today's Dino-love comes from the Brit pad "whatsontiv.co.uk" and it's feature "Movie Talk. From the pen of Mr. Jason Beston we learn that the swingin' Getty Image Gallery in London has just put up a cool new collection of pixs.

Tagged "Love from London: A City of Stars, this "stunning new exhibition" is chocked full of "evocative images" includin' this featured one of our Dino and the frankie:
"Natty of suit and jaunty of step, Frank Sinatra and Dean Martin are pictured here arriving at London airport in 1961 – a year after making cult caper comedy Ocean’s 11."

Words can not express my likes total Dino-pleasure that Mr. Beston has chosen this amazin' pix of our Dino and his pallie to be featured in his Dino-report...just makes me wonder what other stunnin' and evocative pixs of our Dino mighta be included in this exhibit!?!?!? Likes I woulda loves to travel to London to view this in person.

We sez our thanks to Mr. Jason Beston for sharin' this great news with us and hopes that many many Brits will be drawn to true Dino-devotion likes from viewin' this exhibit.... To view this in it's original format, just clicks on the tagg of this here Dino-gram. Dino-desirin', DMP


Love from London: A City of Stars
Published by Jason Beston August 25, 2010 in News and Special Events. 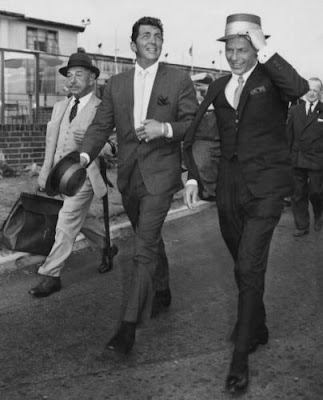 Natty of suit and jaunty of step, Frank Sinatra and Dean Martin are pictured here arriving at London airport in 1961 – a year after making cult caper comedy Ocean’s 11.

This is just one of the evocative images in Love from London: A City of Stars, the stunning new exhibition at the Getty Images Gallery.

From Audrey Hepburn in Richmond Park, Elizabeth Taylor feeding the pigeons in Trafalgar Square and Brigitte Bardot travelling on the tube, to Alfred Hitchcock posing outside the British Museum and Marilyn Monroe at the Savoy Hotel, the exhibition captures some of the silver screen’s most iconic stars at work and play in the capital - and shows off the city to great advantage too!

Love from London: A City of Stars runs at the Getty Images Gallery, 46 Eastcastle Street, London W1W, from 26 August to 9 October.
Posted by dino martin peters at 7:25 AM